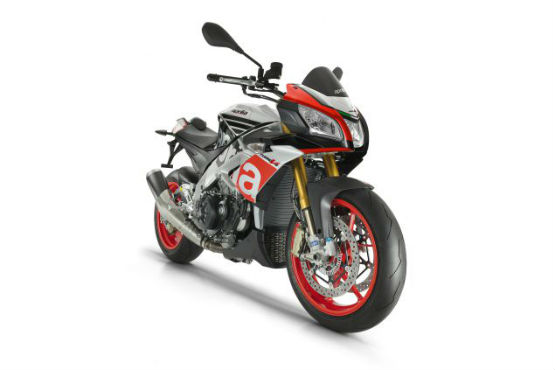 The Internet and its spies have yet again leaked an image of the Aprilia Tuono V4 1100 in its factory RR guise, a week before its debut at EICMA in Milan. The flagship street-fighter from the Italian brand is an update over the Tuono V4 R APRC ABS and will feature enhanced form and function.

On the powertrain front the V4 1100 has had its four cylinders bored-out, with dimensions of 81 x 52.3 mm, churning out 177 PS, with torque maxxing out at 120 Nm. The 110-cc increase has resulted in an overall performance bump of 10 PS and 9.5 Nm. In terms of ergonomics, the seat has been lowered by 15 mm, the handle bars have also been lowered and the windscreen is set a little higher than its predecessor. The cosmetic update will include sportier graphics and sharper cuts and slashes all across.

The APRC Electronics package has been retained to restrict wheelies and wheel-spin. The 2015 model will retain the Öhlins suspension in addition to all performance parts. ABS comes as standard and braking duties will be taken care by Brembo callipers biting into steel discs. Price details will be revealed at the actual event in Milan.