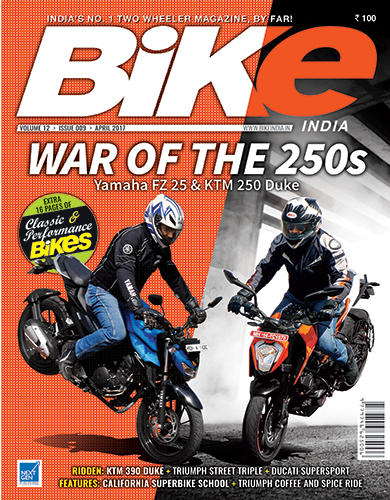 Limping Back to Normality

The two-wheeler market is limping back in the wake of the effect of the recent demonetisation. Last month I rode three new motorcycles: the Yamaha FZ25 (250-cc), and KTM 250 and 390 Duke. It was at the same venue in Goa in 2008 that the FZ16 was launched and at that time I had suggested that they should have put a 250-cc engine instead of the 160-cc motor.

The KTM 250 Duke has been launched to counter the imminent BMW 310. The 250 runs taller gearing to make it subdued, so it is not as aggressive to ride like its 200 sibling. The 200 and the 390 easily hit the rev limiter in sixth gear whereas the 250 does not manage to do this in fifth or sixth gear. The new 390 has improved tremendously over the outgoing model. Read our first impression in this issue.

British motor sport had suffered a blow on 10 March 2003 when the last British 500-cc world champion Barry Sheene passed away. Now on this very same day this year John Surtees, the only person to have won world championships on two and four wheels, also passed away. I was fortunate enough to have met him at the Isle of Man TT during the centenary year of that great event in 2007. He had brought his world championship winning 500 MV Agusta for the Lap of Honour. May his soul rest in peace.

Over the Holi weekend I rode the beautiful Triumph ThruxtonR and it brought back some really fond memories; when I was growing up it was bikes like this that I used to dream of.