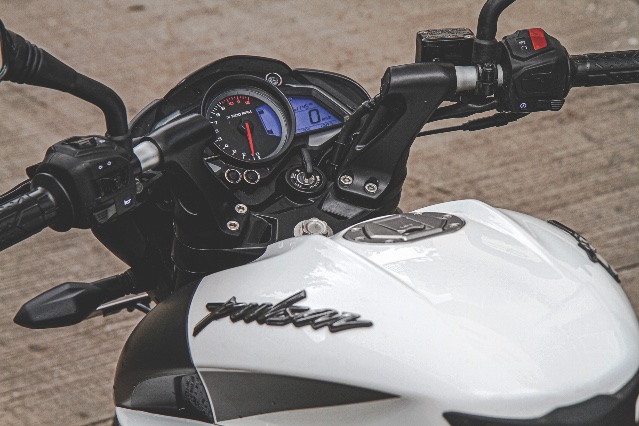 Picture of Bajaj Pulsar NS200 for representation only

The Bajaj Pulsar 250 will be the largest-capacity Pulsar ever, with an all-new engine, chassis and suspension, the price is expected to be announced on 28 October.

Earlier this year we revealed that the iconic sports motorcycle brand – Bajaj Pulsar, is being given a major overhaul. The original Pulsar engine has not received a major update in the new millennium and it had to borrow the base of the powertrain from its sibling, KTM. This changed the much-loved Pulsar’s character and brought it closer to the high-revving KTMs. Die-hard Pulsar fans still miss the torquey nature that the original Pulsar 220 had and most buyers continued to buy it, preferring it to the newer Pulsars.

It’s official now that an all-new Bajaj Pulsar 250 is on its way and, although it will be modern in most ways, the 2021 bike will retain the first generation Pulsar 220’s charm and charisma. The Pulsar 250 is based on a new platform and powered by a new engine developed in-house by Bajaj Auto and not borrowed from their sibling KTMs. Unlike the Pulsar NS 200, the new model will not be equipped with a perimeter frame; instead it will get a single-downtube chassis with standard telescopic front fork and a rear monoshock.

We expect Bajaj to introduce close to three versions of the bike, a naked NS250, a semi-faired Pulsar 250F, and a fully-faired Pulsar RS 250. The NS250 will retain a similar design philosophy, like the rest of the NS models and the Bajaj Pulsar 250F will be more muscular and heftier and, as mentioned, will also sport a small fairing like the Pulsar 220F. It promises to get stylish tank extensions, a split seat, a sharp belly-cowl, and a proper upswept exhaust while the headlamp, tail-lamp, and indicators are expected to be LEDs. While the RS 250 hasn’t been
spotted yet we expect it to sport a proper fairing, like the previous RS 200, and will be the bulkiest of the lot.

Currently, the Pulsar range consists of bike between 125-220-cc. The new Pulsar will be largest-capacity Pulsar yet. Bajaj have developed a new 250-cc, single-cylinder engine that will be air-cooled and not liquid-cooled as in the current Pulsar NS 200. Our guess is that it will produce around 25 hp and close to 22 Nm of torque and will come mated to a six-speed gearbox. Also, it will be a twin-valve, SOHC engine with Bajaj’s trademark dual-spark ignition and not the triple-spark technology. These, along with a simpler frame, will help Bajaj make the Pulsar 250 more accessible than the KTM 250 Duke, which is about Rs 50,000 more expensive than other 250-cc models.

We expect more details to emerge soon, as the launch date of 28 October nears. So, watch this space.