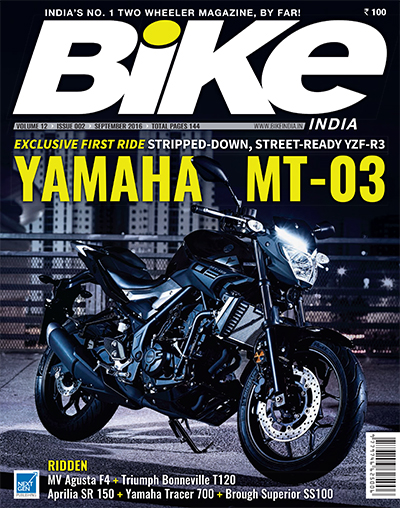 THE LONG-AWAITED GST BILL HAS FINALLY BEEN PASSED BY the Parliament. As to what this will hold for the end-user is still not clear, but it will definitely help the manufacturers because it will simplify the tax structure and, therefore, doing business will become that much easier. The price of twowheelers may come down but one of the biggest problems is the road tax that is levied by the state government which makes a lot of difference to the on-road price from state to state.

A new Bill has been passed for higher fines for traffic offences but will we ever see the day when one can use a bike anywhere in the country without having to re-register it when you move from one state to another? This will reduce a lot of heartburn for two-wheeler owners, besides curbing corruption. The government says ‘one country, one tax’. By the same token, the vehicle registration process should also be centralised. An additional benefit of such a move would be that a two-wheeler could be traced to its owner irrespective of which state it was registered in.

The state governments are likely to argue that they will lose out on the road tax. The solution to this is the charge of a one-time registration fee with inclusion of the road tax in the price of fuel. This way the owner of a big bike will have to pay more as compared to that of a small and fuel-efficient commuter motorcycle. This will also mean that you pay for the maintenance of the roads you use.

Last month I lost a dear friend and fellow biker in a road accident because a two-wheeler rider did not want to travel that one kilometre to take a U-turn and jumped the divider. While trying to avoid him Dr Santosh Tholar clipped the rear of the fellow’s bike and crashed, dying instantaneously in the accident. He lost his life due to somebody else’s mistake. May his soul rest in peace.