The 2021 Suzuki Hayabusa is the third-generation model of this legendary motorcycle and has made it’s global unveil recently. 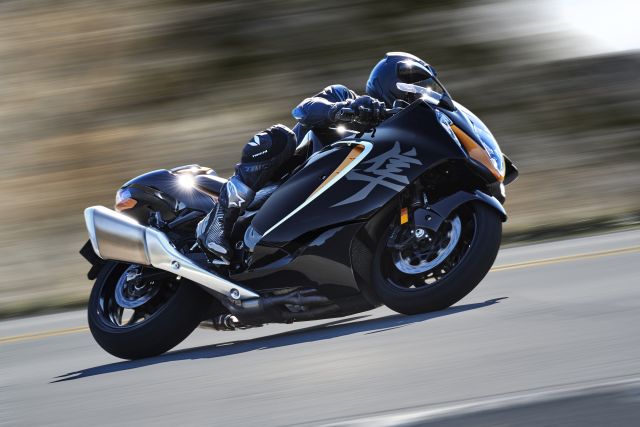 Legacy
The Suzuki Hayabusa is one of the most popular names in the history of the world of motorcycles. First introduced in 1999, the bike made quite a name for itself, being one of the fastest road-legal production motorcycles on sale. The bike was designed with the objective of creating a motorcycle that would be the fastest in the hypersport motorcycle segment. Mainly, Suzuki wanted to compete with the Honda Blackbird, which was one of the fastest bikes of its time. Hayabusa is a Japanese word that means Peregrine falcon. This is a bird that is known for its really fast diving speed during flight. It can attain more than 300 km/h (186 mph), thus making it not only the world’s fastest bird but also the world’s fastest animal. 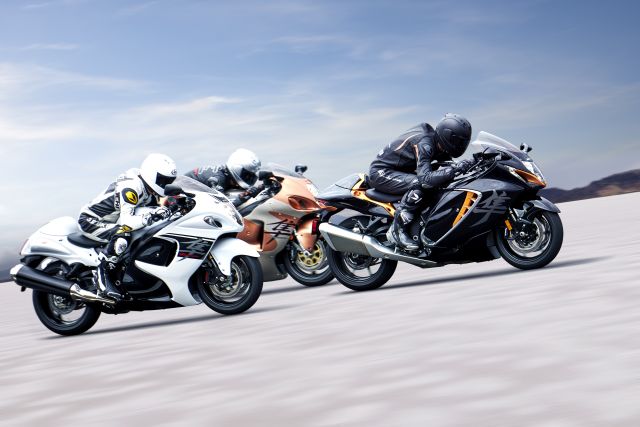 The first-generation ‘Busa had a top speed of 312 km/h, which made it one of the best motorcycles of its time. In the same year, an agreement was signed between the Japanese and European manufacturers to limit the speed of motorcycles. They came to a decision to limit the top speed to 299 km/h. The second-generation model was introduced in 2007 and received few engine upgrades and ECU re-tuning. This engine put out an astonishing 200 hp and 154 Nm of peak torque. With this model, the ‘Busa improved in acceleration; however, it did not become faster in terms of top speed due to an increase in the weight. 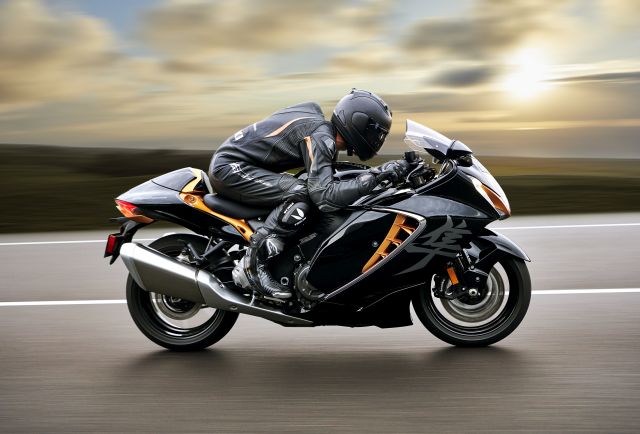 After a gap of almost 14 years, Suzuki recently unveiled the latest generation of the Hayabusa. Here is all you need to know about the third-generation model.

Design and Styling
As we can see, the 2021 Suzuki Hayabusa sports a couple of minor changes to the design language for 2021 — the bike sports all-around LED lighting, gets a re-designed tank, and an aerodynamically improved front fairing. This new fairing flows uninterrupted from the front, across the tank, and off the upswept tail, which honours the legacy of the ‘Busa’s low, long, and wide stance. Apart from these, we also see the bike sporting new exhausts which are now longer and fully chrome-plated. Overall, the bike retains the silhouette of the original but now has a more aggressive stance. There are newly designed seven-spoke alloy wheels, which, Suzuki say, contribute to greater handling stability. It will be sold in three colour options: Glass Sparkle Black/Candy Burnt Gold, Metallic Mat Sword Silver/Candy Daring Red, and Pearl Brilliant White/Metallic Mat Stellar Blue. The bike now has a kerb weight of 264 kilograms.

Engine
The updated Hayabusa draws its power from a Euro 5-compliant (BS6) 1,340-cc, in-line four-cylinder motor. There were rumours earlier that the new iteration would pack a more powerful 1,400-cc engine. Such, however, is not the case. The upgraded 1,340-cc motor puts out 187.7 hp at 9,700 revolutions per minute and a peak torque of 150 Nm at 7,000 rpm. It is mated to a six-speed gearbox with a bi-directional quick-shifter. This new engine features a ride-by-wire electronic throttle system and a revised intake and exhaust mechanism which, Suzuki say, will help with enhanced output and torque in the low-to-mid speed range. Inside, there are new pistons and connecting rods which reduce the weight of moving parts within the engine. Apart from these, changes have also been made to the crankshaft oil passages, which, according to Suzuki, improve engine lubrication. 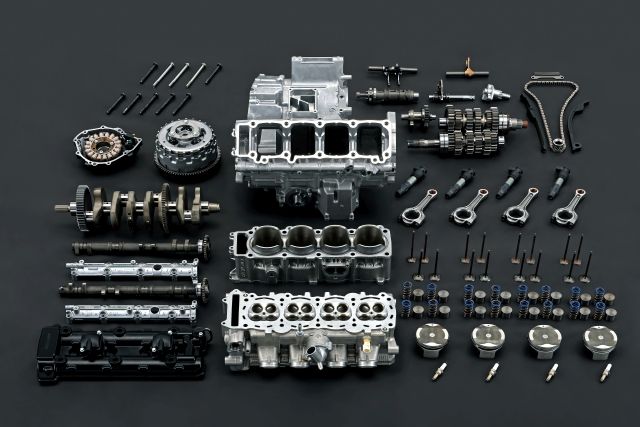 Electronics
What many will appreciate is the fact that Suzuki have retained the original look of the instrument cluster. One standout feature is the new TFT LCD panel mounted in the centre. The bike also has a newly installed Suzuki Intelligent Ride System (S.I.R.S.) that features Suzuki Drive Mode Selector Alpha (SDMS-α) which enables riders to select pre-set patterns on five different electronic control systems, including Power Mode Selector, Traction Control, Engine Brake Control, and two other controls. The latest electronics and technology package includes ride modes, a quick-shifter, traction control, cornering ABS, and a six-axis IMU. Suzuki say that the bike now allows for a smoother power delivery and nimbler handling and the collection of electronics makes it a more controllable and predictable machine. 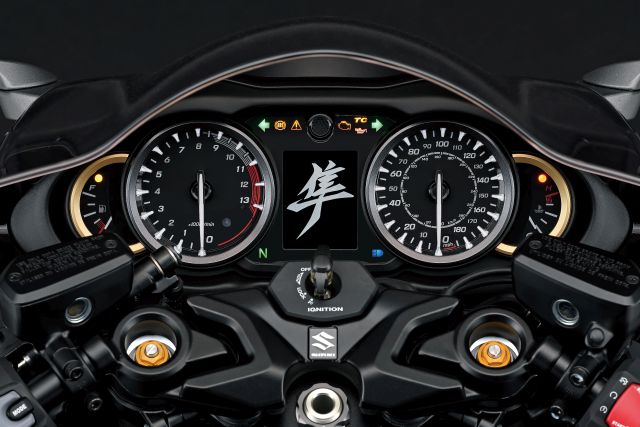 Suspension, Brakes, and Tyres
For 2021, the Hayabusa uses KYB USD front forks which feature diamond-like carbon (DLC) coating on the 43-mm outer diameter inner fork tubes to reduce friction and improve reaction to undulations in the road surface. Spring preload, compression damping, and rebound damping are all fully adjustable. Suzuki further say that the internal structure of the fully adjustable KYB monoshock rear suspension has also been revised to maximize comfort and straight-line stability. For stopping power, the ‘Busa gets top-spec Brembo Stylema four-piston calipers. They are paired with front discs with a diameter increased from 310 mm to 320 mm. At the rear, the bike uses a single-disc with Nissin, single-piston calipers. To meet the needs of the motorcycle, Suzuki have worked closely with Bridgestone to create the latest Battlax Hypersport S22 tyres. These new tyres boast of improved grip, performance in wet conditions, greater all-round traction, and agility while retaining a great level of durability. 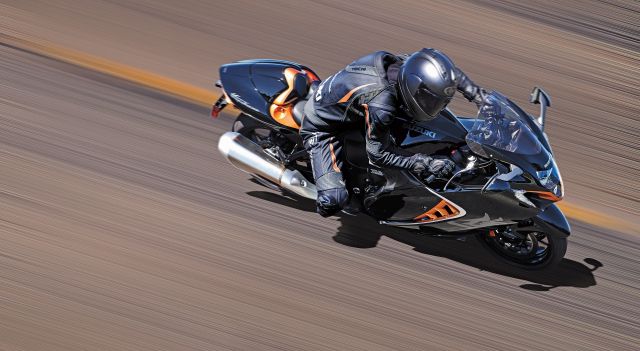 Price, Availability, and Accessories
Suzuki have begun sales of the Hayabusa worldwide, starting with Europe and followed by markets including North America and Japan. We may expect the motorcycle on our shores in the upcoming months. There are a variety of accessories on offer, including a touring screen, a single-seat cowl, carbon mirror covers, Akrapovič slip-on muffler, grip-heaters, billet brake and clutch levers, chrome-plated filler cap, and much more. The bike has been launched in India today for a price of Rs 16.40 lakh (ex-showroom). We wait with bated breath to ride the 2021 Hayabusa to tell you all about how it fares when compared to its predecessors. 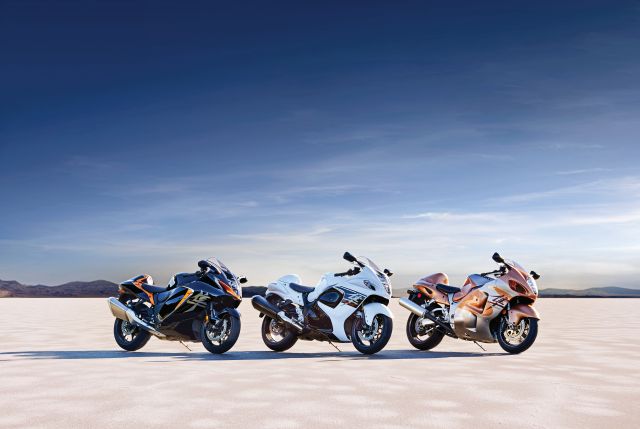