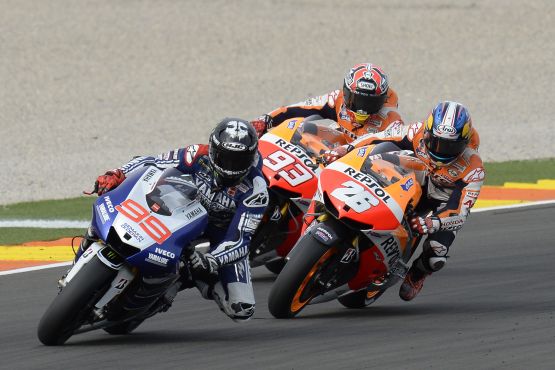 Fédération Internationale de Motocyclisme (FIM) have released the provisional entry list for next year’s MotoGP season. Though a majority of the contracts were settled mid-way last season, there were still a few question marks about the 2014 MotoGP grid. The provisional list features 11 names which will run under the factory rules, while the remaining 13 entries will form the open class.

As per the rules set by FIM for 2014 entries who will run as factory-riders will be allocated only 20 liters of fuel, 5 engines per season, and the freedom to use proprietary software on the spec Magneti Marelli ECU. On the other hand the remaining open class entries will have 24 liters of fuel and 12 engines per season, but will be forced to use the Dorna-controlled spec software on the Magneti Marelli ECU to compete.

The provisional list sees new MotoGP world champion Marc Marquez entered as number – 93, although being the world champion Honda is keen to see him run the number 1 plate. The 2014 season also sees newcomers like Pol Espargaro and Scott Redding both stepping up from Moto2.

Among the Open entries, all eyes will be on the battle between Nick Hayden’s Honda RCV1000R production racer and Aleix Espargaro’s Yamaha FTR open class entry.

The 2014 season looks set to be based on the pattern established in 2013, with Marc Marquez, Dani Pedrosa and Jorge Lorenzo likely to dominate, coupled with a few surprise packages on the way.