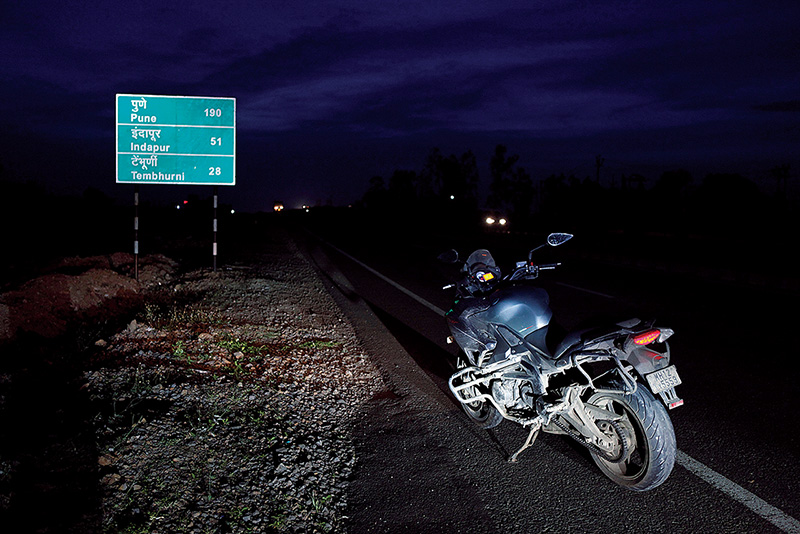 Piyush: Ahmedabad–Kalidevi (250 km)
The stretch of NH 59 from Ahmedabad to the Madhya Pradesh border via Godhra is a world-class highway. I covered the first 200 km of the day at an average speed of 80 km/h while the remaining 50 km took me over an hour. The highway is under construction on the MP side of state border and there are multiple diversions for almost 40 km before the highway gets better again.

Ryan: Kalidevi–Bhopal Bypass (450 km)
After we crossed Gujarat we hit bad roads, and, voilà, it was my turn to ride. Piyush gave me the bike and I rode it for the next 450 km. It was not an easy ride; there were potholes, diversions and quite a bit of traffic. I must say that the bike took quite a beating but it came out with flying colours none the less.

Sampat: Bhopal Bypass–Bhourna Road (120 km)
The road from Bhopal to Nagpur is a dual carriageway with a broken road in certain stretches. My pace wasn’t very high since I was riding in twilight but there were a few interesting stretches when the road passes the edge of the Satpura National Park.

Sanjay: Bhourna Road–Borgaon (120 km)
A short stint for me on day nine meant I got to relax a bit after being on the road for nine days. I took over the bike from Sampat just after crossing the small village of Bhourna, which was on NH 69. After covering the next 120 km, I pulled over just before crossing the village of Borgaon.

Harket: Borgaon–Nagpur (100 km)
“Hey, I wanna ride too, you know” – the magic words that got me into the power seat. The whole day goes by and I don’t even get to ride? That isn’t cool. What is cool is the Betul-Nagpur highway (NH 69). Four lanes of completely walled highway (no cows!), beautifully lit-up bridges, and a bike capable of giddy top speeds make for a perfect recipe for a blockbuster ride.

Ryan: Nagpur–Balkonda (330 km)
It was our home run this time and after nine days on the road, it felt good to make our way back. I proffered to do the first stint and rode for 330 km till the Hyderabad bypass. Thanks to the good roads I was able to maintain a decent cruising speed and made good time. It was my last riding stint and I enjoyed every bit of it. Throughout the challenge, the bike proved to be an all-round performer. I learned a lot during this trip and I had an amazing experience – one I will never forget.

Sanjay: Balkonda–Hyderabad Bypass (200 km)
Our last day, my last stint and I got to ride on probably what was the best road I had encountered during this long ride. It was also the last time I had a blast on the GT because that evening we were headed homewards. We were on the home stretch towards completing 10,000 km in 10 days. I was simply overwhelmed.

Sampat: Hyderabad Bypass–Solapur Road (200 km)
The road changed for the worse after the Hyderabad bypass but nothing could have dampened my spirits on this concluding day of our ride. After all, we were going home! The narrow dual carriageway was chaotic and weather-beaten for most part and I clocked my last miles of the tour with a sense of achievement.

Harket: Solapur Bypass–Solapur-Pune Highway (NH9) (200 km)
I rode twice on the last day, being one of the freshest riders of the lot, which made sense considering how exhausting this ride was. The first bit of the highway past Solapur was crowded, and quite dour thanks to a sudden downpour.

Piyush: Solapur–Pune Road (80 km)
I was supposed to ride for the last 150 km, but I couldn’t maintain the pace in the dark. I was going blind like a bat because of the oncoming headlights since my contact lenses were amplifying their glare. So after struggling for 80 km, we swapped riders again but for the last time.

Harket: Solapur–Pune Highway (NH9) (130 km)
My second stint of the day was less dour, especially considering that it goes past Naldurg Fort. Sadly, we couldn’t explore, because, as Daughtry crooned, “I’m goin’ home, back to the place where I belong.” 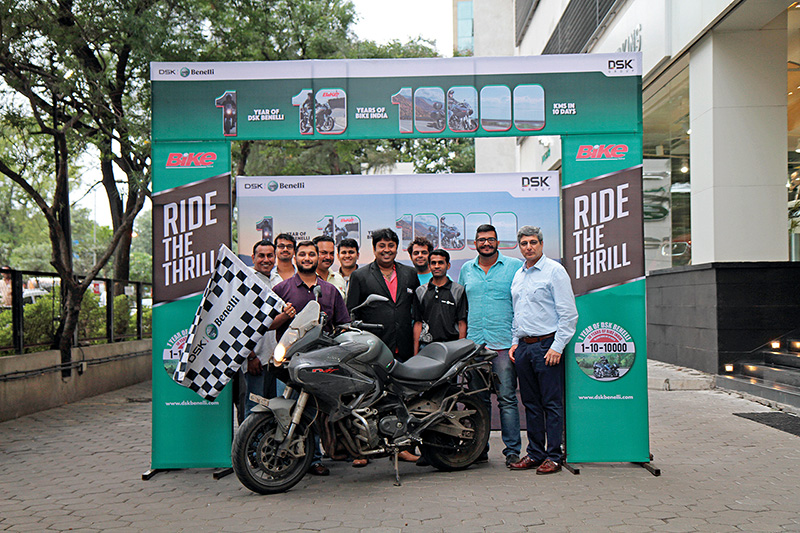