We are in Goa for Yamaha’s big event and you probably know already that they’re going to launch a male-centric scooter called the Ray-Z later today. The Ray-Z is just a stickering job over the Ray, which is aimed at the fairer sex, and there are no engine or chassis upgrades apart from an aerodynamic visor and new rear grab rail. There’s also a carbon-fibre pattern on the meter console and seats, and the wheels are completely done up in black.

The other launch is a new variant of Yamaha’s SZ 150cc execommuter motorcycle, called the Yamaha SZ-RR. Essentially another stickering job over the original SZ, the Yamaha SZ-RR gets embossed decals, and the same paint schemes as before. The instrument cluster is ungraded, as are some suspension internals.

The press conference is graced by the President of Yamaha Japan, Mr. Mitsuru Umemura, who confirmed the launch of the Ray-Z and SZ RR. Yamaha also unveiled a brand new TVC as well as a new tagline, ‘Revs your heart.’ Officials onstage state that Yamaha’s Indian R&D arm  is working on new products, made by Indians, in India, to to suit Indian’s needs. Yamaha’s second site will be ready by next year and the company plans to sell 1 million units by next year, and 2 million by 2016. 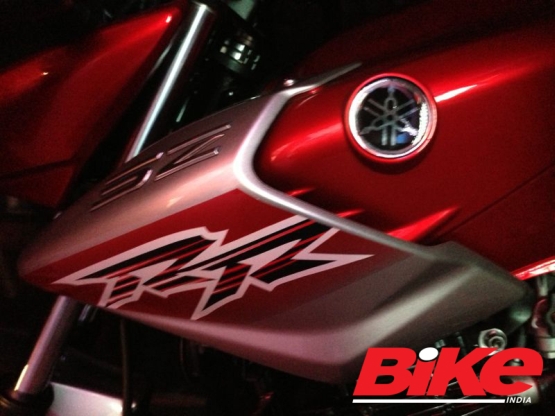