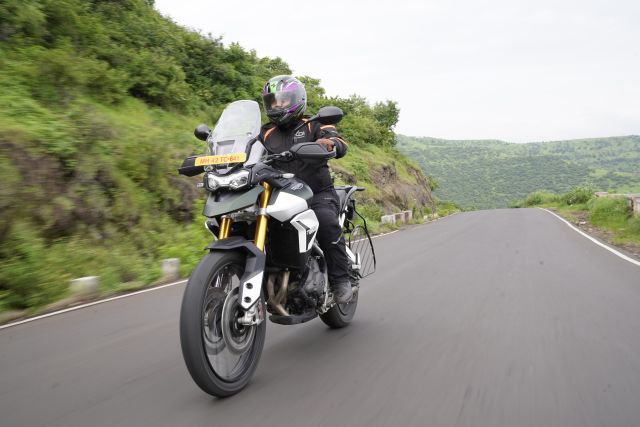 The Triumph Tiger 800 set the ADV ball rolling when it was launched in India back in 2014, but the British brand today faces serious competition in the segment from the likes of Honda, BMW and Ducati. Their response is the all-new Triumph Tiger 900, a bike developed with a focus on real-world rideability with a new frame, motor and a whole lot more. We recently spent some time with the new Triumph Tiger on Indian streets and trails, and here’s what we think.

While the new LED headlights and DRLs are responsible for that frowning countenance up front, the bike is still recognisable as a Triumph Tiger from most other angles. Familiar bits include the industrial-looking exposed steel tubes of the trellis frame, the muscular contours of the fuel tank and that upswept exhaust. However, don’t be fooled, all these components are brand new on the 2020 bike. The tall, golden Showa fork looks extremely attractive and, along with the 21-inch cross-spoked front wheel, gives the Triumph Tiger 900 Rally a rangy, go-anywhere appearance. The frame, now painted white, stands out and hence plays a major part in the new design; while I quite like this look, not everyone at the Bike India office was in agreement on this count. 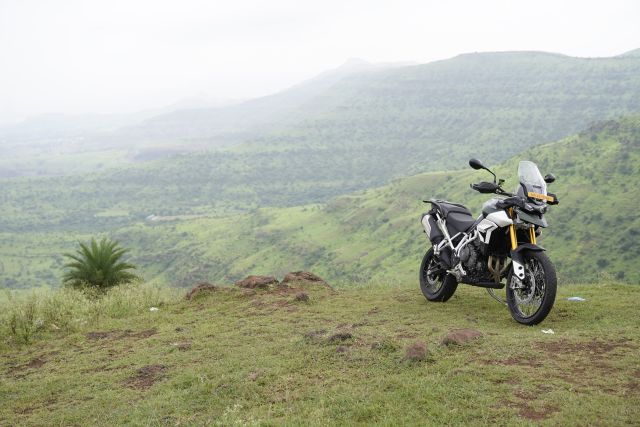 In true Triumph fashion, the bike feels solidly built and closer inspection reveals several top-shelf components that have gone into building a Tiger that can reclaim its place as the most desirable middleweight ADV on sale in India. These include the superbike-spec Brembo Stylema monobloc calipers that handle braking duties, the adjustable Showa long-travel suspension at both ends and the cross-spoked wheels that are compatible with tubeless tyres.

As mentioned earlier, the 2020 Triumph Tiger is an all-new bike from the ground up, however the frame and motor deserve special mentions. 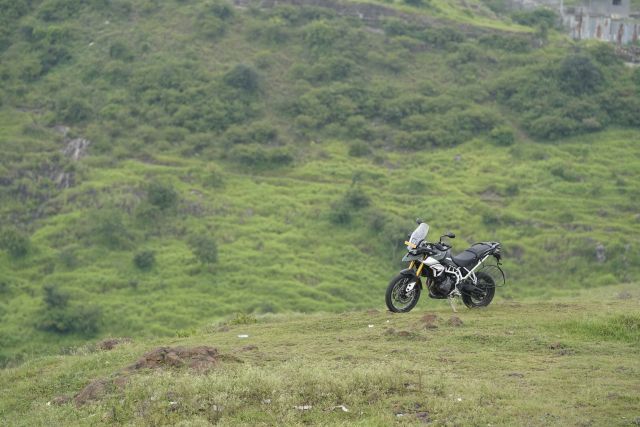 The entire frame on the Tiger 800 was a single unit with even the pillion footpeg mounts welded on; this meant that even minor damage to the rear subframe necessitated a whole new chassis — an expensive and time-consuming proposition. Triumph have overcome this concern by creating a two-part frame, with the rear subframe now bolted on to ease repairs or replacement. That’s not all; the new chassis is also lighter and narrower than before, and the three-cylinder motor is now positioned slightly lower and further forward within the frame to improve weight distribution. Moving the engine forward has necessitated the use of the split radiator to keep it from fouling with the front wheel when the fork is compressed, and Triumph have incorporated a smaller oil sump so as not to compromise ground clearance, since the engine is now positioned 42 mm lower in the frame. The riding position has also been refined, with the handlebar now slightly wider and closer to the rider. 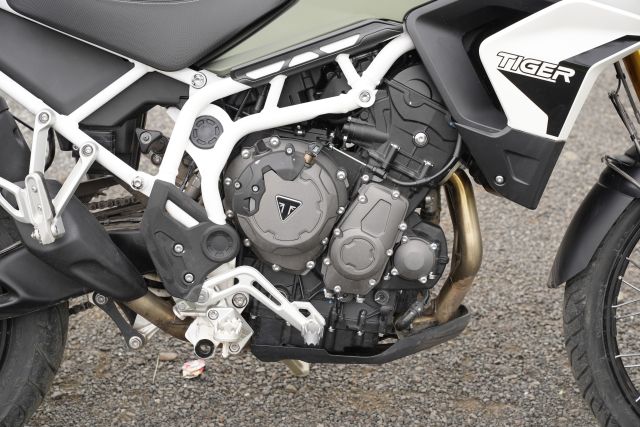 Moving on to the three-cylinder motor, displacement is up from 800 cc to 888 cc, courtesy a 4-mm increase in bore diameter. Peak output is unchanged at 95 hp, but comes about at 8,750 rpm rather than the outgoing bike’s 9,500 rpm, while peak torque is up by 8 Nm to 87 Nm, and also hits earlier at 7,250 rpm, rather than the old bike’s 8,050 rpm; but that’s not the big news. Triumph’s revolutionary T-plane crankshaft gives this motor an irregular firing order to space out the power pulses, thus allowing the rear tyre a moment dig in and regain traction when accelerating on slippery surfaces. The result is a gruff new exhaust note that sounds almost like a V-twin at idle, and a look at the torque curves reveals that the new motor makes more torque across the rev range, with a healthy 75 Nm available from as low as 3,000 rpm. More torque at lower revs translates to better real-world rideability, and that’s the focus of the 2020 Tiger range. 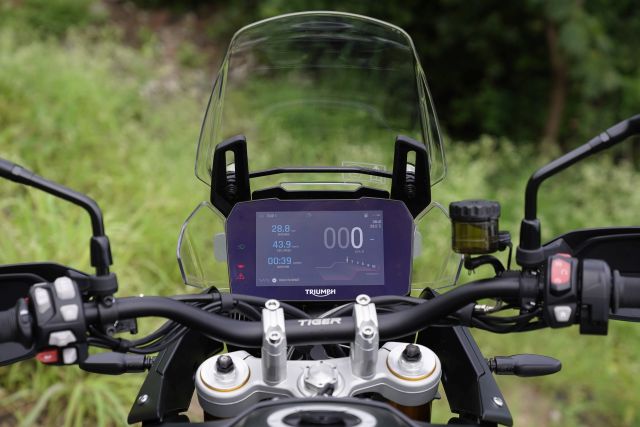 The Triumph Tiger 900 Rally gets a massive 7-inch full-colour TFT screen — the largest I have ever seen on a motorcycle. This is the control centre for the advanced suite of rider aids that are tied in with a six-axis IMU for lean-sensitive ABS and traction control. Included are four riding modes, namely Rain, Road, Sport and Off-road, each with their own parameters for throttle response, ABS and traction control, and you can toggle between them via the designated mode button on the switchgear. 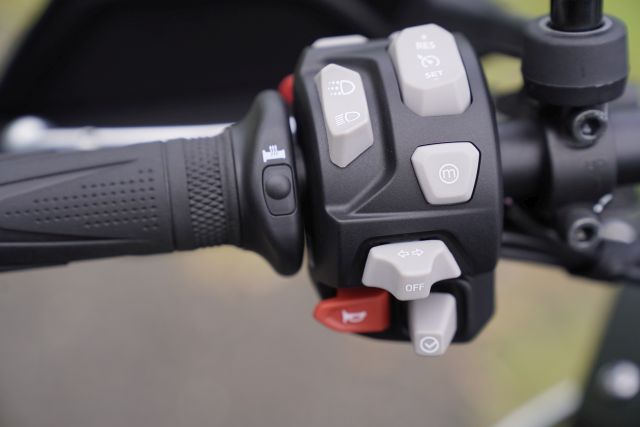 Menus can be navigated via the now-familiar five-way joystick, and the interface is intuitive and easy to learn. The optional connectivity package allows you to access media, calls, messages and navigation from your smartphone, and you can also pair the system to a GoPro action camera and control its features via the switchgear, without having to take your hands off the handlebars. The rider can customise layouts, colours and, while the dash is attractive, I found that the excessive use of animations leave it looking rather cluttered and busy for my taste.

Once on the move, the Tiger 900 Rally feels extremely friendly and manageable, and I immediately notice how much more composed it feels during slow-speed manoeuvres when compared to its predecessor. The top-heavy feel that many riders complained about is completely gone, and repositioning the engine seems to have done wonders by tactfully lowering the centre of gravity. Although this new Tiger weighs almost as much as the outgoing bike, Triumph have managed to engineer it to feel some 20 kilograms lighter that its predecessor at slow speeds. It was only a few minutes before I was completely at ease, comfortably squeezing through gaps and making quick overtakes like I would on a much smaller machine. 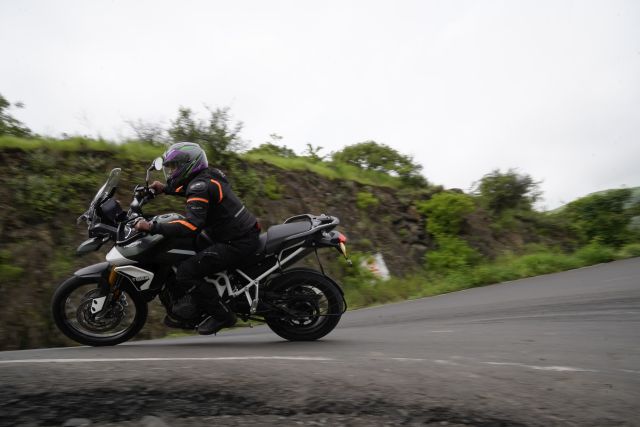 While the punchier low and midrange response was immediately obvious in the city, I was soon out on the highway with the opportunity to stretch the Tiger 900’s legs. This is a bike built to cover long distances and, slotted into sixth gear, the Tiger 900 hits 100 km/h at a relaxed 4,000 rpm. You could cruise all day long at 140 km/h without breaking a sweat and, if the mood for mischief arises, the Tiger 900 will rocket to well over 200 km/h without protest. 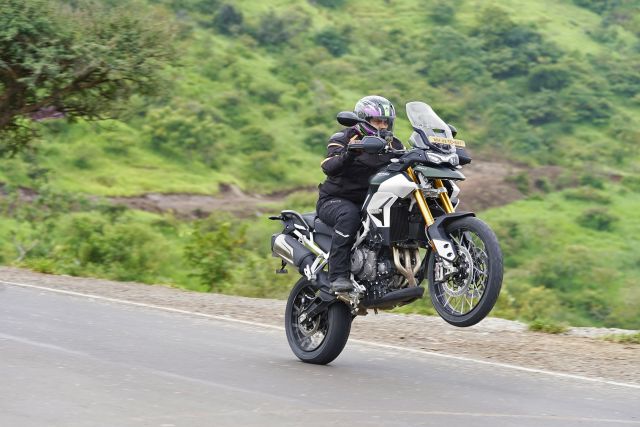 With a whole lot of torque available at low revs, switching the traction control off and grabbing a handful of throttle sends the massive 21-inch front wheel skywards effortlessly, transforming this middleweight adventure bike into an absolute hooligan. The irregular firing order sends a pleasing thrum through the tank and handlebars, quite a contrast to the silky-smooth feel of the 800 motor, although if u insist on revving out each gear like on a sportbike, vibrations do become obvious. But that’s not how this bike was built to be ridden; this bike’s forte is munching miles at a steady pace, unbothered by all kinds of roads and terrain. I was extremely impressed with how the bike attacked a section of tight twisties, and it seems that the massive 21-inch front wheel doesn’t stand in the way of leaning the Tiger all the way over and firing it from apex to apex. 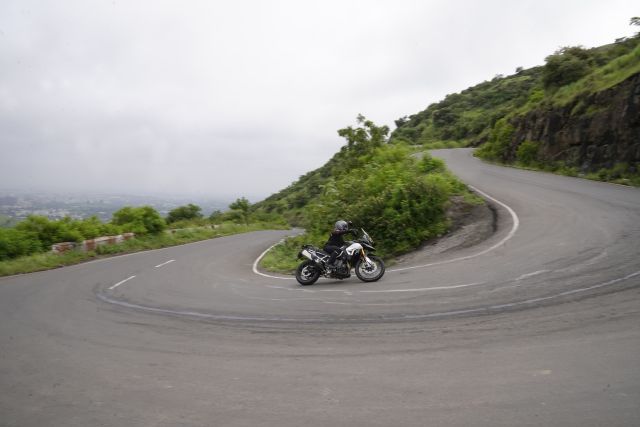 From loose gravel to slush and rocky sections, the Tiger 900 Rally devoured it all without a moment’s thought. The reworked weight distribution has worked wonders for this bike’s poise in the rough stuff, and the riding position is comfortable whether sitting down or standing up on the pegs. 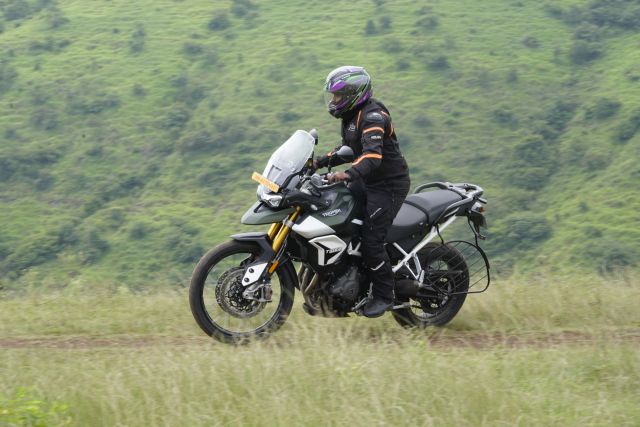 While the outgoing bike felt somewhat clumsy in such conditions, demanding constant corrections and challenging your skills, the new Tiger works with you, ploughing over or through everything in its path, while still seeming perfectly composed and ready for more. The throttle feels directly connected to the rear wheel, and it’s so easy to dial in just the right amount of gas, even at slow speeds; a challenge on the outgoing bike. 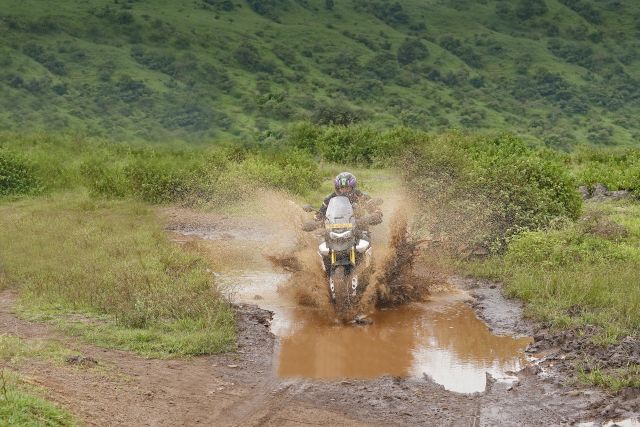 That golden, fully-adjustable Showa USD fork allows for 240 mm of wheel travel, while the Showa monoshock at the rear gets preload and rebound damping adjustability and 230 mm of wheel travel. The suspension easily handled everything I could throw at it, while always giving me a feel for what was happening at ground level, and I lost count of the number of times I felt the front tyre dig in and start to slide, or get knocked off-centre by a boulder, only to right itself with a bit of body English and timely throttle application. The new Triumph Tiger finally feels truly dirt-capable, and is surely going to appeal to our growing community of off-road riders.

Priced at Rs 14.40 lakh (ex-showroom), the Triumph Tiger 900 Rally is positioned between the road-going Tiger 900 GT at Rs 13.80 lakh (ex-showroom) and the fully-loaded Tiger 900 Rally Pro at 15.50 lakh. If your adventures are mostly tarmac-bound and you find the Rally’s 850-mm seat height a bit of stretch, the GT is worth a look, while spending the additional Rs 1.10 lakh for the Tiger 900 Rally Pro will net you two more riding modes, a bi-directional quickshifter, heated seats, LED fog lamps, tyre pressure monitoring, a centre stand and engine and sump protection.

Pick up a copy of our November issue for an even more detailed review of the Triumph Tiger 900 Rally, where we delve deeper into the construction and working of Triumph’s new 888-cc motor and its T-plane crankshaft.