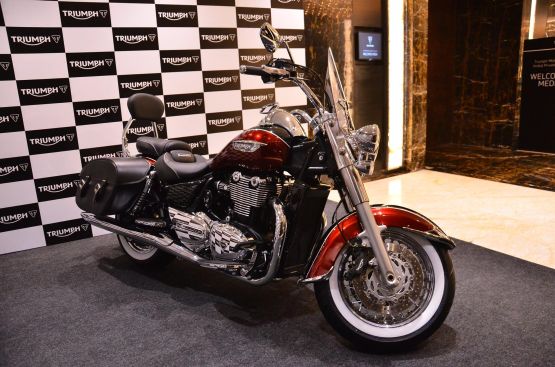 The 1,699 cc parallel twin eight-valve DOHC motor (claimed to be the world’s largest parallel twin motorcycle engine) powering the Thunderbird LT produces 94 PS at 5,400 RPM and a 151 Nm at 3,550 RPM, which is harnessed by a six-speed gearbox. Highlights of the motorcycle include wire-spoke wheels with white walled radial tyres (a world first as per the Company), quick-detach windshield, detachable leather saddlebags, and a dual-layer foam seat with lumbar support.

Speaking on the occasion, Vimal Sumbly, MD, TMIPL, said that the last ten months had been very encouraging for the company, with total sales crossing 835 units and eight functional dealerships in place; two more would be opened in Kolkata and Chandigarh by end-October 2014. The launch of this motorcycle stemmed from their belief that there was a demand for premium cruisers in the market, and this model would serve as their third offering in this space.

The Thunderbird LT is available in two dual-colour options – Caspian Blue/Crystal White and Lava Red/Phantom Black, along with a two-year unlimited mileage warranty as standard.