What makes the 390 Duke an all-new bike is its 373.2-cc, single-cylinder engine. It is a liquid-cooled, fuel-injected unit with four valves and double overhead camshafts. Cam followers are the only components it shares with the 200’s mill while the rest of the engine is specifically made for the 390. It has a forged piston and nikasil coating inside the cylinder block and the bore x stroke configuration is highly oversquare (89 mm x 60 mm). 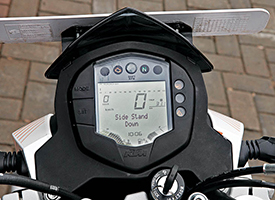 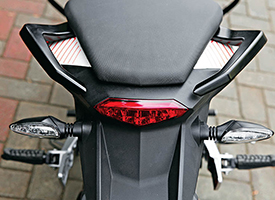 The engine has been electronically restricted at 10,500 RPM. It produces a maximum power of 44.6 PS at 9,500 RPM while the peak torque of 35 Nm is achieved at 7,500 RPM. It is mated to a new six-speed, close-ratio gearbox and has a stubby underbelly exhaust. The 390 Duke’s engine feels busy like the 200’s, but without the strained feeling. It lets out a deep, throaty growl from its exhaust and is louder in comparison.

The 390 Duke has a kerb weight of 150 kg, which gives it a power-to-weight ratio of 297 PS/ton! The bike pulls strongly from the bottom of the rev range and the acceleration gets better and better as the revs climb. We blasted our test bike past the 60 km/h mark from standstill in less than three seconds and reached 100 km/h in less than six! However, the acceleration is linear and the throttle response is predictable, so it won’t be a scary orange maniac for novice riders. We could only take it to a true highest speed of 156 km/h as we ran out of road, but we are sure it can reach the claimed top speed of 162 km/h (true speed) on a longer stretch.

Apart from a tiny wind deflector on the top part of the information panel, the 390 Duke offers no protection from wind blast, and it only gets stronger as the speed increases. One can easily cruise between 120-140 km/h in the sixth gear, but it becomes difficult to maintain speeds higher than that.

The bike is fun to ride in the city as well as it has a very strong mid-range, which helps while tackling traffic. Frequent gear-shifts are not required since the engine is flexible and there is ample surge of torque the moment you twist the throttle. Fuel consumption is in the range of 25-30 km/l approximately when cruising at 100-110 km/h in the top gear, but will drop down if ridden hard. The fuel tank capacity is 11 litres and the range is about 250 km. 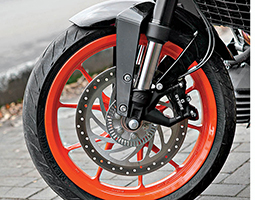 Braking power is derived from a 300-mm hydraulic disc brake with four-piston radially mounted Bybre calliper on the front wheel while the rear wheel has a 230-mm rotor with a single-piston floating calliper. Together, they provide sufficient stopping power and also employ the latest two-channel ABS system by Bosch, which works flawlessly to prevent disc lock-up. ABS is standard equipment and can be switched off by pressing the ‘secret’ area below the ‘Set’ button on the instrument. Keep it pressed until the ABS lights flash to deactivate the system and switch the ignition off and on again to re-activate it.

Suspension system is courtesy WP, a subsidiary of KTM, and includes 43-mm upside down forks up front and a monoshock for the rear wheel. I remember being told during the international launch of the bike in Austria five months ago that the suspension set-up of the Indian bike would be softer than the European spec machine we had ridden in Austria, but I didn’t noticed any significant change. The suspension is absorbent on small bumps, but makes the bike shudder when ridden over bad roads.

The stiff set-up of the bike is helpful while riding around bends, though, as it remains rock steady when leaned over and follows steering inputs obediently. The wide and grippy Metzeler Sportec M5 tubeless tyres (110 mm front, 150 mm rear) have an equal share in making the 390 a great handling motorcycle that it is and are provided as standard equipment.

To sum up, the 390 Duke is a great motorcycle and a considerable upgrade over the 200 Duke even though it looks similar. It is fun to ride, easy to manoeuvre and almost as fast as the Kawasaki Ninja 300. However, with the surprisingly small price-tag of Rs 1.98 lakh (OTR, Pune), it can be yours in half the money. So what are you waiting for?

Bike India Team – who has written 975 posts on Bike India.