After Suzuki unveiled bits and parts of their 2015 line-up at the INTERMOT, and EICMA, the UK’s Motorcycle Live show is now the latest venue for an unveil, albeit of special additions rather than completely new bikes.
For starters, the legendary GSX-R line-up will be made available in Suzuki’s unique, MotoGP livery in the form of the GSX-R MotoGP replica range. So the GSX-R600, GSX-R750, and GSX-R1000 will all come with that striking blue,white and yellow paint job from the MotoGP GSX-RR – piloted by Aleix Espargaró and Maverick Viñales for the upcoming 2015 season. The bikes will also receive that characteristic double-bubble race screen, along with carbon tip Yoshimura exhausts (painted black), and a whole bunch of other Yoshimura Works parts as well. These include an oil-filler plug, bar-end weights, top yoke nut, engine case savers, timing plug, and rear paddock stand bobbins.

Next up we have the Hayabusa Z. This hyperbike now gets a little more streamlined with another Yoshimura exhaust set, this one features Hepta Force titanium silencers with a carbon tip. The Hayabusa Z also gets a spanking new two-tone blue and silver paint job to boot.

Finally, the V-Strom adventure bike gets a re-jig. The V-Strom Desert edition, as it is called, comes with a ‘desert khaki’ paint scheme (military green and beige in layman’s terms), and a few improved odds and ends like the Garmin 590 Sat-Nav kit, new engine bars, LED fog lamps, a centre stand, knuckle guards, lower cowling, panniers, and a feature that would be quite redundant in the scorching desert in the day-time – heated grips. 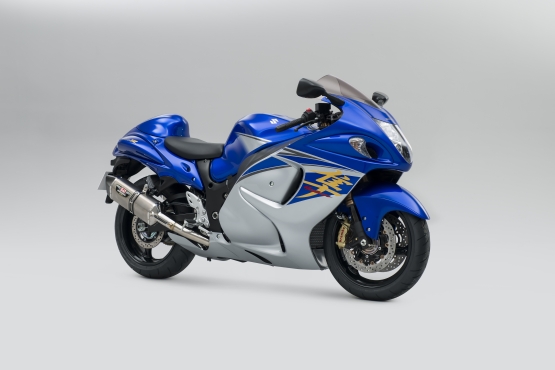