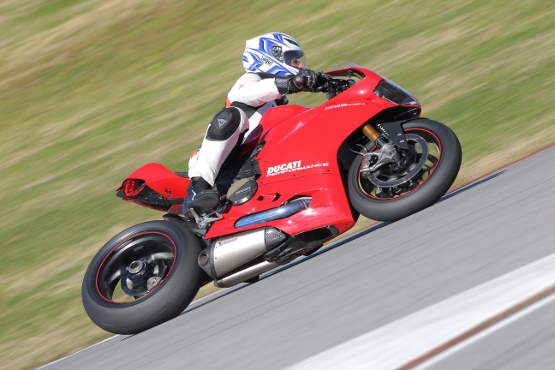 The 1299 S retains the compact aluminium monocoque structure and uses the Superquadro engine as part of the frame. It is mounted directly on the cylinder-heads and the front part incorporates the steering-head bearings. As well as being a chassis, the monocoque also acts as the air-box. The steering-head angle has been reduced from the 1199’s 24.5 degrees to 24 degrees of the 899 Panigale. The trail has also come down from 100 mm to 96 mm. The single-sided swing-arm now pivots four millimetres lower at the pivot point. The wheelbase of the 1299 S is 1,437 mm while the distribution of weight is 52 per cent at the front and 48 per cent at the rear for a rider of average build.

When you have 205 PS of power on tap and only 166 kg to haul, you need to have the best possible suspension, brakes and tyres to put the power down on the tarmac and stop this missile at the same time. The suspension on the 1299 Panigale S is the Öhlins Smart EC system, with event-based control system for the suspension. This system, thanks to the use of stepper motors and taking into account the signals measured and/or elaborated by the bike’s other ECUs, modifies the set-up of the suspension during use in order to improve cornering grip, stability, braking, corner entry and handling. The system, developed in collaboration with Öhlins, uses a NIX-30 fork with TIN treatment on the fork tubes, a TTX shock-absorber and a steering damper regulating each one independently.

The whole 1299 Panigale/S and R range is equipped with monobloc Brembo M50 which are designed to be light and compact at the same time. The callipers are forged from a single block of alloy and provide enhanced rigidity and resistance to deformation during the most extreme braking conditions. The double monobloc Brembo callipers have four 30-mm pistons griping 330-mm disc rotors. The rigid construction not only provides fantastic braking but also excellent control and feedback. The whole 1299 Panigale range is equipped with the new lightweight Bosch 9.1MP ECU cornering ABS system.

The 1299 S is loaded with electronics to the gills and sets a new benchmark for electronics in motorcycles. The highly advanced electronic kit is supported by an Inertial Measurement Unit (IMU) which measures acceleration in relation to three axes and calculates the bike’s angle of roll and pitch. The IMU has made it possible to increase the performance of the electronic kit, introducing Cornering ABS, Ducati Wheelie Control (DWC) and, on the S version, Öhlins Smart EC, an event-based control system of the suspension. For the first time, the Ducati Quick Shift (DQS) functions also for down-shifts. Furthermore, the 1299 is equipped with ride-by-wire (RBW) system, Ducati DATA Analyser (DDA+) and Ducati Riding Modes, which interact with Ducati Traction Control (DTC), Ducati Wheelie Control (DWC), Ducati Quick Shift (DQS), Cornering ABS, and Engine Brake Control (EBC) and, on the S version, you can adjust DTC, DWC and EBC system on the go. 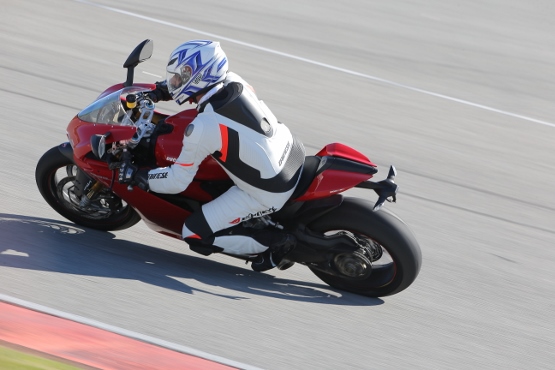