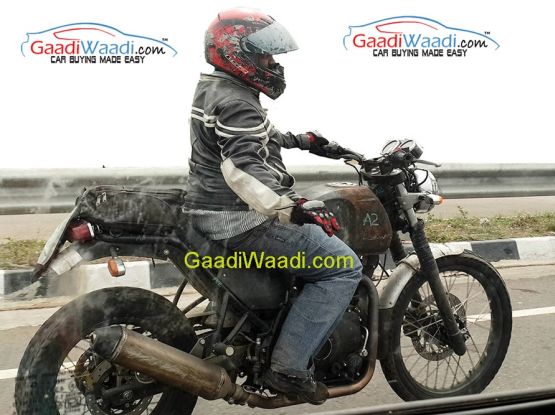 Royal Enfield (RE) have been working hard at spreading its wings in the country and on the global platform as well. It has been quite some time now since we first got a glimpse of Royal Enfield’s adventure tourer christened as the – RE Himalayan. Now once again the Himalayan has been spotted testing in Chennai by our friends at GaadiWaadi.com.

As you can see in the images the Himalayan now sports a newly designed exhaust, the design of the tailamp is similar to the new Thunderbird and one can also get a glimpse of the instrument cluster.

Expected to be either an off-roader or and adventure tourer, mechanically, the Himalayan is rumoured to be powered by a new 410-cc single-cylinder engine, which is expected to produce a higher power output than the Continental GT.

Since the bike has been spied testing again, we can assume that the Himalayan’s launch is on the horizon, and we’ll see more official images, and receive further details soon, so watch this space.