The Royal Enfield 650 Cruiser has been spotted testing again, this time without camouflage which shed more light on what it has to offer. 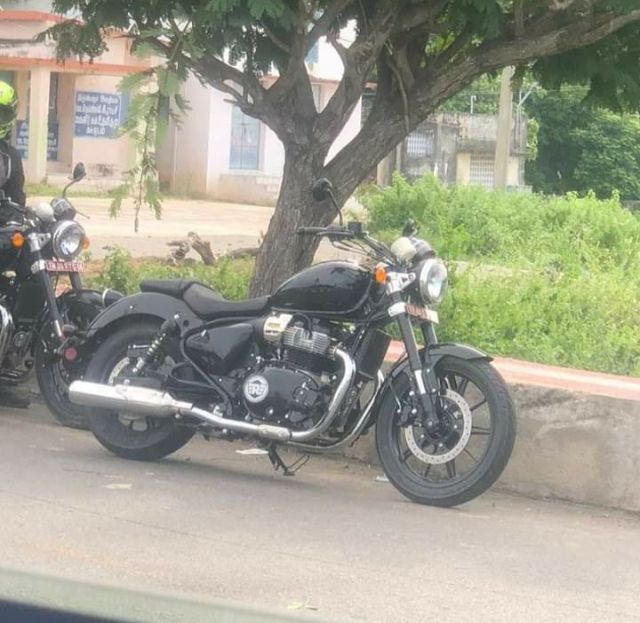 Currently, the 650-cc motorcycle range from Royal Enfield consists of the Interceptor 650 and the Continental GT650. After the manufacturers revealed the KX Concept model at the EICMA last year, there have been talks about Royal Enfield building a new cruiser which will use the same 650-cc engine. And this looks like the closer to production version of the Royal Enfield 650 cruiser.

As we can see, the motorcycle has been designed to attract touring enthusiasts with its bobber styling. The handlebars are wide and raised, the seat positions a rider low with the footpegs set all the way in the front and the exhaust pipes are now routed straight. With this new spy shot, we can confirm that the motorcycle is ready to be launched in India, but would take until next year considering that the manufacturers are currently focusing on their 350-cc platform.

The bike will make use of the same 648-cc, parallel-twin motor which puts out 47 hp and 52 Nm of torque, mated to a six-speed gearbox. There will be slightly tweaked gear ratios to better suit the nature of the motorcycle. The suspension setup comprises a USD fork at the front, twin-shock absorbers at the rear and the braking setup is the same as seen on the Interceptor and the Continental GT – a 320-mm disc at the front and a 240-mm disc at the rear.

What will make this cruiser unique is the use of alloy wheels compared to the spoked wheels used on the current 650 twins. This means that the cruiser will sport a set of new tubeless tyres as standard. There is still a while before the motorcycle is launched but we can expect it to be priced at a premium of over 30,000 over the Interceptor which will make it approximately Rs 3 lakh (ex-showroom). We can’t wait to get our hands on this one.