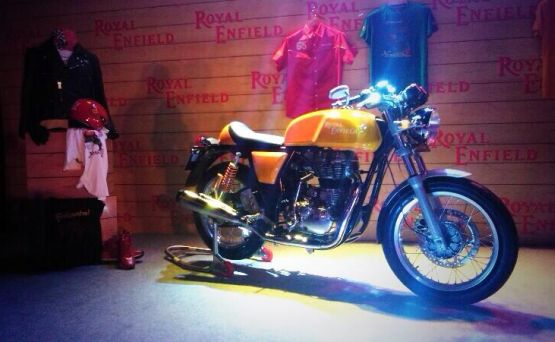 Royal Enfield have officially added a café racer to the line-up, finally! Does the Continental GT have what it takes to reawaken the speed demons within? We’re the first in India to ride it and find out!Royal Enfield makes motorcycles you either love or hate. Even those who love them, hate so many things about them, but love them nonetheless. It is in their several characteristics which are so unique and which set them apart from other motorcycles, that the passion and desire to own one breeds in the souls of young and old alike. When Royal Enfield launched the original Continental GT back in the 1960s; retro styling aside, it was the fastest machine they had in their portfolio at the time. So, when a motorcycle maker, now 120 years old, decides to infuse a 60 year-old design with modern technology and improved build quality, you just know it will be something special.

The hardware on the bike is pretty much all new and Royal Enfield haven’t skimped out on the goods. The first thing you notice is the long fuel tank which retains the 13.5 litre capacity, which reinforces the café racer styling. The tubular frame has been developed with UK’s Harris Performance with the suspension setup featuring 41mm telescopic forks up front from Gabriel and twin gas-charged shock absorbers at the rear by Paioli. The brakes are from Brembo, with a 300-mm front disc bit by a two-piston calliper and a 240-mm rear disc with a single piston calliper. The old-school wire-spoke 18” rims are wrapped in Pirelli Sport Demons – 100/90 front and 130/70 rear – the widest set of rubber offered as stock by the company so far. You also get clip-on handlebars with bar-end mirrors, an integrated lock for the handlebars and the ignition, a twin-pod instrument cluster, garnished with chrome rings, with an analogue speedometer and tachometer and a tiny digital display. The seat too is trademark Café Racer and makes you crouch just a bit to grab the bars. Then, there’s the engine.

The UCE in the Continental GT is the biggest and most powerful motor ever offered in their India line-up. The 535cc near-square single puts out 29.1 PS at 5,100 revs, with a peak torque of 44 Nm coming in from 4,000 rpm. The five-speed transmission drives the chain on the right side, sending all the power to the fat rear wheel. There’s loads of bottom-end torque and the response is good too. How can I forget, there’s the inevitable hardcore Bullet exhaust note, dug-dugging away when you slow down to an idle after a blast. As far as quality and refinement are concerned, this is the best one yet. It rides unlike any Enfield I’ve had the pleasure of getting astride on till date, and the combination of a whole new engine and completely unconventional riding position was enough to take the excitement up several notches.

Coming to the pricing, the Continental GT has been launched at Rs 2.05 lakh OTR, Delhi and Rs 2.14 lakh OTR Mumbai. Quite competitive, considering the amount of kit on the bike. For all the details and the complete road test of the Royal Enfield Continental GT, pick up a copy of our December 2013 issue on stands now! 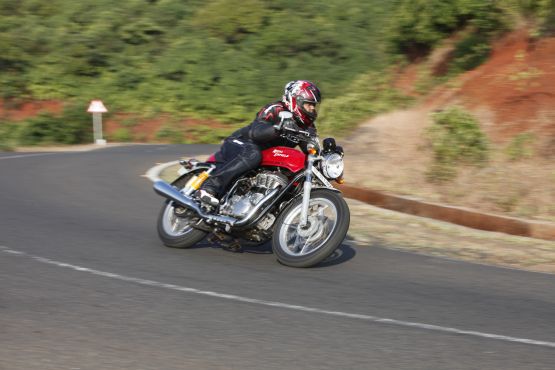