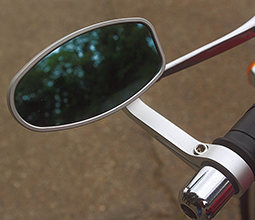 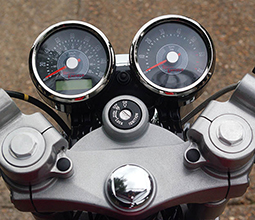 The Continental GT is going to be the new flagship of Royal Enfield’s line-up and they wanted it to have the biggest engine. It is based on the 500-cc, fuel-injected, air-cooled, single-cylinder engine powering some of their other bikes, but has a bigger displacement due to a three-mm bigger bore diameter. That has resulted in a few other changes such as a bigger diameter piston, piston rings, bigger intake valves and air-filter and, of course, a different ECU mapping. Royal Enfield engineers have apparently also reduced the engine’s inertia by using a lighter flywheel. The engine has a displacement of 535 cc and is mated to a slick five-speed gearbox. The maximum power output is 29.1 PS at 5,100 RPM while the peak torque of 44 Nm is available at 4,000 RPM.

The Continental GT, as explained by Royal Enfield’s MD and CEO Siddhartha Lal, is a bike that allows the rider to be superior. In other words, it is not a very fast motorcycle.

The bike has an indicated top speed of 150 km/h in the fifth gear, but needs a long stretch of road to attain that. However, one can easily cruise at 120 km/h in the fourth or fifth gears.

It has the characteristic Royal Enfield thump, but it sounds noticeably different from the other bikes and the exhaust note has a sputtering endnote. The engine has a good low and mid-range, but feels a bit dull at the top of the rev-range. Acceleration is gentle and the engine is flexible, so the motorcycle is easy to ride and has smooth gear-shifts.

The tank capacity of the GT is 13.5 litres and, at the end of our 130 km/h ride, it was left with about half a tank of fuel after starting from full, which gives a fuel efficiency figure of about 18 km/l. However, wait for our test figures in India to find out the actual average.

The 800-mm seat height of the bike should not be a problem for riders in India and for those who want a longer seat, Royal Enfield propose to sell an optional two-rider seat in India.

The Continental GT is a Royal Enfield, so it does have high-frequency body vibrations, but they aren’t very severe and though the seat is narrow and firm, we found it to be quite comfortable none the less.

The bike feels extremely stiff and remains rock-steady even at top speed as well as when thrown into corners but the stiffness also makes for a very bouncy ride on bumpy roads, so we hope that the India-spec bike will come equipped with a softer suspension set-up. The brakes are really strong and provide optimum stopping power with just the right feel.

Due to the long tank of the bike, the saddle has been pushed back a little so the rider needs to lean forward in order to reach the handlebars. The clip-ons and rear-set pegs further add to a sporty riding posture, but it is not very extreme, so one can ride the bike for long hours comfortably. The long seat allows the rider to move back in order to duck down during high-speed runs and, unlike the old bike, the clip-ons on the GT are placed higher so that the palms aren’t loaded with the rider’s weight and it also helps while manoeuvring through traffic.

The Continental GT is an important motorcycle for Royal Enfield as it represents the next step in the marque’s evolution. The bike was first showcased at the 2010 Auto Expo in India and has been under development for all these years. The company is very ambitious about it as it aims to improve its global footprint by launching the GT in most of the major motorcycle markets in the world. The GT is manufactured at Royal Enfield’s new plant at Oragadam, Chennai, and they are focusing on international shipments before launching it in India. The on-road price of the bike in the UK is £5,200 and deliveries start this month. The India launch is expected in the last two months of the current year and the expected price is in the range of Rs 2-2.25 lakh.

Royal Enfield have also launched a special range of Continental GT accessories and rider gear, which will be sold through their dealerships. The Continental GT is certainly the best motorcycle Royal Enfield have made so far and is worth waiting for. However, don’t expect a performance-oriented motorcycle. It is a cult classic that makes a statement and represents a lifestyle.

The new Royal Enfield Continental GT is a reincarnation of the original bike in a modern avatar, but it has retained its charm and it looks authentic