Grand Prix Racing legend Randy Mamola will compete on a custom drag-racing bike based on an Indian Scout Bobber from the Workhorse Speedshop stable. 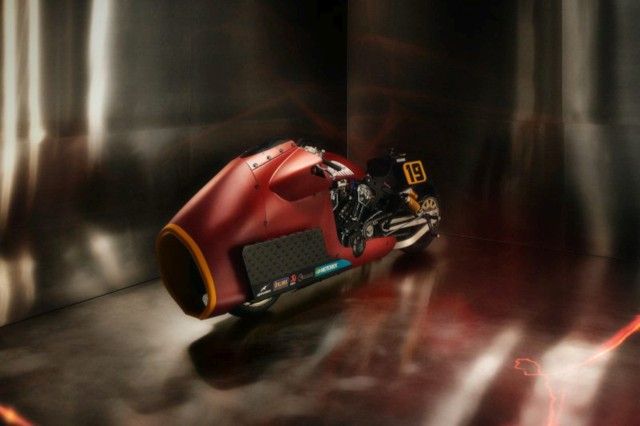 Randy Mamola, the Grand Prix racing legend, is going to race on a purpose-built custom Indian 1200 Scout Bobber-based drag-racer in the upcoming Sultans of Sprint Championship “Factory Class” 19 series that will be hosted in France and Germany. The build specs require that all motorcycles in this category have a four-stroke engine and offer a power-to-weight ratio of no more than 0.66 PS/kilogram or 660 PS/tonne in normal speak.

The bike has been named “Appaloosa” after a breed of American horse, except this is a breed that was fed and groomed by Brice Hennebert of Workhorse Speedshop to race in this hooligan-styled drag race, in the wake of the Scout’s centenary celebration. The first Indian Scout was produced in the year 1919 and, hence, the bike will compete with the number 19 stamped upon it.

The bike’s creator Brice Hennebert said, “I wanted a name that could link Workhorse, Indian motorcycle and speed. As soon as I discovered that the American horse breed, Appaloosa, was one of the world’s fastest horses, I knew I had the name for an American sprint bike built by Workhorse.

The bike has undergone more than 700 hours of designing and fabricating to be race-ready. To build this drag-racer, a regular Indian Scout bike was picked and stripped down to its bones. Since the bike is going to compete in a drag-racing series, high-quality components from Akrapovič, Öhlins and many other big names were used. In order to make the bike more streamlined, a massive dustbin front fairing was built and fixed. A narrower fuel tank was built from the original parts, reducing the tank’s capacity from 12.5 litres to a mere 2.5 litres; just enough to finish a drag race. The engine was retuned with the help of racing components such as an Akrapovič exhaust, a racing ECU, Power Commander, nitrous oxide injection, a direct intake and fresh oil, to give an extra power of 130 PS. To keep up with this extra power, Brice had to swap the belt drive with high quality chain. A quick-shifter has also been added for the rider to go through the gears quicker and enable clock a faster time. Berringer’s 4D brake system has been installed with dual 230-mm discs with high-performance calipers to give this crazy-looking mean-machine adequate stopping power.

Due to all this performance enhancements, the bike had to undergo structural modifications including the addition of a new subframe for higher rigidity and to keep up with the extreme structural forces acting on the bike under hard acceleration and braking. Moreover, to counter the wheelie effect during the quarter-mile acceleration, clip-on bars and rear-set foot controls were added which will make the rider lean on more towards the front wheel, shifting more weight to the front. Further additions such as an extended swingarm, coupled with a fully-adjustable Öhlins STX 36 piggyback unit at the rear and Retro 43 forks at the front, along with a steering damper, give the bike better balance and stability during the sprint. The controls on the Appaloosa are also minimalistic and drag-styled, staying in-sync with the purpose of this bike.

On finishing the bike, Hennebert said, “After putting so much into this build, I’m excited to see the reaction to it and I can’t wait to see Randy blast it down the racetrack.”

To this Mamola replied, “I’ve always been a big fan of Indian Motorcycle and I’m really looking forward to racing this amazing creation.”

He further added, “I’ve always been a big fan of Indian Motorcycle and I’m really looking forward to racing this amazing creation. It’s great to be part of this project, especially during the Scout’s 100th anniversary. With the Sultans of Sprint being such a unique series, it’s going to be a lot of fun soaking up the atmosphere, meeting the crowds and putting on a show for them.

The bike is sure to grab eyeballs and we are already hyped to see the racing legend ride this beast. For those enthusiasts who are going to miss out on this spectacle, Indian have arranged for the Appaloosa to be put on display in the UK at the Bike Shed between May 24 and 26.