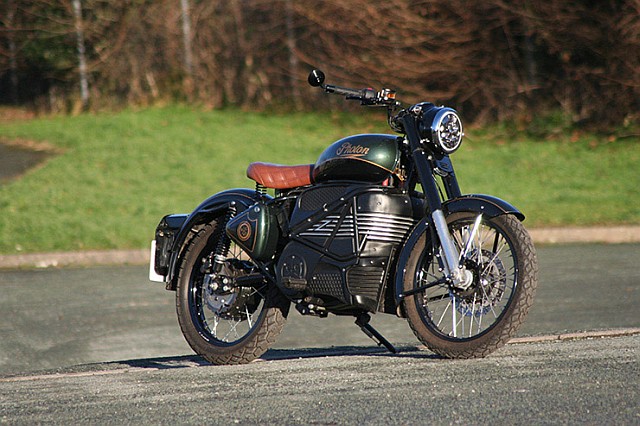 At first glance, the Photon is slightly odd-shaped with the large electric powertrain in place of the engine, but it does not stick that far out and has neatly integrated the battery pack.

Four lithium-ion batteries have been used with a capacity of 2.5 kWh each, which makes for a total.energy density of 10 kWh. The company claims it takes 90 minutes to a full charge and delivers a range of around 130 km. Mounted at the rear is the 12-kW (16.3 hp) motor, but with instant torque at its disposal. The Photon is said to have a top speed of around 110 km/h.

This custom Royal Enfield Photon gets British Racing Green paintwork and contrasting gold pinstripes on the tank. The seat is a brown seat that goes well with the rest of the bike. Most electric vehicles are designed with a futuristic appeal but the Photon has basically been designed keeping Royal Enfield heritage in mind. It will only be unique to see a Royal Enfield motorcycle passing by without the loud thump coming from the engine. Other parts on the motorcycle such as the wheels, the suspension and the brakes are identical to those on the regular Royal Enfield Bullet.

While it may be an environment-friendly motorcycle it does not come cheap and since it is being built by a small company there will be a long waiting list. In the UK it is priced at £20,000 which is approximately 19.2 lakh in Indian rupees.

Azaman Chothia – who has written 217 posts on Bike India.