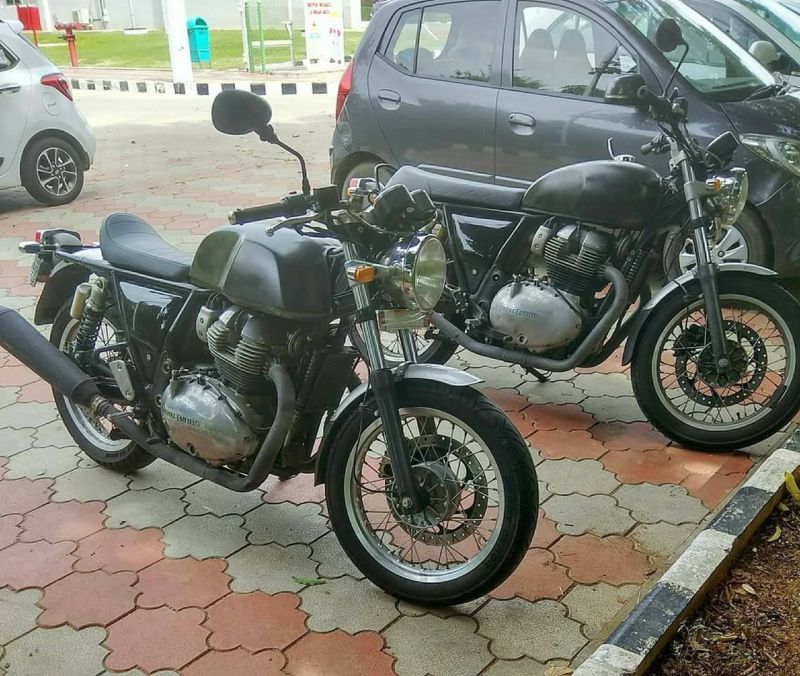 After being spotted numerous times, we found an interesting image (on Behind the Handlebar’s Facebook page) of the bigger Royal Enfield; spotted with what seems to be another variant. Seems like the big engine isn’t exclusive for the café racer, considering the fact that both motorcycles look like they belong to different categories.

Let’s talk about the engine first. From earlier pictures it was quite clear that the engine is an air-cooled parallel-twin with an oil-cooler. Although Royal Enfield haven’t confirmed it yet, word on the street is that it will be a 750-cc mill.

At first glance, the new variant seems to be a reincarnation of Enfield models of yore but in a more contemporary avatar, good enough to challenge the likes of the Kawasaki W800 or the Triumph Bonneville range. Along with the engine, looks like both the new variant and the café racer have a double-downtube cradle frame. Other common features include the suspension, brakes and lights. The fuel tank on this bike looks like the one on the Classic range hinting at a retro-cruiser kind of character (Bullet 750, anyone?) while the wider single-piece handlebar and fore-set foot-pegs further add to the claim.

The fuel tank, clip-on handlebars and twin-pod instrument cluster make the café racer-inspired variant look almost identical to the Continental GT. The suspension set-up consists of a telescopic fork at the front, with gas-damped twin shock-absorbers at the rear. It is hard to say if the rear shock-absorbers are from Italy this time around. However, the Pirelli Sport Demon tyres clearly are, visibly hugging the wire-spoked wheels. This motorcycle will come equipped with ABS, with the Indian model at least receiving it as an option this time round.

Since these test-mules are getting bolder by the day, we expect to hear news of a launch from Royal Enfield soon. Stay tuned.