I believe each of us has had at least one moment in our lives when we looked at something with a sincere yearning; a desire that would take over us in the days that followed. One of my first moments like that was when I set my eyes on the Yamaha YZF-R15 Version 2.0. Of course, bigger and powerful motorcycles adorned my bedroom wall but my heart went out to the R15 and it has stayed there since. 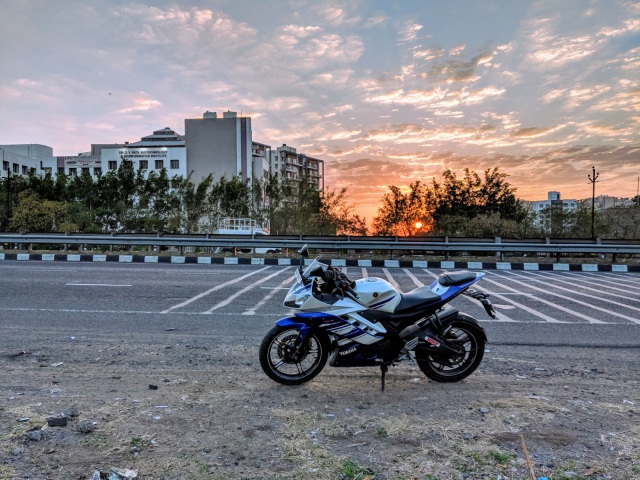 As a college student with a driving licence, “My Own R15” was the title of most of the dreams I had while I slept and I woke up to all of them facing the same disappointment of getting ready in time to catch the bus. When my father shot down the idea of buying me one because it would become the biggest withdrawal from our modest bank account, I did not persist. I did not give up either.

With whatever time I had left after a regular day of college-going, I began to work. Well after owls retired and even after the cock crowed, through weekends, holidays, and the like. Over time, my savings account swelled like a well-fed goat but a new problem surfaced. It appeared I would have to kill my goat before Eid. The R15 was launched in a special edition and it would be the last of its kind to don the gold Yamaha badge and I had to have it. Problem was, stocks were running out, I couldn’t get a loan in my name, and I had only two-thirds of the sticker price ready.

Right. I approached my father once more with the object of securing a loan for the missing third. This time, he agreed. I booked what may have been the last Racing Blue R15 in the city and, before the final payment, my father played his own sly hand. He said, ‘I know what you have done for this motorcycle. So, I am going to pay two-thirds, just bring a third to the table.’

The R15 was everything I expected it to be. It clearly bore elements of the design that made its larger siblings — the YZF-R6 and the YZF-R1 — so irresistible. Its Deltabox frame and the aluminium swing-arm made for incredible handling by offering an almost-telepathic connection. The engine had all of Yamaha’s qualities: smooth, refined, and powerful. Plus, who would not feel like their racing idol, Valentino Rossi, whenever they rode a Yamaha? Today, after five years, I still cannot recall a single moment of regret while being astride the R15. It was a crucial part of memorable road trips and experiences that would have otherwise remained impossible.

I missed my R15 a lot when I moved to Pune to work for Bike India. So, I got on a plane one day and rode it all the way from Chennai to Pune. Why? Because my south Indian self felt like an alien in Pune and my TN-registered motorcycle was a perfect company. Today, even as I save up to buy a bigger motorcycle, selling the R15 is not an option.