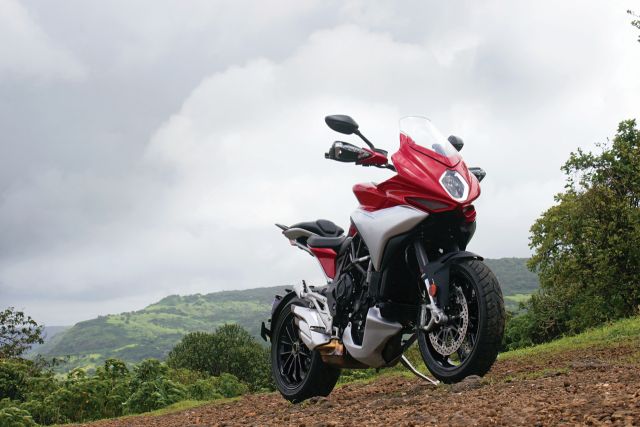 The sports tourer is a motorcycle made for munching miles upon miles, yet attempting to bring out your inner MotoGP racer when the twisties arrive. Today, you have a host of such motorcycles and in fairly varied avatars too. However, if you want to fit in with those folk on the streets of Monte Carlo or Saint-Tropez, you have to go Italian. Not just any Italian either, you need ‘fascino‘, which is Italian for glamorous or in the motorcycle world known as Meccanica Verghera (MV) Agusta.

MV Agusta have launched their tourer model in India recently and given it a name that rolls off the tongue followed by a smug smile: the MV Agusta Turismo Veloce 800. Fancy names apart, does the Turismo Veloce live up to the mile-munching, canyon-carving tag slapped on to the segment? Well, yes it does. Having said that, do not be deceived by the initial look of the bike as this is not an adventure tourer. No off-road ability here, and MV Agusta, too, state the same. What the Turismo Veloce is truly meant for is blitzing the curvy roads and keeping you comfortable while getting to Alpine heaven, even if said activity is on the daily. The motorcycle is a road-only sports bike on stilts and, in all probability, the most usable MV Agusta to date.

When it comes to the visual appeal of the Turismo Veloce, the bike follows the same design language we are accustomed to with road-biased adventure tourers. Apart from that, I plead the Fifth, as they say in the US. From some angles, the bike looks quite unflattering, but hold that stare a little longer and you will soon fall in love. MVs are often sculptures fit for any museum and even the company’s website itself insinuates this point as you will see “MV Agusta Motorcycle Art since 1945” plastered all over. 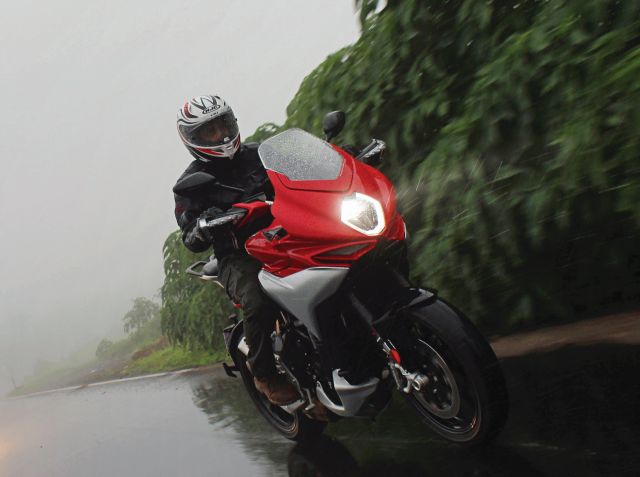 However, if speaking of the basics, you will see the same headlamp shape seen on the faired Agusta F3 and F4 series, the small diamond-shaped unit is unmistakably MV and sits in a sort of a half-fairing with a height-adjustable windscreen. Sitting neatly behind the screen is a rectangular dashboard with enough information on the home screen to rival Google. The dash is quite cluttered, but the clutter is visible even in direct sunlight. The handlebars are wide and feature knuckle-guards that house the LED turn-signal. However, the switchgear could have been a bit better; even though it worked just fine, it just did not feel as premium as one would expect. In addition, the Turismo Veloce has two charging ports near the rider and pillion foot-pegs and two USB ports near the dash: handy features when touring.

The sculpted 21-litre tank is the biggest you will find in the MV range today. However, it does look surprisingly compact when sitting in the saddle. The seat is a split unit with the rider’s throne being wide but tapering quite narrowly towards the tank, which is a good thing as this is a tall motorcycle and getting your feet down with a wider seat would be quite a task if you weren’t well above average height. The rear seat sees you get the “floating-seat” unit that we have seen on the Brutale and is more comfortable than it looks. The tail-tidy ends with a beautifully crafted brake light which in itself is a piece of art; quintessential MV Agusta. However, due to this artistic brilliance, MV Agusta have decided, for some odd reason, to attach the rear indicators to a low tyre-hugger; unexplainable but quintessential Italian. The whole bike looks quite meaty at the front half with the rear being devoid of bulk, albeit with bucket loads of drama. 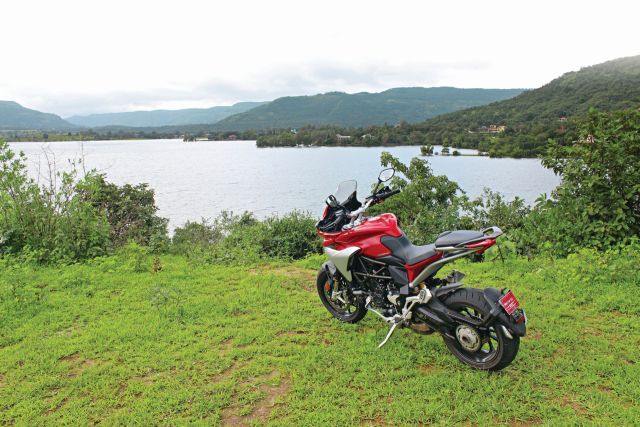 The true pièce de résistance of the Turismo Veloce is not the aforesaid artwork, though, that title belongs to the lively heartbeat of the said beast and its workings. The Turismo Veloce has the same 798-cc three-cylinder engine found in a number of models in MV’s catalogue, which includes the naked Brutale, Dragster, and the faired F3 sports bike. Power figures are similar to the Brutale’s at 110 hp and 80 Nm, but, unlike the Brutale, the engine management and overall calibration seem to be reined in, making the Turismo Veloce a lot more friendly. No bonkers acceleration; instead you get a linear controlled surge which makes sense as MV Agusta want this to be a day-to-day motorcycle.

We found this to be the case when riding in touring and rain mode. Having said that, put the bike into sport mode and the beast we know MVs to be rears its head. In addition, you also have a custom option for setting up the bike up however you deem fit.

Transmission duties on the Turismo Veloce are carried out by a six-speed gearbox fitted with a superbly smooth up and down quick-shifter and an auto-blipper. Gear changes with the quick-shifter were seamless, something that could not be said when using the hydraulic clutch on the Turismo Veloce. It seemed like the motorcycle urged the rider to use the quick-shifter rather than pulling in the clutch. We did find, though, that when at a standstill, finding neutral was a bit of a task, which was a bit annoying when at a traffic signal or, worse still, a traffic jam. 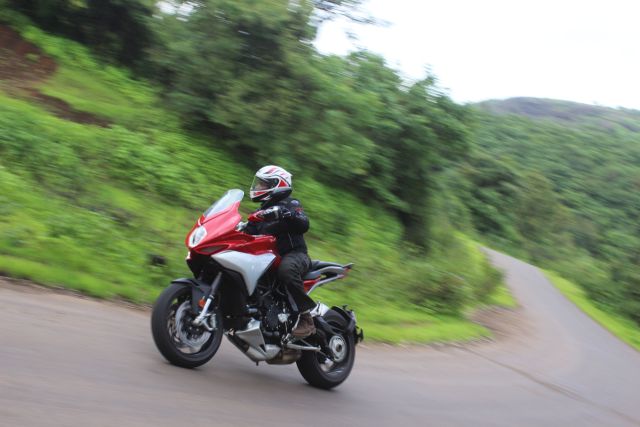 We rode the Turismo Veloce through the city where we are pleased to say, it did not feel cumbersome when filtering and manoeuvring through traffic. Apart from the comfortable riding position, the state of tune of the engine is another reason why this is possibly the most usable MV today. Its linear throttle made life very easy. In addition, in fifth gear at 2,500 rpm, we found no engine knocking at 35 km/h. Something to note, though, is the seat height, which comes in at a lofty 870 mm, which is, maybe, an issue for some of us.

Once on the highway, that lovely MV orchestra takes over. The Turismo Veloce screams past vehicles as you twist your wrist while keeping you comfortable with its riding position. The screen does a decent job of keeping most of the rider out of the wind. We had the manually adjustable screen in the higher setting for most of the ride. This kept the windblast off the torso, hitting you only neck up.

It is really when you hit the twisties that the MV Agusta Turismo Veloce reveals its true self. Once again, I find this a sports bike on stilts. The bike has a counter-rotating crank which helps it turn faster and, boy, does it work well! The Turismo Veloce is tremendously flickable and holds its line to a tee. Keeping the motorcycle planted are fully adjustable 43-mm Marzocchi front forks and fully adjustable Sachs mono-shock at the rear. This bike is a pleasure in the corners. Road contact is made via 120/70 ZR 17 front wheels and 190/55 ZR 17 rear wheels draped in Bridgestone Battlax rubber that offered good grip even when riding after a downpour. Stopping power is achieved by 320-mm Brembo double-floating discs in front and 220-mm two-piston Brembo calipers at the rear. Both front and rear are also fitted with Bosch’s 9 Plus ABS. In short, the brakes are superb with great feedback and feel. Combine all this with good riding ergos and you are less likely to suffer fatigue when spending time in the twisties. 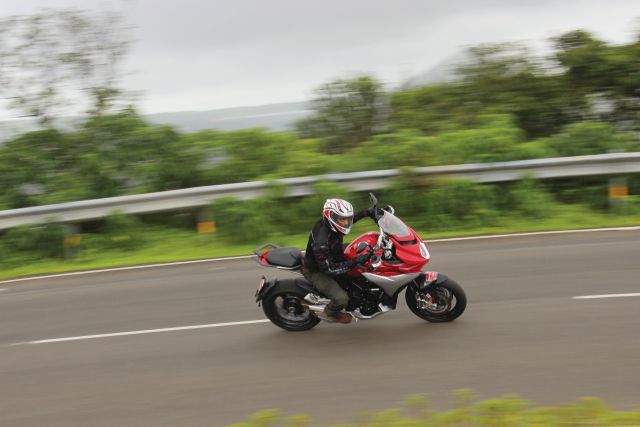 Well, price. MV Agustas are premium motorcycles that are always heavy on the wallet. The Turismo Veloce is no exception to this with an ex-showroom price of Rs 16.99 lakh as an introductory offer and Rs 18.99 lakh thereafter. Thus, the bike falls into BMW S 1000 XR territory. Here is where the dilemma lies for the buyer as the MV is a good bike but it does get pipped in so far as performance and refinement are concerned by the German. However, if you do want to own a piece of art, one that will turn heads even on the streets of Monte Carlo, you need an MV Agusta Turismo Veloce.