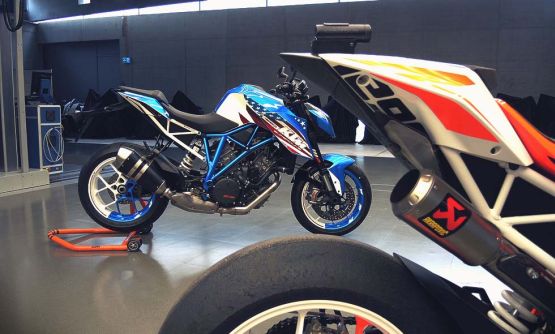 Austrian motorcycle brand KTM are well known for showcasing some of the most eye-catching creations on two wheels. The marque’s next big offering is aimed at the US market in the form of the Super Duke R Patriot Edition. The 1290 Super Duke which will soon see its official debut at forthcoming 2013 EICMA show will also be joined by this Special Edition at its stand. Featuring the Stars and Stripes and that all-American DNA, dealers at KTM USA are betting big on the Patriot Edition.

To further fuel the enthusiasts’ hunger for this new motorcycle, KTM USA have already released a new set of pictures of both the 1290 Super Duke R in factory orange livery and the US-themed Patriot Edition. The new beast might just be the most radical, wild and jaw-dropping KTM ever. For now, we think this sneak peak of the beast is more than sufficient.