In what was a much-awaited launch this year, Bajaj Auto finally let loose the KTM 390 Duke. The new motorcycle from the internationally-renowned Austrian off-road motorcycle masters is expected to break new grounds in performance and everyday practicality. Launched at an introductory price of Rs 1.80 lakh, it created a buzz in the industry which hasn’t happened in a while, flooding social media networks with excitement. For the record, the on road price in Pune is just a teeny-bit over 1.98 lakh.

Packing a 373.2cc single cylinder engine with 4 valves and fuel-injection, the 390 Duke pumps out 43.5 PS of power at 9,000 rpm, with 35 Nm of torque at its disposal from 7,000 rpm. The 6-speed transmission, front and rear disc brakes with standard ABS, USD WP front suspension and mono-shock rear suspension as well as the Metzeler tyres all complement its aggressive streetbike styling. There’s even a bunch of official aftermarket accessories to choose from like saddlebags, windscreens and grip protectors to personalise your ride further, while also making it a more adept touring bike.

However, the kicker is the power-to-weight ratio. Weighing just 145 kg dry, the 390 Duke boasts an unprecedented 300 PS/tonne. That’s 100 bhp/tonne more than its smaller sibling, the 200 Duke, and more than twice that of the usual crop of mass sports bikes we’ve had for so long. The 390 Duke has been positioned as an upgrade for riders of existing 150- and 250-cc sportsbikes and even is a credible option for existing Royal Enfield riders looking for a modern alternative which packs as much punch as it does character.

KTM has opened bookings in their 71 strong dealer network; the same network which will cater to after sales service as well. We don’t know for sure how long the introductory pricing will last, but already there is a 90-day waiting period for the exciting new 390 Duke. 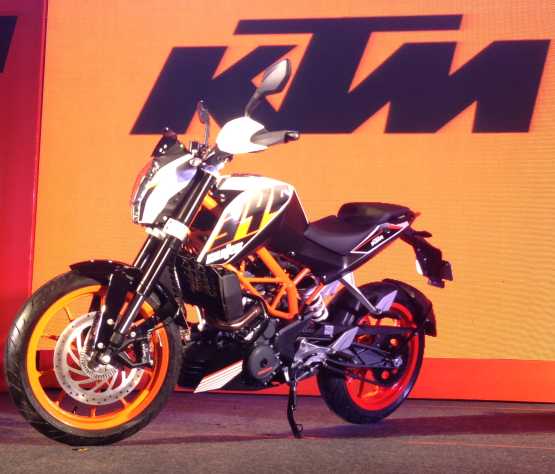