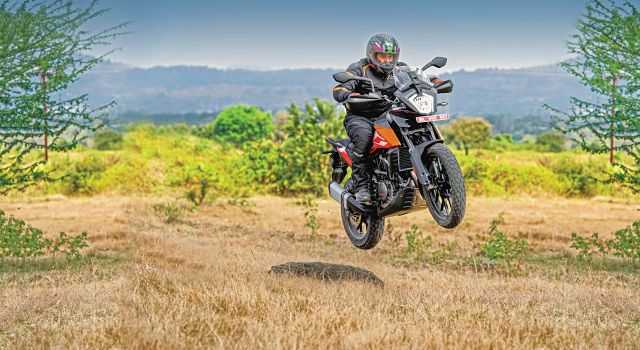 The KTM 250 Adventure is here, and we recently spent some time with the downsized Austrian ADV

At the most basic level, the KTM 250 Adventure is the frame, bodywork, and underpinnings from the 390 Adventure, with power coming from the 248.8-cc liquid-cooled single from the 250 Duke. While the smaller engine isn’t really much cheaper to produce, KTM have taken measures to keep costs down without compromising too much on core features and rider enjoyment, and priced the 250 Adventure at Rs 2.48 lakh (ex-showroom); over Rs 50,000 less than its larger sibling. 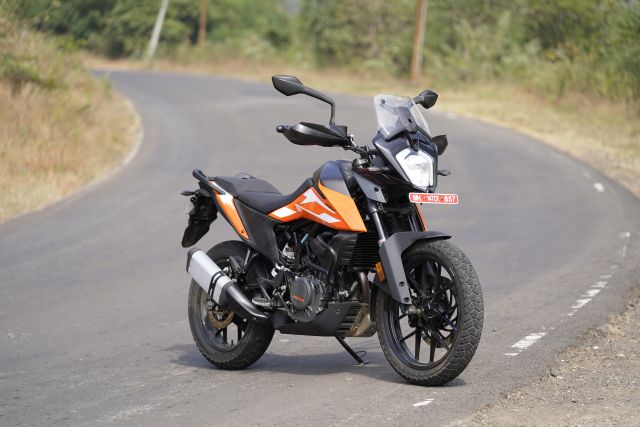 The KTM 250 Adventure shares its dimensions with the 390 and hence looks almost identical, but KTM fans will notice the headlight missing the vertical heat-sink, since the 250 gets a halogen rather than an LED headlight. Other than that, almost every visible component on this motorcycle is shared with the more expensive 390 Adventure, including the WP suspension bits at both ends with 170 millimetres of travel up front and 177 mm at the rear, 14.5-litre fuel-tank, assist and slipper clutch, and ByBre braking components with 320-mm and 230-mm discs. KTM have also switched from the sintered brake pads on the 390 to organic ones for the 250 Adventure, not to cut costs but due to noisy brake complaints from 390 owners. The brakes still work extremely well and I’d advise anybody facing this issue with their 390 Adventure to switch to the organic pads from the 250.

While frame, cycle parts, and more are shared with the larger sibling, compromises need to be made to remain competitive in a market such as ours. The first thing you will notice as you fire up the KTM 250 Adventure is that the full-colour TFT screen from the 390 hasn’t trickled down to this model. In its place you get a large LCD dash with a similar layout to the more expensive colour TFT; the screen is sharp and visible in most conditions, and I personally do not have a problem with this compromise as it serves its purpose just as well. The KTM 250 Adventure also reverts to a cable-operated throttle and does not get the 390’s traction control system, which again isn’t a big loss on a bike this small. The quickshifter, which I found quite primitive and inconsistent on the 390, has also been given a pass and I’m perfectly alright with that as well. My only concern was that the 250 Adventure does not come with the excellent Metzeler Tourance tyres from the 390, and is instead shod with dual-purpose MRF MoGrip Meteor tyres, but more on that later. 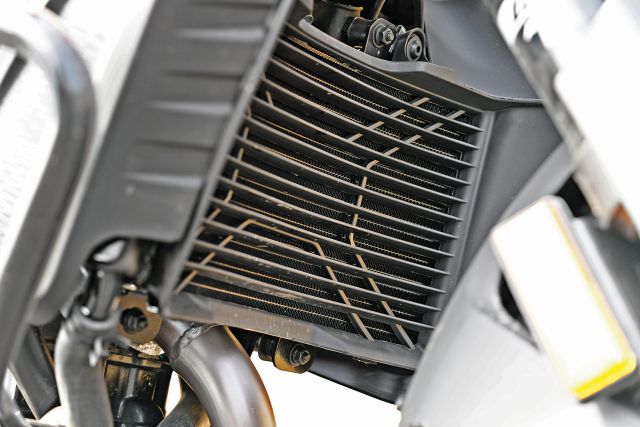 Other small bits aimed at cost-cutting are the non-adjustable levers and the steel rather than aluminium handlebar, but KTM have retained important components like the dual-fan cooling system and large curved radiator, meaning that the 250 Adventure does not overheat, even in stop-go traffic. Ultimately, this bike feels just as well-built and premium to ride as the 390 Adventure and achieving this with a Rs 50,000 price cut is no mean feat.

How is it to ride?

The spacious rider triangle felt just right, whether commuting in the city or cruising on the highway, and the broad, flat seat is supportive and all-day comfortable, with enough room to move around and find your perfect spot; once you’ve gotten used to the lofty 855-mm saddle height, that is. The motor from the 250 Duke is completely unchanged for this application and continues to make 30 hp at 9,000 rpm, with 24 Nm of twist being produced at 7,500 rpm. Power is transmitted to the rear wheel via the Duke’s six-speed gearbox and an unchanged 14/46 final drive ratio. 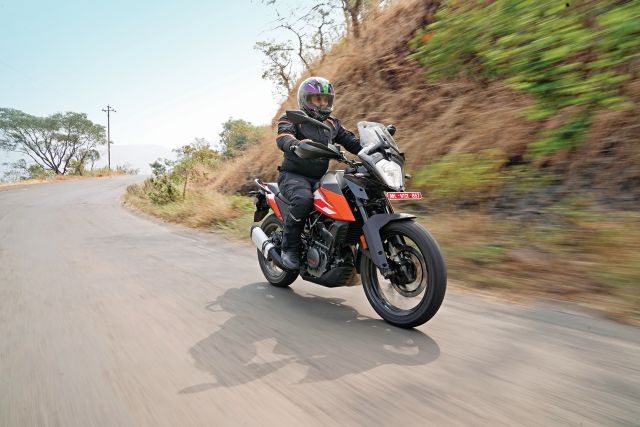 While this set-up suits the mischievous streetbike image of the Duke, a gruntier motor would have suited the adventure role better. Consequently, it’s not possible to ride the KTM 250 Adventure at anything below 4,000 rpm without the motor threatening to knock, and while it feels butter-smooth between 4,000 and 6,000 rpm, there is still absolutely no drive available. The engine finally starts waking up and pulling at around 6,000 rpm, and it is around the same time that you start feeling minor vibrations through the pegs and the handlebar. It would be unrealistic to expect a revvy single like this not to vibrate a bit, but the lack of low-end grunt is more a cause for concern for an entry-level adventure bike. 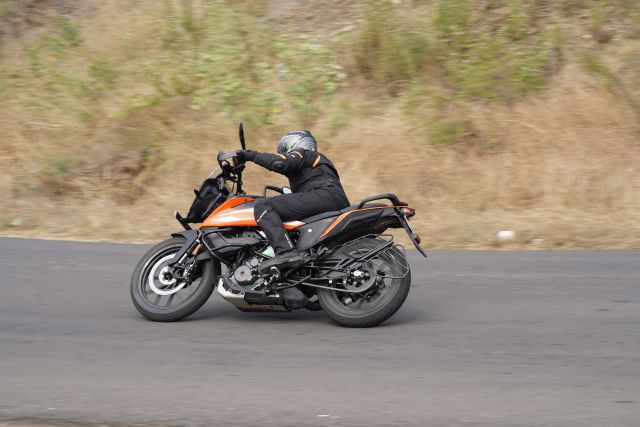 You realise this when strafing through city traffic, where you’re constantly dancing on the shifter to keep the motor on the boil to maintain fast progress. Conversely, the 250 Adventure is at home out on the open road where you can spin the engine up and enjoy the upper reaches of the rev-range. The bike cruises comfortably at 100-110 km/h and tops out at an indicated 140 km/h; so it’s definitely no slouch. I was also extremely impressed by the MRF rubber and, while I approached a set of fast twisties cautiously, the tyres immediately gave me the confidence to push harder and lean further than I thought possible. The dual-purpose hoops always gave me a connected feel and, while the Adventure may not be as quick to steer as the Duke, it felt stable and planted corner after corner.

Since KTM insist that this is a go-anywhere ADV, we were obliged to head into the dirt. The 250 Adventure flies over gravel and dirt roads assuredly and even takes rocks and high-speed bumps and ditches in its stride, but it is during slow-speed, technical manoeuvres that you wish you had a lower gear. Constantly feathering the clutch helps keep the revs up as you make progress, but this will wear out your clutch plates in the long run. 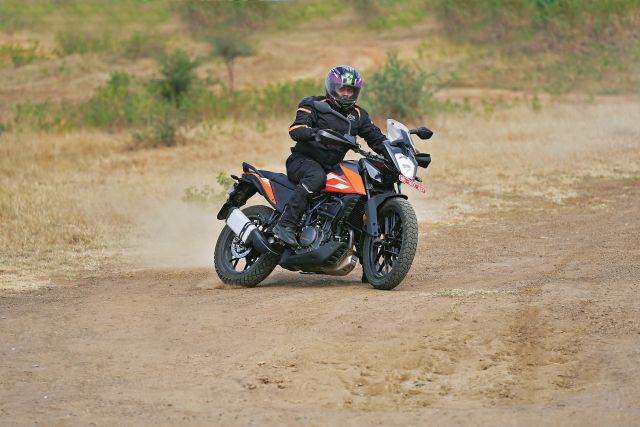 Somewhat shorter gearing would have helped mask this motor’s low-end torque deficit but, with the greater circumference of its dual-purpose rear tyre, the KTM 250 Adventure actually ends up geared slightly taller than the road-going 250 Duke, magnifying this issue. We had this same criticism for the 390 Adventure and KTM should have learned from the experiences with that bike and given the 250 a couple of more teeth on the rear sprocket, which would have made it so much more responsive off the line. The second place that KTM could have improved this bike based on feedback from the 390 Adventure is the suspension set-up. Most of us who rode the bike earlier this year felt that the suspension was way too stiff, especially for the novice off-roaders this bike is aimed at, resulting in the rider being bounced around over every bump. A slightly more pliant ride could have been achieved by easing up the damping at both ends, either by reworking the valving or using thinner oil, but KTM decided not to make the effort and gave this bike the same, rather stiff legs as the 390 Adventure.

Ultimately, the 250 Adventure is KTM’s way of welcoming more riders into the ADV fold at a more accessible price point than the 390. The bike is capable of covering great distances, thanks to the comfortable seat and 14.5-litre fuel-tank, and is worth your consideration if you are in the market for a touring machine and enjoy KTM’s revvy singles. On the other hand, if you aren’t really planning long trips, don’t intend to go off-road, and want something considerably faster and sportier in a similar budget, the KTM 390 Duke costs just five grand more.