Ducati is one of the foremost names in Italian two-wheeler history, so it figures that they would set off some proverbial fireworks at what the motor show at their home turf in the form of EICMA, and boy, did they deliver. Claudio Domenicali, CEO of Ducati was at hand to take the covers off (literally) the new 2016 line-up, and he spoke his piece before doing just that, saying, “In 2015 Ducati sold over 50,000 bikes: a huge success that was achieved without growth being a goal in itself: it was, rather, the result of our customers being extremely satisfied with our products.”

“After a long period of shrinkage, the motorcycle market is now showing promising signs of recovery and this, together with the effects of continuous product innovation and geographical expansion into new markets, has allowed us to increase sales in the first ten months of 2015 by more than 20% with respect to last year. This is an outstanding result, thanks also to the success of the Ducati Scrambler, a brand that won over new fans immediately. The title of the Ducati World Première 2016 was ‘More than Red: Black, Wild and Pop’. The message is clear: Ducati is strongly rooted in the sports motorcycle world and is continuing to extend its reach. And that means expansion into new segments: Black like the XDiavel, a true cruiser; Wild like the Multistrada 1200 Enduro, a bike to break down the barriers on any terrain; Pop like the Ducati Scrambler Sixty2, an even lighter Ducati Scrambler with all the appeal of its smaller 400-cc engine.”

“In total we have seven new bikes at EICMA 2015. These, together with the Monster 1200 R, already presented at Frankfurt, and a new Ducati Scrambler version developed jointly with Italian Independent to be presented at the end of the year, bring the number of new Ducati bikes for 2016 to nine.” 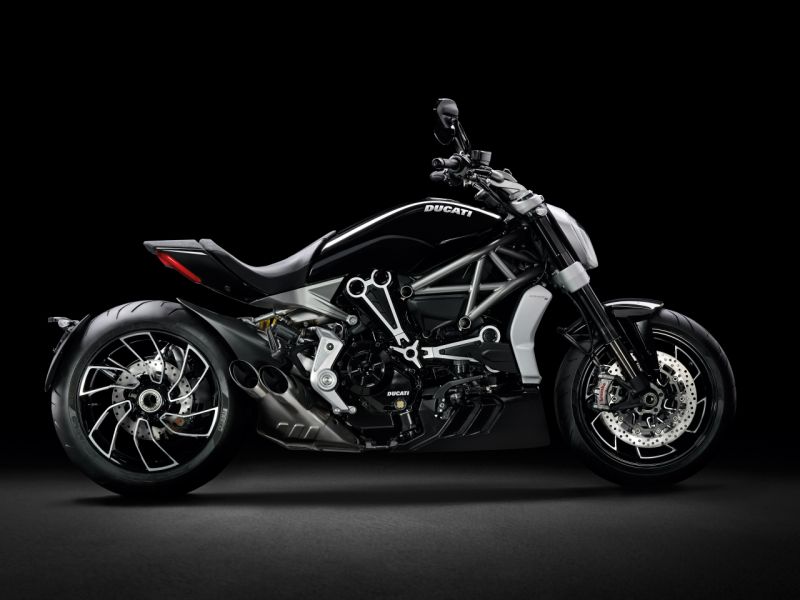 Domenacali has already covered what was launched, so let’s dig straight into the deets. First the XDiavel, Ducati’s very own power cruiser. The Ducati Testastretta DVT 1,262-cc V-twin engine produces 156 PS and torque figures of 128.5 Nm peaking at 5,000 revs. The bike also comes equipped with 60 different riding configuration options, and is the first Ducati to use belt final drive. The XDiavel also has a very un-cruiser like maximum claimed lean angle of 40° which is impressive, at least on paper.

In terms of tech and safety, the XDiavel has it in spades with the Bosch Inertial Measurement Unit (IMU), Ducati Traction Control (DTC), Riding Modes, Bosch Cornering ABS, Cruise Control and the Ducati Power Launch (DPL) system. If that wasn’t enough, Ducati have also announced the launch of an even madder XDiavel S version. 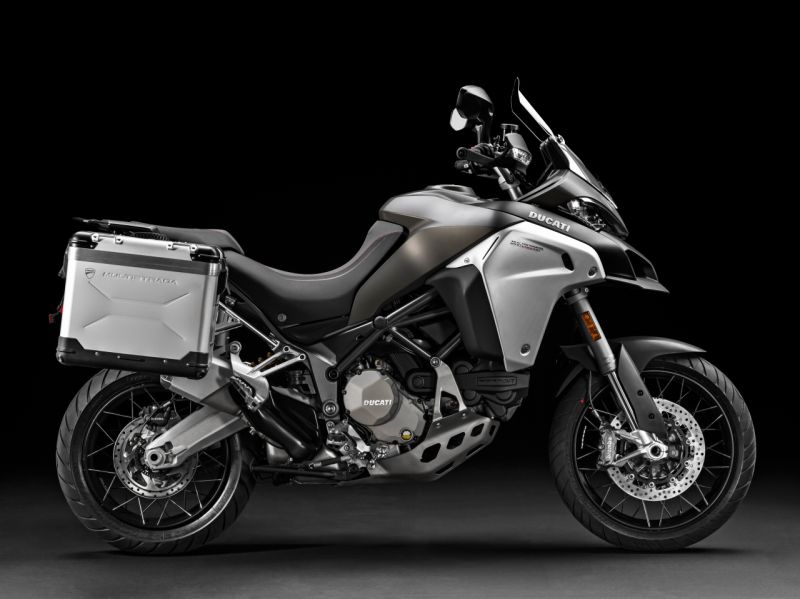 Next up is the Multistrada 1200 Enduro, the biggest multi-terrain offering from the Bologna boys till date. Which means, it has to have spoked wheels, and it does, 19” in the front and 17″ in the back. It also features an electronic semi-active Sachs suspension system in the front and the back to add to the off-road fun, and a 30-litre petrol tank to last the distance for the touring fan.

In terms of kit, the Multistrada 1200 Enduro comes equipped with Cornering ABS, Cornering Lights (DCL), DTC, Ducati Wheelie Control (DWC) and the semi-active Ducati Skyhook Suspension (DSS) Evolution system, with 200 mm of wheel travel, all standard. Those cumbersome uphill starts have also been addressed by Ducati with the inclusion of Vehicle Hold Control. And, of course, you can’t have an Enduro bike without a wide bouquet of dedicated accessories, and the Multistrada 1200 has that, with the aluminium luggage set clearly on show at the launch. 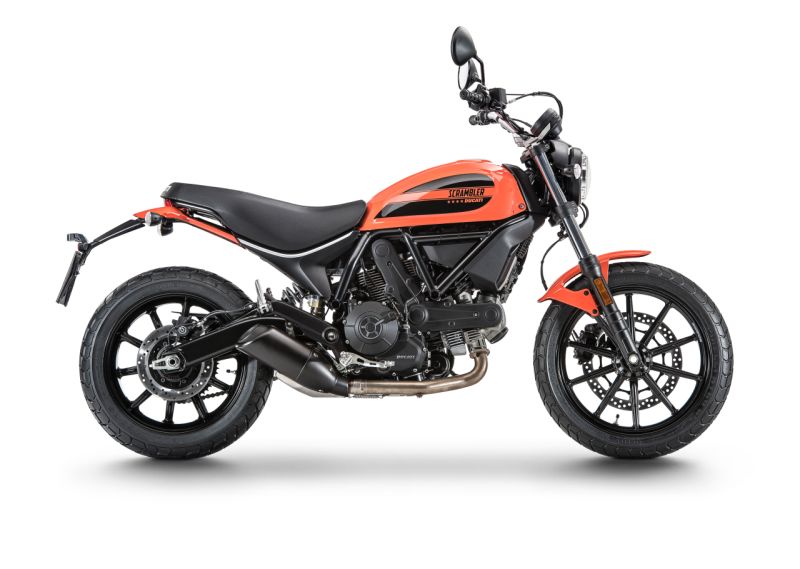 The other big announcement from EICMA, and one that will probably excite Indian fans the most, is the Scrambler Sixty2, the 400-cc avatar of the Scrambler Ducati. Called ‘Sixty2’ in homage to the original Scrambler that the Italians launched right in the middle of McQueen-mania in 1962, changes from the full-sized Scrambler includes a new 160/60-17″ rear tyre to aid handling, which is also supported by the standard-fitment ABS. The Scrambler Sixty2 will of course, also have the same customisation capabilities and options as its bigger brother, and hopefully will be as much of a blast to ride as well. 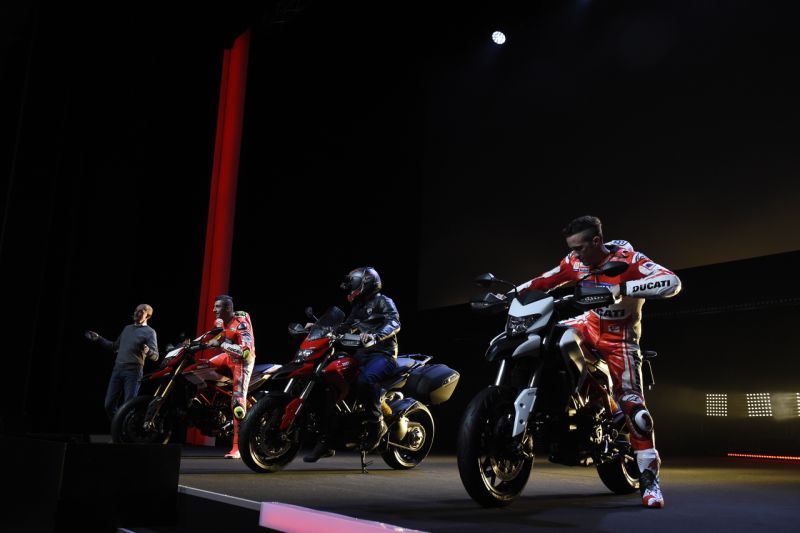 Motor sport stars repping Ducati were glimmering on stage too, as both Ducati MotoGP factory riders in Andrea Dovizioso and Andrea Iannone each rode versions of the new Hypermotard 939 onto the stage. 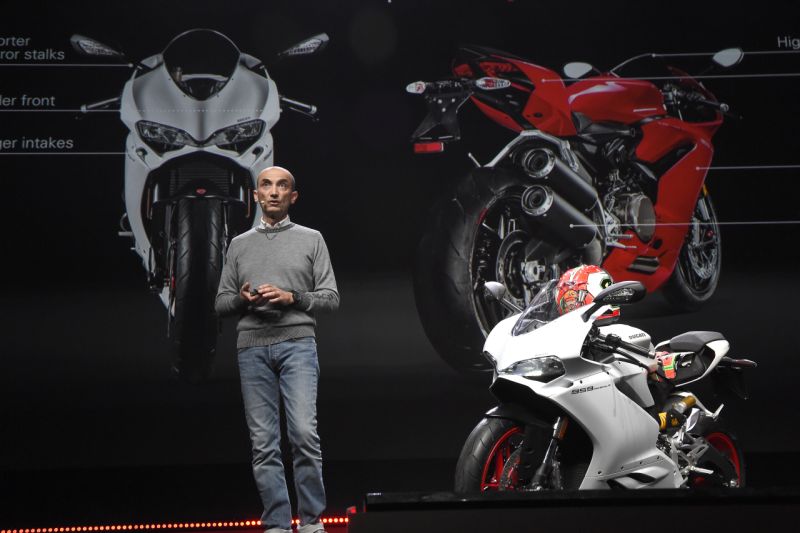 Davide Giugliano, Ducati WSBK factory rider brought in the new 959 Panigale, and legendary racer Troy Bayliss was also at hand to show off the Flat Track Pro version of the Ducati Scrambler. 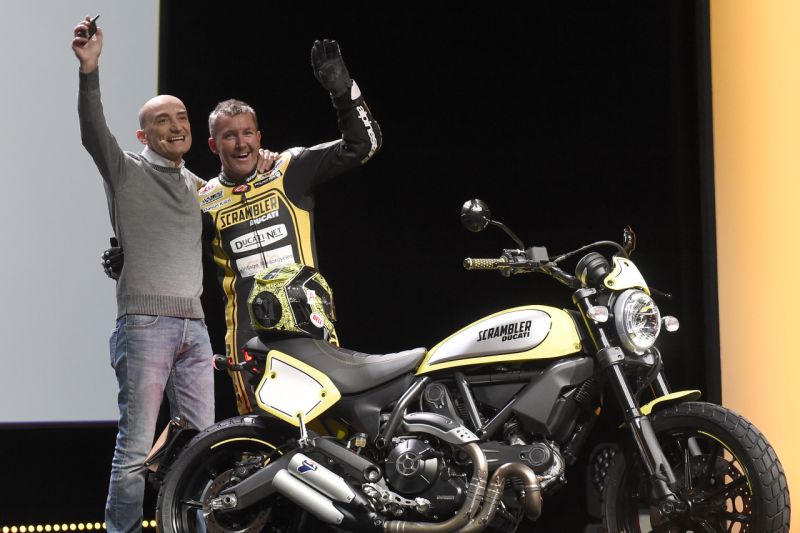 That’s all for now, we’ll keep you updated as more details continue to emerge, so watch this space.