Ever wondered if you could have an invisible ride like the Aston Martin which Pierce Brosnan used in his stint as 007 for the film ‘Die Another Day?’ Well, if you scale down your hopes quite a bit and are willing to settle for a bicycle, this could now be a reality thanks to a concept by German specialists, Designaffairs.

The ‘Clarity Bike’ – as it has been aptly named – is quite an hi-tech tool itself for us normal Joes. Built from a polymer called ‘Trivex’, which is the same strong, lightweight and transparent plastic used in fighter jet canopies, the bike is barely visible to the naked eye. On top of that, Trivex is also incredibly light but can withstand major shocks. It’s also resistant to extremes of heat and cold, and can be moulded to take any shape or form as desired, making it the perfect material to craft a bike from.

The creators of the ‘Clarity Bike’ of Designaffairs state, “We believe that the Clarity Bike could be a giant leap forward in bicycle frame engineering and production. The design takes advantage of an advanced polymer which combines high impact resistance, lightweight properties and a gentle flexibility that usually would only be expected on an old Italian steel frame.” Although, the bike is only a concept for now, the creators will soon be building them on a full-fledged production basis. Well we certainty do feel that this is that one bike which would surely bring out the hidden 007 in you. Just be on the lookout for errant traffic and pedestrians! 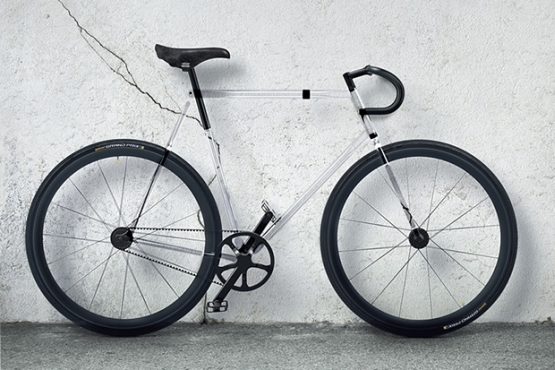