We bring you the Bike India Project Bike story wherein we walk you through the modifications made by us to enhance an already superb machine.

Little did the footfall at the EICMA 2017 know that a motorcycle company would be showcasing a true storm in the industry. The truth of the storm would still continue to elude our minds for a further year, as all that was whiffed at the Milano motorcycle show was a visual peek-a-boo of a future champion. The motorcycle company in question is, as you have probably guessed, Royal Enfield, and the victorious models were their new shocking twins. 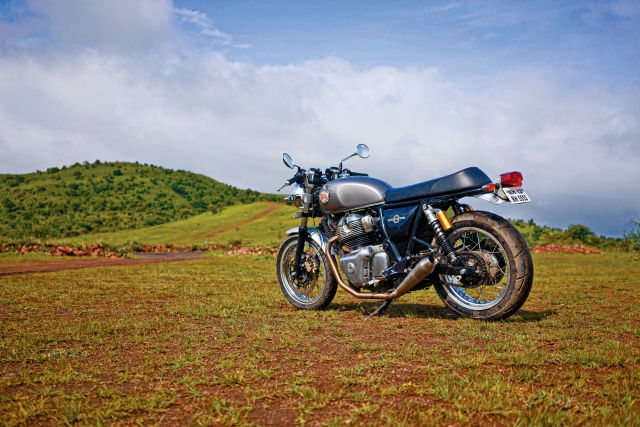 Come November 2018 and journos from around the globe got their first taste of the two twins, the Interceptor 650 and the Continental GT 650. The Californian twisties had everyone very impressed and soon thereafter Royal Enfield announced the big one in India, its weight on one’s wallet. ‘Boomshakala’ was heard resounding from every motorcycle fan and, oh, so rightfully so. Test rides were demanded, yet patiently awaited, and when one finally got a chance to ride either of the two, a grin soon turned into an exchange of money for a Royal Enfield Interceptor 650.

However, one of the most appealing things about owning this machine is its ease to customize. The internet is choc-a-block with ladies and gentlemen having done some amazing jobs and here we are going to talk about our modification to the Royal Enfield Interceptor 650, code-named “The Bike India Project Bike” (Umm, We are fans of Dr Evil). 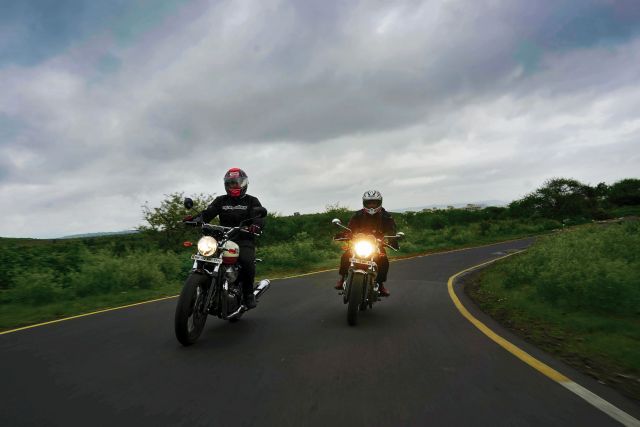 The story was simple right from the get-go. Modifying a motorcycle for some may have visual appeal held in the highest regard. Nothing wrong with that, but, for us, performance sat above all. You see, no matter how beautiful your motorcycle may be to look at, the feeling it gives you when in the saddle is the true pièce de résistance. The Bike India Project Bike has been worked on by our editor, Aspi Bhathena, and his brother, Sheri Bhathena, who owns a highly regarded motorcycle workshop in Pune. Both of them have been building successful race motorcycles for the past 40-plus years. It is here where I first took my Interceptor 650 with plans of a retro-cool scrambler, set for dealing with all things scrambling and speed-breakers. Unfortunately for the scrambler plan, Aspi was working on a Continental GT and there arose a problem. I love scramblers, they are arguably my favourite style of motorcycle, but, after having been introduced to the Continental GT that Aspi was working on, hearing what’s been done and why, well, the decision was made easy: a scrambler would be my next project, this one would be a café racer. The Bhathena family’s expertise is well known and explaining that would require a second edition of the magazine. However, reading the following should give you some idea of what is meant. 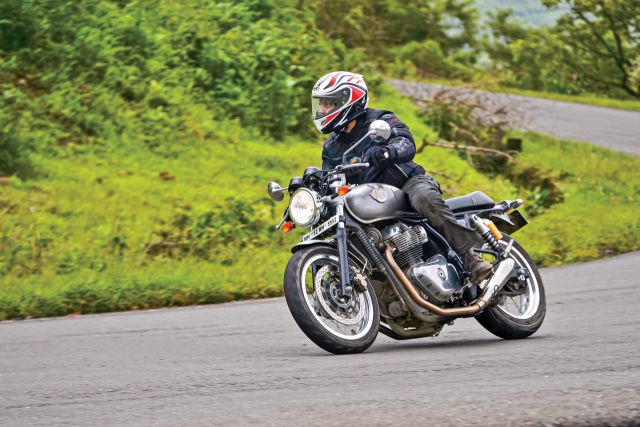 Ergonomically, the Interceptor 650 has a very relaxed riding position as we know. But an aggressive riding position is what café racers are known for and hence clip-on handlebars were chosen, the same ones that you find on the Continental GT 650. However, it is the suspension that really tells the story correctly. The forks on our bike have been lowered an inch and a half from the steering column without losing any travel. They are also fitted with pre-load adjusters to stiffen the front for a sportier rip or loosen up to a leisurely waltz, we have them at the former. These adjusters have been built by Aspi himself and his experience really shows when in the saddle. The front end darts into the chosen direction but in a very collected manner. A must-have for all those who love their weekend carve. For levelling out the machine, the same has been done with the rear suspension, but only by an inch. Lowering the bike has improved its centre of gravity as the motorcycle’s torso now sits closer to the ground. In addition, the lowered forks have quickened the handling and the bike stays a lot more stable through the twisties, with no signs of a wave or wobble. Yes, the ride height is lower a fair bit, too, now, which does have an important adjustment. Due to the lowered ride height, we had to remove the centre stand. While we would never do this if we were making a motorcycle to tour on, this is apt for city commutes as well as one’s weekend happiness. The lower stance also helps manoeuvring the motorcycle with one’s legs. Since the bike is lower, your legs can be wider apart and not get caught on the foot-pegs, a situation we find often on the stock bike. 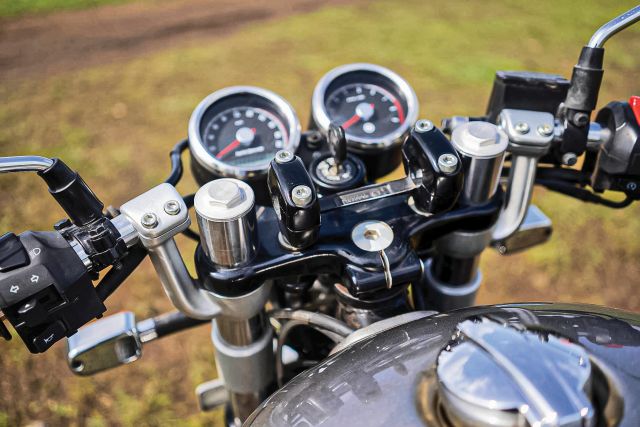 The rear suspension, though, has been put through a few more adjustments. The important adjustments: we have shortened the damper and also moved the mounts on the swing-arm an inch forward. What this does is increase the leverage and change the angle of the suspension, which has improved the ride quality and handling of the bike without upsetting the comfort. The suspension sports a slightly soft initial phase, because of the leverage, but, as the suspension compresses, it stiffens further due to the change in angle. In simple terms, it means that the suspension compresses less and the rear wheel has more movement, which, as we know, helps keep rubber on the tarmac and the bike more stable. 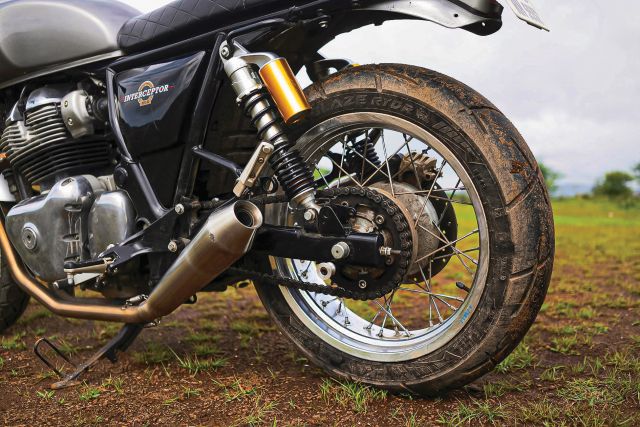 We also changed the rim size, fitting 17-inchers at the front and the rear. The reason? Well, choices for rubber. All motorcycle tyre manufacturers produce 17-inch rubber, whereas the 18-inch ones we see on the stock Interceptor aren’t used by many. The handling is also improved here, once again the smaller wheels help with quicker and sharper handling albeit while staying true. The feel from the front end is confidence-inspiring and especially felt with quick changes of direction as compared to the standard set-up. The feedback received when pushed is calmer and something that won’t catch the rider off-guard; instead will just hint that you may want to either ease it down or become a better rider. Considering these, we now have a very noticeable improvement in handling, but what about the most sought-after modification: power? 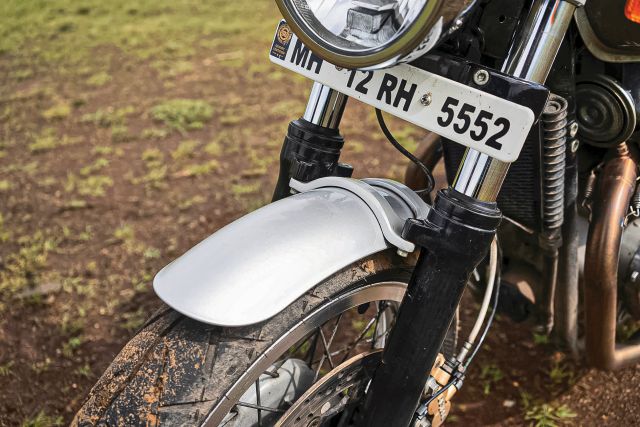 An ECU? Air-filter? Nope, at the moment the only upgrade has been to the silencers. However, we changed not just the exhaust, but also the bend pipes. Made by an exhaust manufacturer in Pune, these units were made to specification laid down by Aspi. This is a tuned length exhaust system, a system that falls within the ideal length to gain power. A little too big or too small would have you lose power rather than gain it. The new exhaust system looks mean and falls between the two axles, allowing a better centralized weight distribution. These things of beauty have shocked us with their performance numbers after being tested. At the India Bike Week 2019, we ran the Interceptor 650 on Race Dynamic’s Dyno test, where it scored 40.1 hp at the rear wheel. That is a four horsepower upgrade from the standard model that has been tested by the Bengaluru-based company which produced 36.1 hp at the rear wheel.

Then there’s the weight, as the standard Interceptor 650’s bend pipes and exhaust weigh 8.5 kilograms each. The new system weighs in at 2.7 kilograms each, which, if one’s maths is correct, can find an 11-kilogram weight loss. That in the motorcycling world is highly embraced and understandably plays an important role in handling. 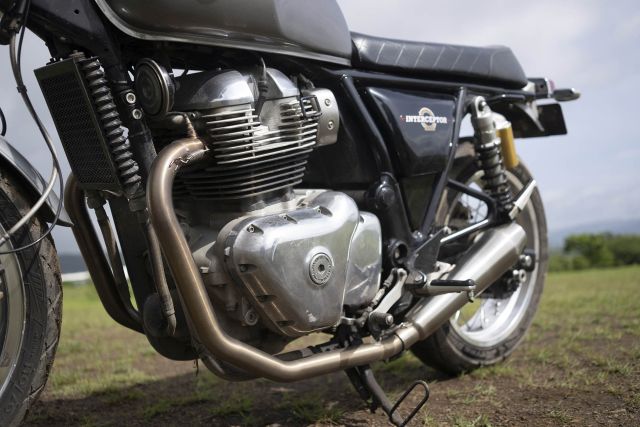 In addition, the tyre we are running at the rear is a 140/70. The height of the new tyre is a fair bit more than the standard motorcycle’s 130/70 size. What this amounts to is a minuscule drop, where we find that we do not lose out too much with the gearing, as even though there is a one-inch drop from 18-inch tyres to 17 inches, the higher profile and diameter of the wider 140 section tyre shortens that gap to almost zilch. There is a better pull due to the power and gearing, with only a loss of five km/h seen through the top speed in all gears, an example being if a stock Interceptor 650 does 130 km/h in third gear, our bike would do 125 km/h, albeit quicker than the stock bike. But what this entails is that we have more power in sixth gear and will still continue on to get a lot closer to the red-line. This amounts to a better top speed. Another example. On our trip to Goa, the Interceptor 650 was clocking past the 200-km/h mark and still going. Hence, even with the new speedo error of almost 20 km/h, we are quite certain the bike is good for over 185 km/h. 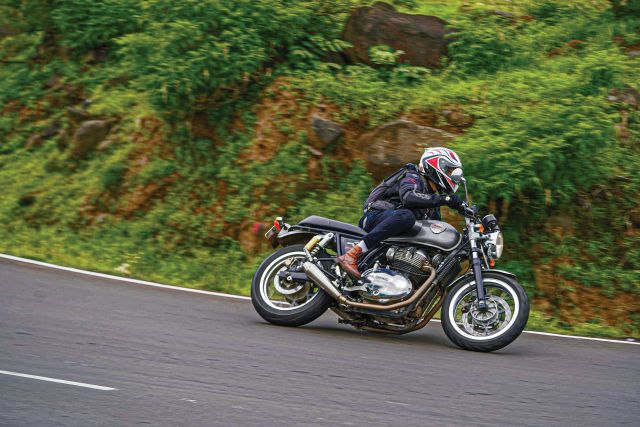 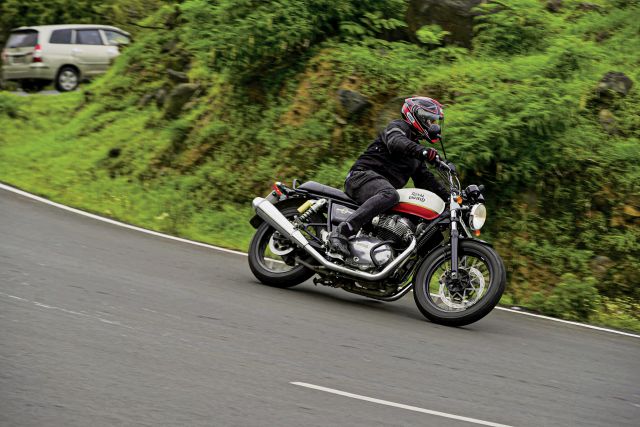 The Bike India Project Bike build has indeed been a success story so far. One that can be enjoyed leisurely strolling through traffic in our crowded cities or through the ghats on the weekend. Yes, there are a few more modifications we would like to try out; an air-filter, maybe, rear-set foot-pegs, and the Continental GT tank which would allow more aggressive clip-on handlebars. Would have been easier to just have bought the Continental GT then, but some people are always indecisive (me).

We have tested the Powertronic ECU system, but that deserves to have its own story and we chose to review it on another stock Interceptor. The reason for that is an accurate understanding of what it offers without the addition of an exhaust system. Maybe, a little later, we shall test a twin with the works. The Royal Enfield 650 twins are brilliant motorcycles to start with and performance upgrades just enhance the product but should be considered based on one’s use. This current project bike of ours is not meant for rough surfaces, but more inclined towards the tarmac and it sure is. But the beauty is that if the need ever arises to undo all the modifications and return to its original avatar, well, that can be done easily. Furthermore, if the need further arises to make the bike into a scrambler, that can be done with the same ease too. I believe that is the brilliance of the Royal Enfield Twins.

Get in touch with us if you have any queries about any of the mods or if you’d like to do something similar to your twin. Until then, enjoy your motorcycles, folk. Ride safely and stay safe.