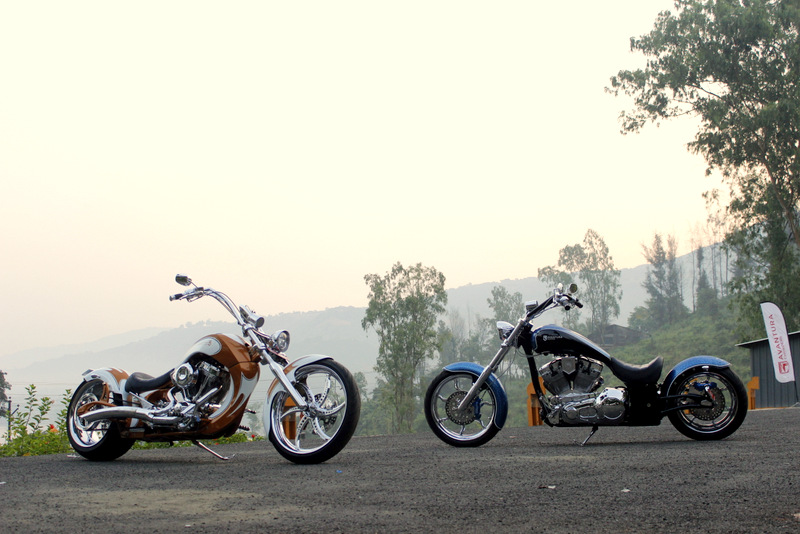 The first two product’s in Avantura’s line up. Rudra (left) and Pravega (right)

If you are looking for a classic American Chopper here in India, there haven’t been any options that don’t involve heavy customisation to cruisers….until now. Avantura Choppers have been launched in India, and two massive bikes have been unveiled, both priced above Rs 20 lakh.

The Rudra is priced at Rs 23.90 lakh and the Pravega at Rs 21.40 lakh (both ex-showroom, Mumbai). The bikes have been designed by Kevin Alsop of Big Bear Choppers, USA fame, and each intricate detail has that signature ethos that is classic Americana. From the chunky rear tyres to the long wheelbase, low single seat and upright riding stance, everything screams radical.

Powering the bikes is an S&S 2,000+ cc engine, mated to a six-speed gearbox. Output figures are yet to be announced as the bike is still under ARAI certification testing. Other components include disc brakes with six-piston calipers from Beringer, however, as yet these bikes do not sport ABS. Both bikes also come with custom seats from Mustang, among other things. Pre-bookings for both bikes will be open from the start of India Bike Week 2017 on 24 November, and each bike will be customised to suit individual tastes. This will include options for peg positions, handle bars, paint schemes, graphics and more.

Speaking at the launch, Gaurav A Aggarwal, Founder & CEO of Avantura Choppers said, “The Rudra and Pravega are our first two models offering the Indian rider, an unparalleled biking experience. We set out to manufacture a product from the ground-up, which maintains the highest standards of production quality while ensuring a mind-blowing ride. It is my firm belief that the evolving riding community will find that we have done justice to our ambition.”

We have ridden both the Rudra and Pravega, and you can catch our comprehensive review in upcoming issues of Bike India magazine.