The Triumph Trident 660 will compel you to visit a Triumph Motorcycle showroom if you’re planning to buy your first big bike. 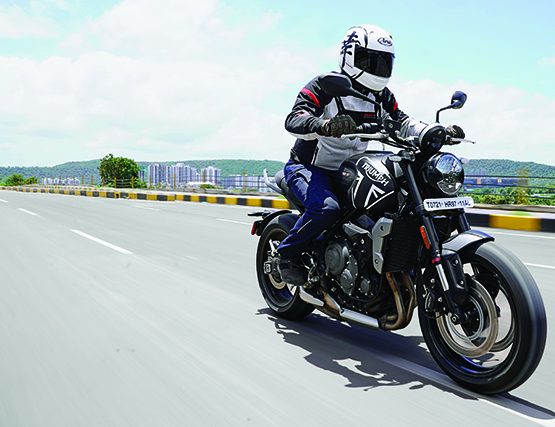 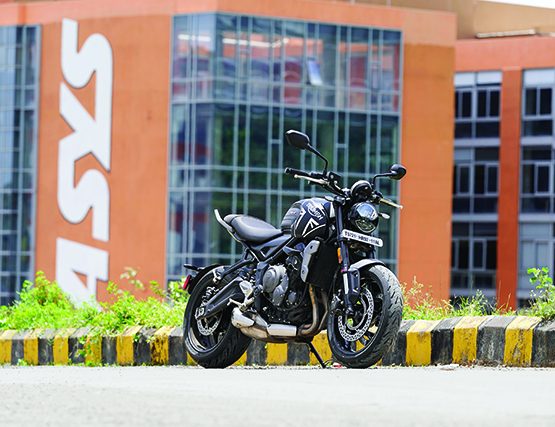 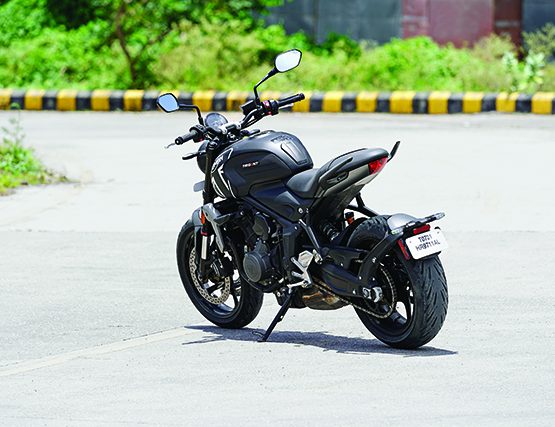 Last month, my experience with the Triumph Speed Triple was thrilling, to say the least. Only if the rain gods were kinder, it would have been an even more exhilarating experience. And now that I’ve ridden yet another Triumph, I am having a tough time letting it go. An emotion only a handful of bikes have managed to kindle recently.

We sampled this all-new roadster from the British brand on the hills a couple of months ago. Now we get to ride the Triumph Trident 660 around the city to get a taste of what’s it like to live with it. Being the most approachable in-line three from the marque, the Triumph Trident 660 nicely fits the void created by the new Street Triple which has evolved into a high-performance, larger-capacity motorcycle with more electronics and a heftier price tag.

Triumph Trident 660: Design
The no-fuss styling of the Triumph Trident 660 stands out from the current razor-sharp offerings and a healthy mix of neo-retro bits add to the cool quotient; like the round LED headlamp, a single-pod circular instrument cluster, and the tear-drop shaped fuel-tank. The deep knee-recess on the tank along with Triumph’s “Union Jack” livery looks gorgeous. So does the neat tail section with the flush-finished LED tail-lamp, though I’m not a big fan of the indicators and number-plate being mounted on the rear tyre-hugger. It’s a tidy looking bike with good attention to detail and with fit and finish worthy of the Triumph badge.

Triumph Trident 660: Ergonomics
Swing a leg over and it feels light and manageable. There’s no unnecessary bulk and it is extremely compact for a 660-cc motorcycle without being cramped. With my average frame, I could get both my feet firmly on ground thanks to the tapering seat and 805-millimetre saddle height. This makes it perfect for beginners too. With my knees securely gripping the curvy tank, my hand on the narrow handlebar, and feet resting on the slightly rear-set foot-pegs, we headed out to face the world.

Triumph Trident 660: Engine
At the heart is a 660-cc triple-cylinder unit which is based on the one that powered the much-loved but now phased out Street Triple 675. The engineers in Hinckley have extensively re-designed the internals, including a completely new clutch, cams, and crank. So, it still retains the same character and feel, but now the focus is on providing better low-end and mid-range performance. Its 81 hp peak power is produced a little over 10,000 rpm and that’s more than a handful for most. Twist the throttle and you’re rewarded with the distinctly Triumph Triple sound. You’ll end up using the exhaust note to warn off people, because the meek single horn isn’t up for the task. 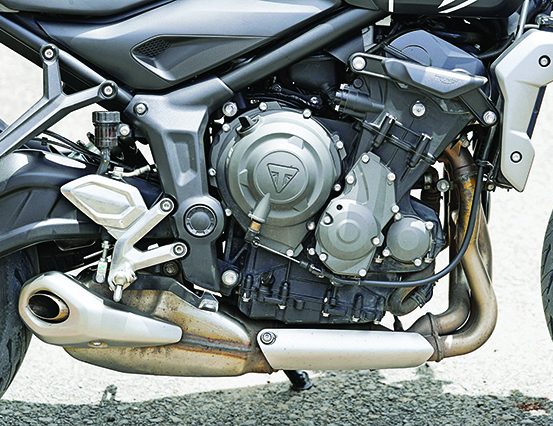 Triumph Trident 660: Features
In terms of gadgets, you get a customizable TFT colour display, but it throws way too much info to grasp while riding. You also get “Rain” and “Road” riding modes which can be swapped on the go to suit the changing conditions. As you would’ve guessed, “Rain” is ideal for low-traction surfaces as the power delivery is mellowed down. In fact, even in “Road”, the initial throttle response is so easy-going that I felt that the bike was in the wet mode. This smoothness makes the Trident ideal for our congested urban environment, even in new or rusty hands. Squeeze the throttle further and you’re rewarded with the sweet Triple treat. When you beckon the 81 hp, the Triumph never feels out of control or intimidating. This is one of the most powerful bikes in its class and the usual suspects on the road can match the pace.

Triumph Trident 660: Performance
Wring it hard and three-digit speeds come in quick, though at times it tends to hit the limiter if you don’t shift up fast enough. Be over-enthusiastic and the traction control can be felt coming into play. This isn’t a bad thing and you also have the option of turning it off altogether. Some vibes on the handlebar beyond 6,000 rpm and that’s probably the only critique this engine has. The wide turning radius makes U-turns in tight spaces seem tricky, but you’ll thank Triumph for keeping the motorcycle’s kerb weight a light 189 kilograms. And being a naked bike, there’s evident wind blast to deal with.

Though the Trident produces as much power as the old 675, it does churn out a good amount of torque. Most of the 64 Nm of twist is produced right from 3,500 revs and all the way to the red-line. This gives the bike an extremely tractable character, with enough grunt allowing you to whizz through gaps in traffic effortlessly. The revised gear ratios of this six-speed ’box come in handy here. In the city, you’ll make good use of the shorter first four gears. I spent most of my commute in just the third gear. In fact, the Triple can hold 45 km/h comfortably even in top gear without knocking. Since it gets a slipper clutch, you don’t have to worry about hard downshifts either as the rear wheel won’t lock up and the bike retains its stability. These really help in making it a rather friendly bike to ride.

Triumph Trident 660: Ride and Handling
The inverted fork is just to enhance the cosmetics but it works really well. The Showa isn’t high-end and so doesn’t offer damping adjustment, but the set-up is ideal for a street bike like this. Honestly, for your usual riding you won’t even need to tinker around rear pre-load setting either. But it’s good to have that adjustment in case you plan a longer ride with a pillion or with some luggage. In stock set-up, the Triumph absorbs most of the road undulations without cribbing, yet it holds on to the road when going fast and remains flat while pacing through corners. The Trident 660 feels so light and easy to steer, riding it around bends is just so effortless. Honestly, it’s not designed for mad leans nor to scrape foot-pegs, but it’s extremely nimble and goes exactly where you want it to. It feels sharp enough, quite responsive, and changes directions exceptionally well. This is one fun and playful motorcycle that you want to ride all day.

There’s ample ground clearance so you don’t have to worry about it scrubbing its belly over a speed-breaker. I must mention the terrific Michelin Road 5 tyres that offer tremendous grip on tarmac and even on cemented roads. Even the monsoon-washed roads spattered with gravel couldn’t shed off the trust. And with every passing kilometre you feel more confident to push the Trident more. I would have loved to see fancier Brembo monoblocs, but the stock Nissin two-piston calipers and twin 310-mm front discs get the job done with a firmer grip.

Triumph Trident 660: Conclusion
With prices starting at Rs 7 lakh (ex-showroom), the Triumph Trident 600 isn’t cheap. It costs about Rs 75,000 more than the Kawasaki Z650 twin but undercuts the Honda CB650R in-line four by Rs 1.70 lakh. The Triumph Trident 660 is motorcycling in its purest form, with a sweet motor, an enjoyable road manner, and without too much electronics. Riding bikes like the Trident 660 is why I uprooted my home 2,000 km away and pursued motoring journalism in the first place. Mission accomplished.