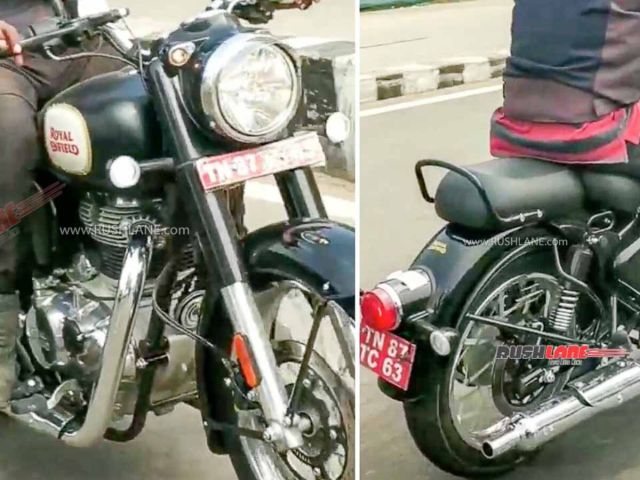 Powered by the new-generation SOHC, 350-cc motor from the Meteor and featuring minimal design changes, the new Royal Enfield Classic 350 is closer than you think.

New spy shots have emerged of the upcoming Royal Enfield Classic 350, this time sans camouflage, and it is clear that RE wish to stick with the tried-and-true design that has worked so well for them over the years. The bike in these spy shots retains most of the design elements from the outgoing model, but we can see the new double-downtube frame and the air-cooled SOHC motor from the recently-launched Meteor 350.

While we haven’t received official word from Royal Enfield yet, we expect the motor to retain the same state of tune as the Meteor, making 27 Nm at 4,000 rpm and 20.4 hp at 6,100 rpm. The motor will be mated to the slick-shifting five-speed gearbox that impressed us in the Meteor, and while we can see discs at both ends in this picture, we also believe that the new Classic 350 will be equipped with dual-channel ABS.

While the 2020 Royal Enfield Classic 350 retails for Rs 1.70 lakh (ex-showroom), we expect next year’s bike to be priced similarly or slightly higher, and it will probably sit just below the Meteor range’s 1.75 to 1.90 lakh price point. Stay tuned for more updates about the launch as they happen.