We talk to India’s best professional motorcycle stunt group to find out what a day in the life of a stunt biker is like
Story & Photography: Rommel Albuquerque

Ever since we were young kids most of us motorcycle riders have at some time or other wanted to perform motorcycle stunts. For me it started when I was about seven years old and started pulling small wheelies and stoppies on my BMX stunt bicycle. As I grew up my stunting went downhill, but every now and then I still try some stunt or the other on my own motorcycle. So you can imagine the smile I had on my face when I was asked to spend a day with India’s best motorcycle stunt group, the Ghost Ryderz, and watch them perform their jaw-dropping stunts live.

Who They Are
They had come down to Mumbai for a gig and that’s when I got to meet the group. They are called the Ghost Ryderz, ‘GRz’ for short. They started off as a motorcycle touring club in 2007 and later evolved into a fully fledged freestyle stunt riding team. They have about 30 members and their team is based in Thiruvananthapuram, Kerala. Three of their main riders are from Chennai, Tamil Nadu. For these chaps stunting isn’t just a hobby, it’s their profession.

Says Shrikant Rajan, one of the team’s younger riders, “After passing the standard XII examination I got into college to pursue a course in architecture, but I realised that it wasn’t my cup of tea and my love for biking was increasing day by day. I met these guys, who called themselves the Ghost Ryderz, and found my calling. We all share the same passion and this is my profession now.” 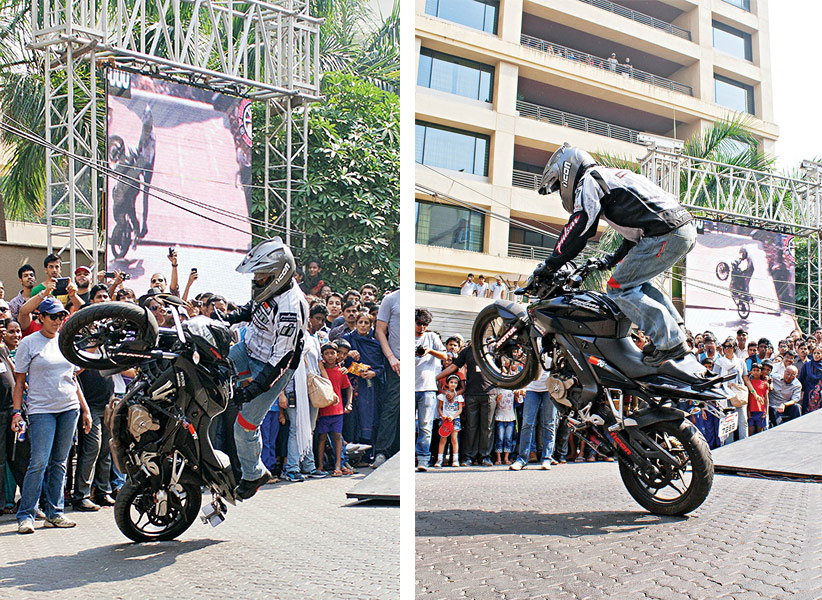 Stunt Biking As A Career
According to me, any profession where your job translates into your life being at risk is never a light task. But is stunt biking as a career tough? Most people think it’s all fun and games, but Mikhil Mohan, owner of the team and the main performer, says, “It’s a very tough career. The main hurdles are high operating expenses, non-availability of proper practice spots in crowded cities and the negative attitude of certain sections of the society towards stunt riding and stunt riders. In India stunt riding as a sport is still in its infancy and a lot of athletes are not sponsored, making the monetary benefits rather meagre. Thankfully, our team has five sponsors and so we get paid well for our performances because of the fact that we’ve managed to keep our team at the top for the past five years. Moreover, we also do stunts for advertisements, movies and music albums. But we still don’t take a lot back home as we invest quite a bit back into promoting the sport and the team.” 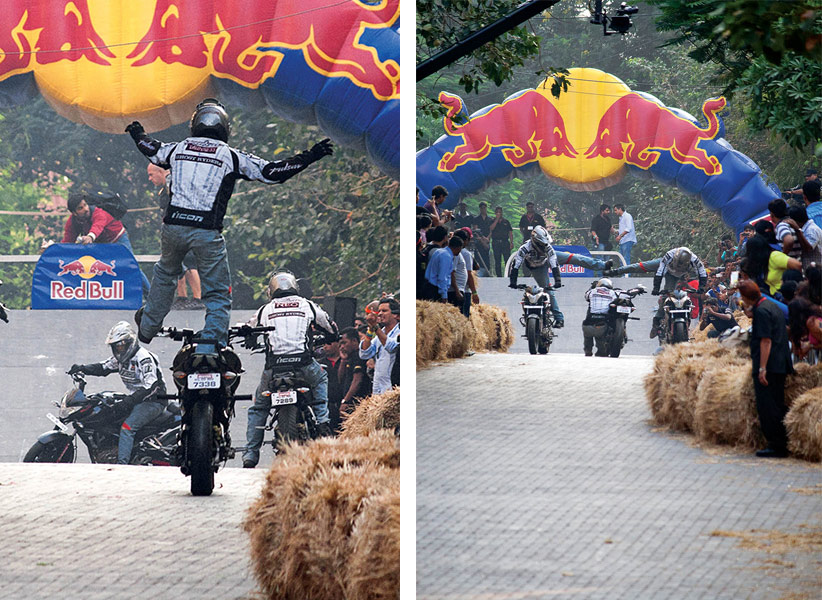 What Does The Society Think?
Stunt riding being a dangerous sport is definitely not for the faint-hearted and in the context of the Indian culture, it’s an even tougher choice. Fortunately, most of the riders I interviewed shared a similar story. One of the group’s riders, Akshay, said, “My family is very supportive and my elder brother is also into stunting and we both practise together. In the beginning we faced a lot of problems in getting sponsors, but Bajaj decided to sponsor us and ever since it’s been going well.”

Mikhil says, “When we started we had a few problems with the local police and the perception of the public, who thought we were a ‘useless lot’. But after all our hard work and the respect that we have for the sport, we’ve earned respect from the society and even my parents and girlfriend don’t have a problem with it. The main reason being that we ride with all our safety gear in place and lessen the risk factor.”

Who Is Their Idol?
Well, the answer to this question was unanimous: Chris Pfeiffer.