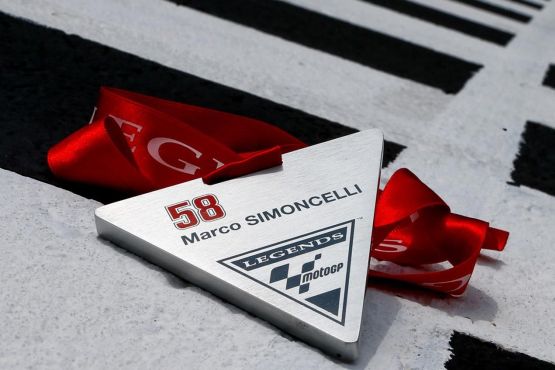 Simoncelli, A popular figure in the MotoGP paddock, tragically lost his lifei n 2011, during the second lap of the Malaysian Grand Prix. Dorna CEO Carmelo Ezpeleta officially inducted Marco as a MotoGP Legend at the Italian circuit, with Marco’s father Paolo Simoncelli present. Marco Simoncelli is the latest rider to receive grand prix motorcycle racing’s honor, since Casey Stoner was inducted to the Hall of Fame last year at Phillip Island.

Only 21 grand prix riders have received this honor, with Legends like Kevin Schwantz, Kenny Roberts Sr., and Giacomo Agostini being among them. In addition to being the 2008 250cc World Champion, Simoncelli’s record includes 15 pole positions, 31 podiums, and 14 victories across the three Grand Prix classes.