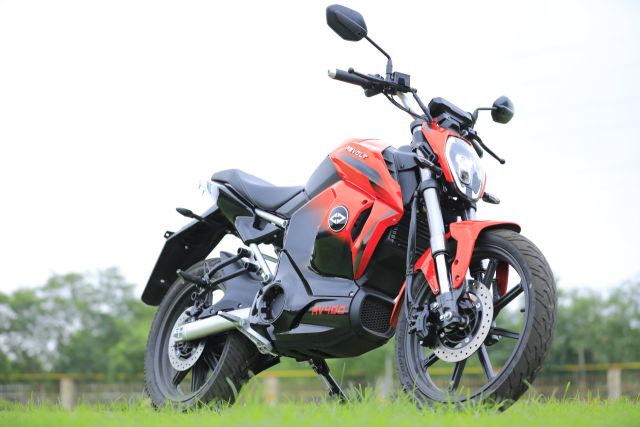 We rode the electric motorcycle, Revolt’s RV400, in Delhi recently. Here is what we think of this e-bike

The electric vehicle wave has been bullying its way into the research and development (R&D) departments of motorcycle manufacturers the world over. No bad thing here, as sustainable energy sure is the need of the hour for our dear celestal orb we call home. Recently, the country has seen a few teasers and launches of electric vehicles and even the much spoken of famous American cruiser company’s newest electric venture. However, there have been a few understandable fears with the electric concept when it comes to range and battery recharging, questioning the efficiency of owning such vehicles. 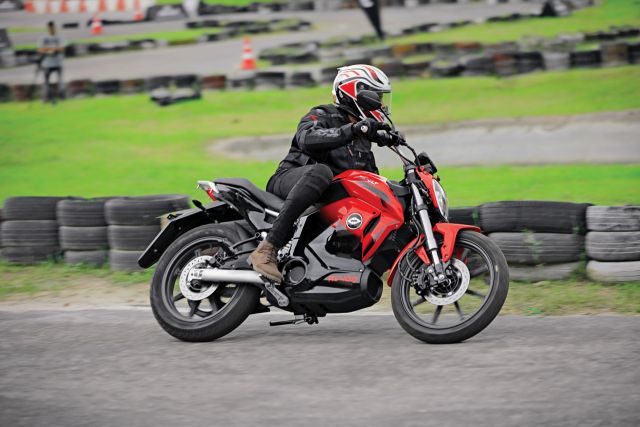 This is where Revolt Motors India have stepped in, with the RV400 offering an interesting solution to the problem. They have also thrown in a host of tech in an attempt to bridge the communication gap with them millennials. Has it worked? Well, in a way, yes; an example being that, as Revolt say, they are in the process of setting up “battery swap centres” where customers can swap their battery for a freshly charged unit. This can be a solution for electric vehicle commuting within the city, but will it be a feasible option for a motorcycle?

Let’s break it down.

Starting from the design aspect, you have a large oval hexagonal headlight that resembles a retro neo-café style and sits quite flat and neat against the upside-down front forks. The instrument console is a long rectangular unit which features a host of information, including the speedometer, ride modes, distance travelled, battery life, and more. The switchgear on the handlebar houses the regular controls for the start/stop switch, indicators, lights, horn, and also includes a three-way switch for the riding modes. Just behind the handlebar is a big power button that sits at the front of the tank. The tank, in turn, is just a cover under which you have the housing for the battery. 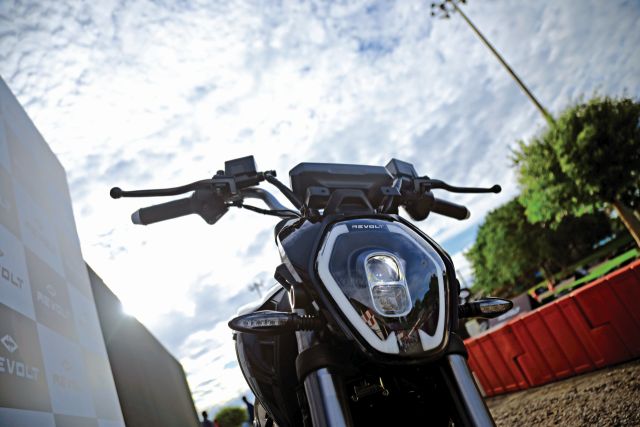 The main body work has the company’s badging and, with its vents and cuts, looks fairly sporty, ending with a conventional 2019 tail-tidy. For the rump you have a well-contoured seat that is quite comfortable and a rear seat that, though it looked small, turned out to be roomier than expected. For ground contact you get eight-spoked black alloy 17-inch wheels draped in MRF Zapper rubber.

Braking is done via 240-mm disc brakes both at the front and the rear, but you only get a combined braking system (CBS) and no anti-lock braking system (ABS). The front brake could have done with a little more bite and stopping power, for it did take a fair few yards to come to a standstill when the lever had been pulled in. The rear, however, did a better job and there was no locking on either front or rear whatsoever. 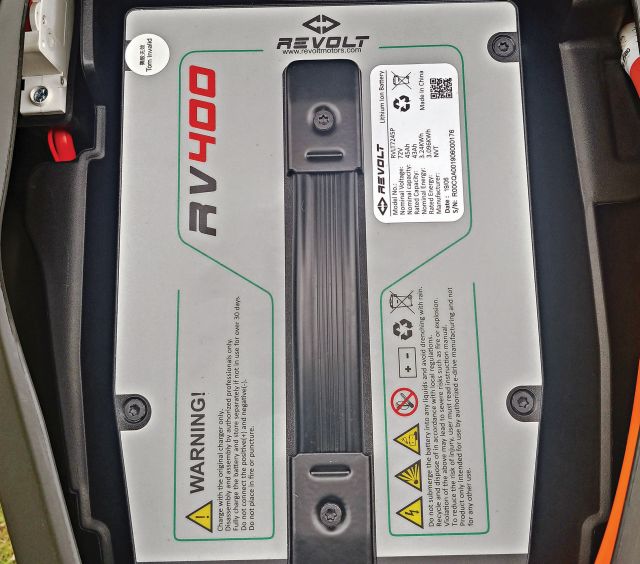 Suspension-wise, you get an upside-down fork that did feel a little stiff, especially when going over the two small speed humps put on the track by the Revolt crew. The rear has an adjustable monoshock which was set to the middle position when we rode it and, I’m happy to say, was quite comfortable. The RV400 handled fairly well, too, even with that heavy battery that sits quite high in the frame. A short 1,350-mm wheelbase and light weight of 108 kg made the bike a breeze on the tight go-kart track. Ergos are good, too, especially for such a small bike. My not so tall 5’ 9” did not feel cramped at all in the upright riding position with a very slight forward lean.

The RV400 has three riding modes – 1, 2, and 3 – which can be selected on the go via a switch on the handlebar. Setting 1 puts you in extreme economy mode with the speed capped at 45 km/h. Acceleration is very mellow, to say the least, and would be apt when stuck in a traffic snarl. Setting 2 tops out at 65 km/h and is probably the most usable mode for a new rider. I would advise it when riding in wet conditions, too, as it offers a linear throttle response combined with decent commuting speed. Setting 3 is the RV400’s “beast” mode. Well, an 85-km/h beast, that is. When we rode the RV400 around the go-kart track, I have to admit the bike in setting 3 was fun indeed. Being an electric motorcycle, the torque on tap is felt instantly when the bike is in mode 3. The torque, which feels around 10 to 15 Nm, kicks in instantly as you twist your wrist, giving you a little burst off the line. It does plateau out soon thereafter, but I found that the RV400 felt happier being ridden motocross style when in this mode. Hence, the fun on the go-kart track. 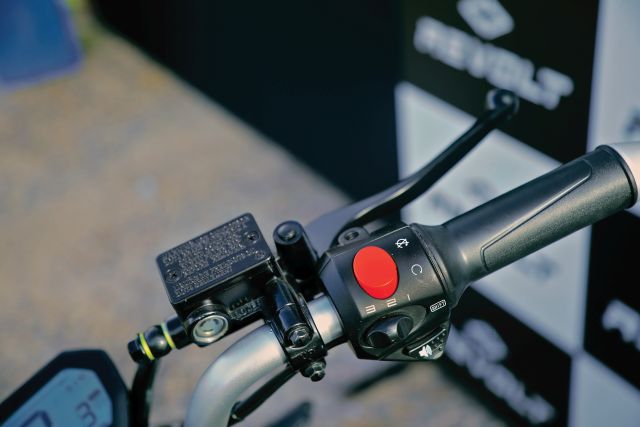 The range for each of these riding modes is 150-160 km for mode 1, 100-120 km for mode 2, and 80-90 km for mode 3. However, as Revolt themselves state, true range would depend on factors such as riding conditions, rider weight, and riding behaviour.

Revolt have spoken a lot about the connectivity of this new bike and there sure is a lot on the RV400. As you’d expect, download the Revolt app and, voilà, you will get all the regular information needed about your RV400 (ownership information, battery life and range, helpline, and more). Then the company decided to throw in other features such as Geo fencing which allows you to pre-set an area of mobility. Leave said area and the bike will shut off. It is a good security feature and is seen in some modern cars too. Revolt have also given you four pre-set engine sounds that you can choose from. These are Revolt, Roar, Rage, and Rebel. In addition, owners will be able to switch their RV400 on and off via the app (a little party trick for the youth).

The question still remains as to how Revolt plan to tackle the nagging problem of recharging batteries and the time taken to do so. Even though the Revolt battery is removable where it can be moved to a charging port, it is quite heavy at 18 kg. A solution to this would be the “battery swap” option discussed earlier. Revolt plan to start four such outlets in Delhi and Pune is the next city in their list. This system would need a fair bit of infrastructure and if Revolt can work out their battery numbers at these stations in relation to units sold and, importantly, the price, then the company can expect a fair bit of success. Revolt also offer delivery of batteries, but that option will only be available in an emergency situation initially. 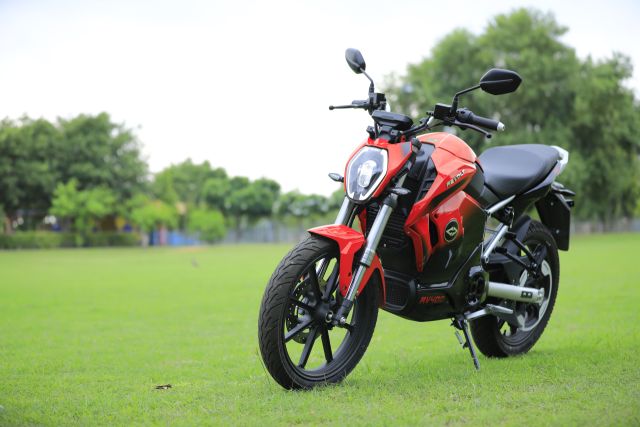 So, is the Revolt RV400 worth your money? At the moment, this is your only bet in the country for a commuter. The bike is comfortable, is a little fun, too, and will have all your hipster quinoa-loving friends put you on the top of their Christmas list. If electric vehicles are the future, well, then the future has arrived. Although our gas-guzzling, mean-sounding, happy-ending friends will still be our favourite.