Forget the unfounded tech debacle at the turn of the millennium, the name Y2K has another wholly different meaning for us bikers. Developed by Marine Turbine Technologies (MTT), the Y2K motorcycle is powered by a Rolls-Royce-Allison Model 250 turbine motor sourced form a helicopter and mated to a two-speed gearbox, which in-turn drove a shaft to a final chain-drive system. Although it was never intended to be a sales success, the Y2K was a technological tour-de-force that proved just what was possible on two wheels when one pushed the limits of creativity and engineering as far as it can possibly go. 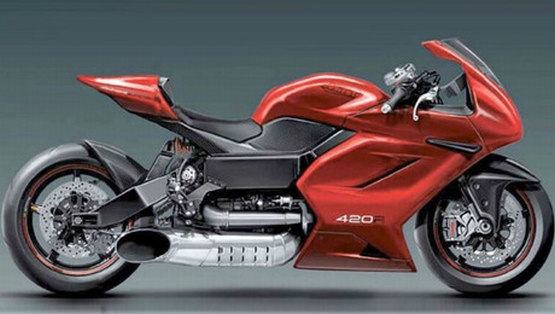 And now, the makers are at it again, pushing the envelope once more, with the 2013 MTT Y2K 420R. As you might have guessed by the new nomenclature, the 420R ups the power from an already monstrous 325PS to a stratospheric 425PS courtesy its new Rolls-Royce C-20B gas turbine engine. Also in the mix are carbon fibre wheels and fairings, radial-mounted calipers on the front brakes with ABS, and a monstrous 240mm rear tire. MTT are putting their penny on the fact that the Y2K will give a top speed figure of a 418+ Km/h. Now, all we need is someone brave enough to give it the full beans at the Bonneville Salt Flats.