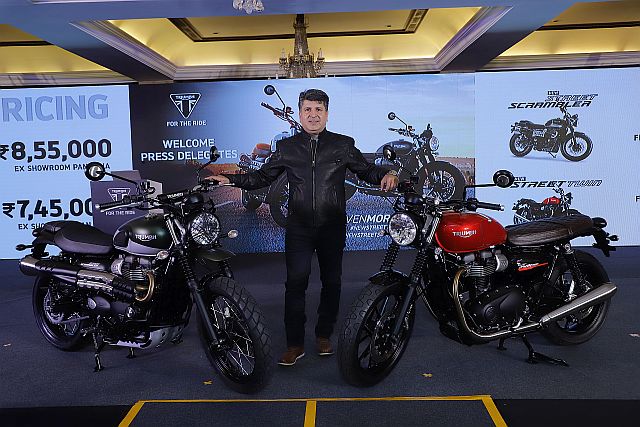 Triumph India General Manager, Shoeb Farooq reveals more details about the upcoming models from the Bajaj-Triumph alliance. They plan on targeting the market of the famous thumper in the 350-cc to 600-cc category.

A short while ago, Indian motorcycle giant Bajaj Auto and Triumph Motorcycles from the United Kingdom announced their signing of a joint venture. As per the latest info from Triumph India’s head, the plan for this partnership is for Triumph Motorcycles to design and develop a motorcycle and Bajaj, with their enormous base and manufacturing infrastructure in the country, to build said motorcycles. This would be an interesting and potentially fruitful alliance, as we would get Triumph’s engineering expertise at a reasonable price tag.

The joint venture was originally signed by both companies in August 2017, but, the fine print is still being completely ironed out. The 350-cc to 600-cc segment is a potential goldmine in India and some other foreign markets, with other manufacturers like Jawa and Harley-Davidson too, joining the bandwagon. All of which are gunning down the leader of the segment, the ol’ thumper, Royal Enfield.

It will be very interesting to see what the two companies launch, after all the last alliance that Bajaj undertook to address the 350-cc segment gave us the KTM 390 Duke. Touché Bajaj. Triumph and Bajaj, the ball is in your court, and we are eagerly waiting.