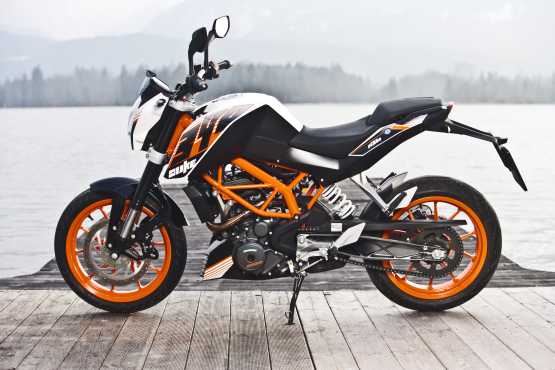 KTM’s latest naked street bike in the Duke lineage is placed between the 200 and 690 Dukes. It has the same design and chassis as the 125 and 200 Dukes and Bajaj Auto assemble all three of them at their Chakan plant, near Pune. So why were we flown half way across the globe to ride the 390 Duke if it is made right here in India? Because it is an all-new bike in spite of the shared platform and because it is an important motorcycle for KTM. The 390 Duke is KTM’s first global motorcycle, for it will be sold in all the 76 markets where the Austrian marque has its presence.

KTM tell us that there is good demand for 300-500 cc capacity bikes in the developed as well as emerging markets (Honda’s new line-up of 400 and 500 cc CB and CBR bikes and Kawasaki’s recently launched Ninja 300 prove the statement).

To capitalise on this demand, they developed a 375-cc, single-cylinder engine and placed it in the one-size-fits-all chassis of the smaller Dukes. The tubular steel trellis frame was strengthened to increase its load-bearing capacity and the bike is assembled by Bajaj in India along with the 125 and 200 Dukes to keep the cost down. 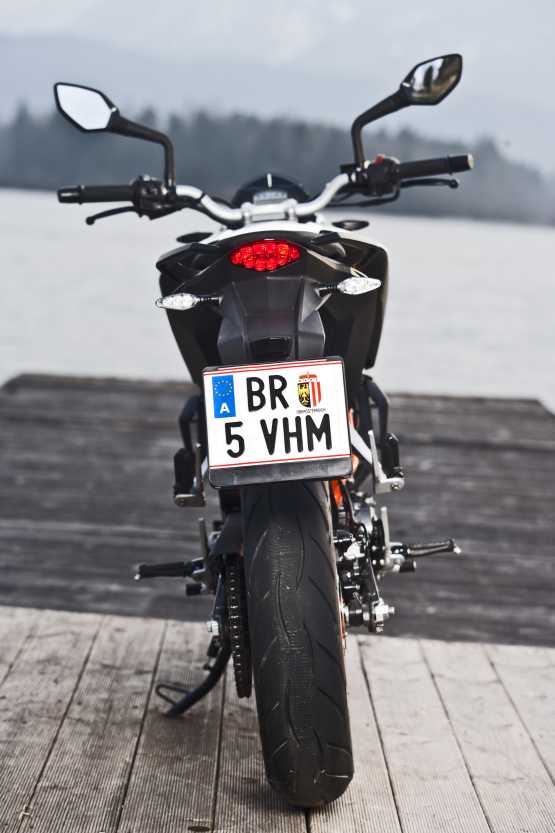 Bike India was invited for the world media launch of the 390 Duke in KTM’s home country, Austria, where we rode it in and around the city of Salzburg.

The bike has a striking new colour scheme and decals with bright orange frame and alloy wheels that give it a youthful and radical look. Fit, finish and the quality of the paint are of a high quality and the visual differences as compared to the 125/200 Dukes include the bar-end weights, the mechanism of the ABS system and the Metzeler Sportec M5 tyres.

In the saddle, the bike feels more or less the same as the 200 Duke as the two bikes share their chassis and body panels. There are a few minor changes in the 390 Duke’s dimensions such as the two millimetre shorter wheelbase, 10 mm lower seat height and five mm increase in ground clearance, from 165 to 170 mm. The riding position is upright, but comfortable and the rear-set foot-pegs lend the bike a sporty feel.

Upon firing the engine, it is instantly noticeable that the exhaust note of the 390 is louder and deeper than the 200’s and the increase in power is discernible as soon as the throttle is blipped. The all-new 375-cc, single-cylinder, liquid-cooled, DOHC, four-valve powerplant is an over-square engine, with a bore and stroke of 89 mm x 60 mm and is electronically restricted at 10,500 revolutions per minute. It produces an impressive 44.6 PS of power at 9,500 RPM and 35 Nm of torque at 7,250 RPM. Moreover, the bike weighs just 150 kg with all the fluids, giving it an impressive power-to-weight ratio of almost 300 PS/ton. 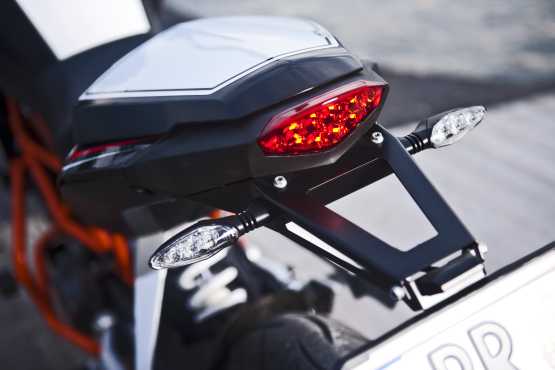 The 390 Duke leaps ahead with eagerness and its powerful engine and small size make it easy to manoeuvre through traffic. Starting from our hotel in downtown Salzburg, we were in the countryside in about 15 minutes. The average speed went up to three-digit figures once we hit the B roads (secondary highways), where the bike’s true potential could be experienced. The 390 Duke has phenomenal acceleration (0 to 100 km/h in less than six seconds, approximately), but the throttle response is predictable, so even average riders can control it easily.

The bike has a new six-speed gearbox with a one-down, five-up shift pattern. The first gear is very short, but the second, third and even the fourth are useful in city conditions. The engine is flexible in spite of being a 375-cc single, as it can be ridden at a speed as low as 60 km/h in the sixth gear without experiencing any snatching and it pulls strongly all the way up to its top speed.

We achieved a top speed of 165 km/h in the sixth gear while the blokes from KTM claim to have seen 171 km/h on the digital speedometer. Speaking of which, the 390 Duke’s orange backlit digital instrument display is identical to the 200’s and provides a world of information. However, due to the compact size of the screen, many of the readouts are difficult to read while riding. Coming back to the performance, the top speed may be marginally lower in India due to the difference in the quality of fuel, but the bike is still fast enough for Indian roads.

KTM have increased the size of the front disc rotor from 280 to 300 mm for the 390 Duke (compared to 200) while the rear one remains unchanged at 230 mm. The Bybre brakes provide ample stopping power and feature a centralised Bosch ABS system as standard fitment, which will be the case in the Indian version of the bike as well.

However, KTM let the rider make the decision whether to use it or not. There is a blank area under the ‘set’ button on the instrument panel, which hides the button for switching off the ABS. When the button is pressed for a few seconds, the ABS light starts blinking to indicate that it has been turned off. To switch it on again, the rider has to just turn the ignition off and then on once again. As simple as that. 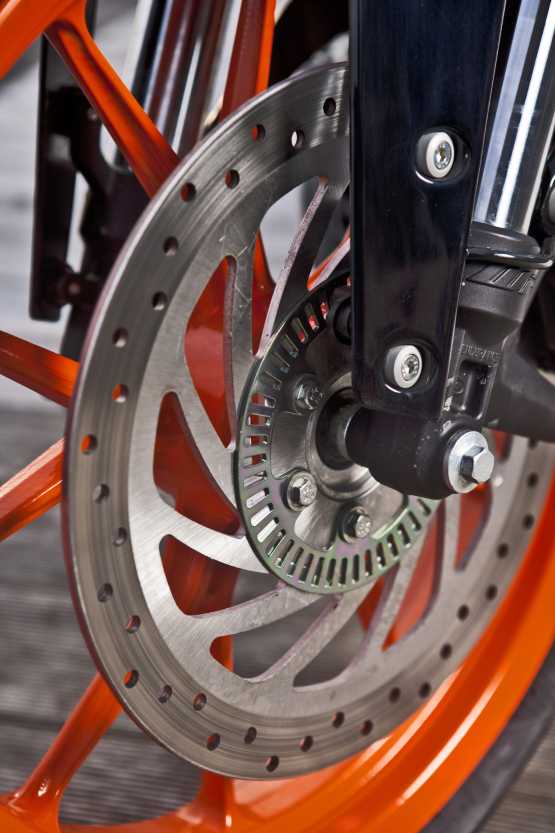 The 390 Duke manages long sweeping corners at three-digit speeds without the slightest hint of nervousness. The upright seating position of this bike isn’t exactly ideal for cornering, but it is easy to flick the bike around bends none the less and the standard Metzeler Sportec M5 tubeless tyres provide excellent traction even while riding on the edge. According to KTM, the Metzelers were chosen due to their consistent performance in varying weather conditions and the good news is that the Indian version of the bike too will get the Metzelers as standard fitment.

The 390 Duke, like its younger siblings, is equipped with WP’s USD front forks and a rear mono-shock, which had a stiff set-up on the launch bike in Austria. The R&D team assured us that the Indian bike would come with a softer suspension set-up, which will be the biggest change in the Indian bike as compared to its European counterpart. 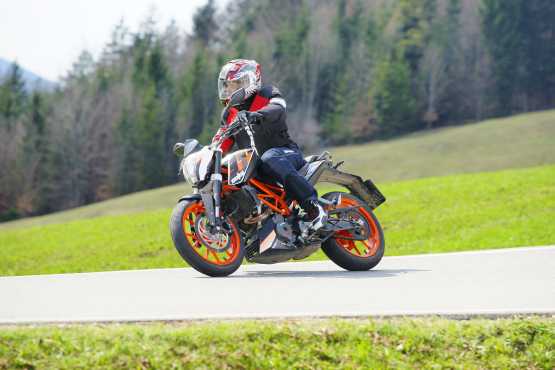 Our ride was a 260-km-long loop around Salzburg, which consumed almost the entire fuel in the 11-litre tank. The average fuel efficiency counter was flashing 24 km/l, but it must be considered that we had ridden the bike quite hard. 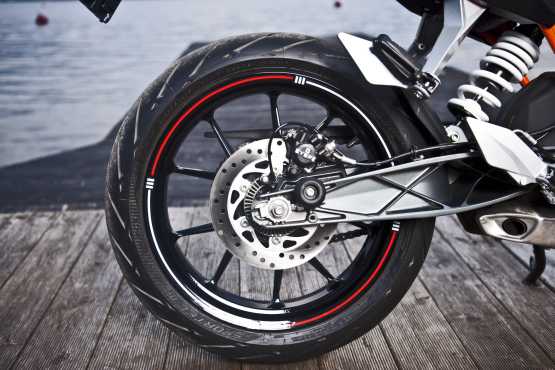 The 390 Duke’s upright riding position is not exactly touring friendly. However, I did not experience any body pain or fatigue in spite of the wind blast and none of my contact points were numb because the vibrations were negligible.

Bajaj have now launched the 390 Duke in India, with a killer introductory price of just Rs 1.8 lakh, ex-showroom, Pune. That translates to approximately Rs 1.985 lakh, on-road, which is a helluva deal for this machine, and is sure to give some other manufacturers sleepless nights.

The KTM 390 Duke sure looks the same as the 200, but it now gets an engine it always deserved. Along with the upgrades in equipment, it is the right package for the power-hungry urban enthusiast and at a competitive price.

“The philosophy behind the Duke 390 is that you have a bike which is very agile, sporty and easy riding. You have good comfort, because the riding position is very ergonomic. We have centralised all the mass so you can feel that the Duke 390 is easy handling. At the same time, we have taken care that it stays stable at high speeds. As you saw yesterday, it is fun to ride the bike. You feel safe.

“The Duke 125 is a bike for Europe due to the driving licence regulations. The engine is mainly designed to meet this (A2 licence) requirement. The 200 is a bike that is interesting in emerging markets like India, but other markets require 300-400 cc capacity. There, the requirement is 40-45 PS of power, so this (the 390 Duke) is something that is already fun and lot of people like to ride this bike. There is demand for 400 from Australia, the United States and, of course, India. We may not sell as many bikes as the 200 Duke in India, but we will have some customers who are interested in this bike. In my opinion, the gearbox gives you a very wide range. You can ride it in the city at 60 km/h in the sixth gear and once you are outside, just shift down two gears and blast ahead. We are also looking at competitors who have bikes in this segment and we found that they are selling good everywhere, so it is a global market. You can ride the 390 Duke to work every day and on the weekends you can go for a short 200-km ride in the mountains as we did yesterday. It is a perfect package. During the week, in the city you have easy handling, you can overtake cars very easily and on Sunday you go for fun.” 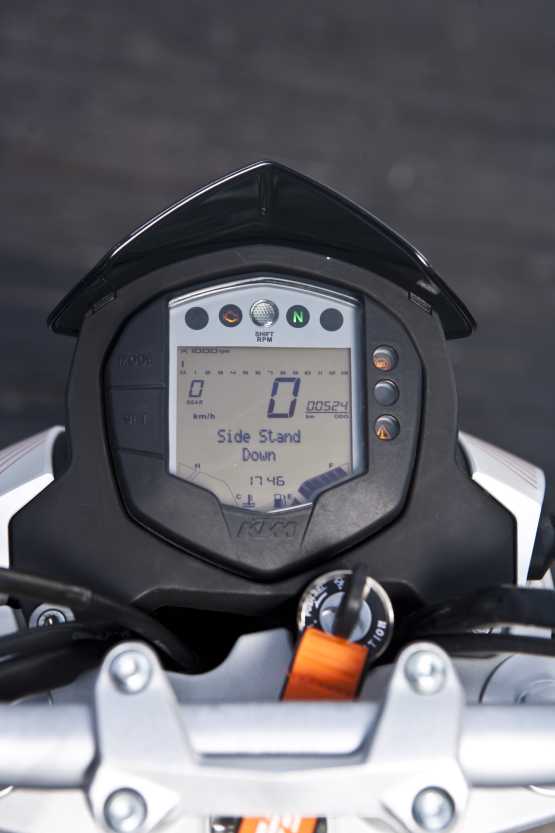 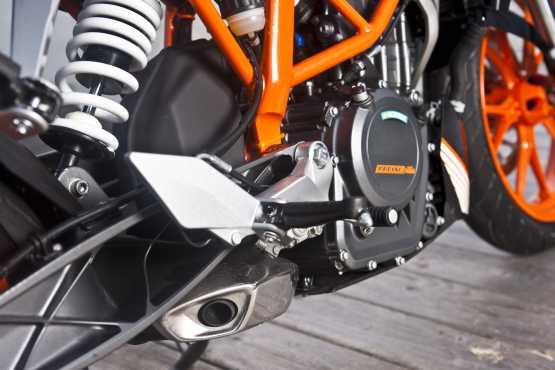