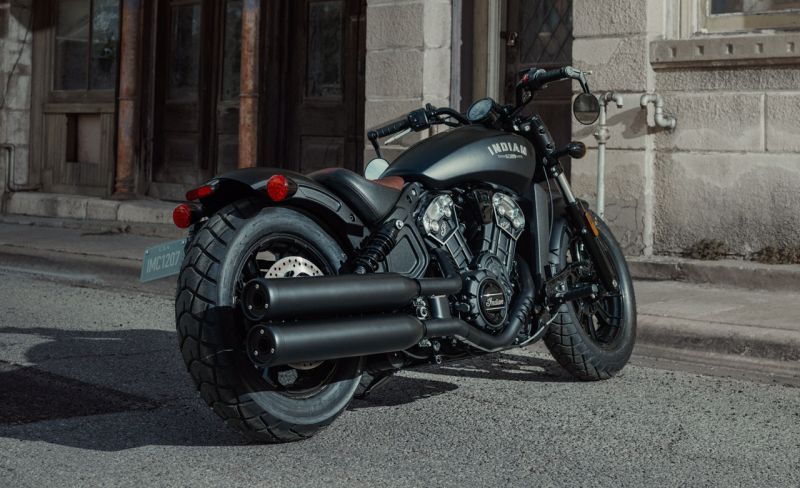 Indian Motorcycle add to their 2018 line-up with the all-new Indian Scout Bobber.
The motorcycle will make its way to India later this year but will go on sale in American markets from September onwards. We expect the Bobber to be priced slightly above the current Scout when it joins the regional product portfolio.

So far as looks are concerned, Indian have hit all the right notes with the Bobber. The rear suspension has been lowered to give the motorcycle a low-slung stance, in line with its retro nature. A fairly large portion of the motorcycle – from the instrument cluster to the exhaust pipes – has been given a blacked-out treatment, accentuating the raw appeal of the motorcycle. The front and rear fenders have also been chopped off to a bare minimum exposing knobby tyres which complete its menacing stance. Indian claim that the Bobber will have an aggressive seating position because the foot-pegs have been moved about 40 mm closer to the rider.

Another interesting aesthetic feature is the all-new tank badge. The Indian logo is now presented in block letters adding emphasis on the Scout badge right below it.

The Scout Bobber is powered by the same 1,131-cc engine that drives the Scout. The liquid-cooled V-Twin mated to a six-speed gearbox produces 101.6 PS and a peak torque of 97.7 Nm at 6,000 rpm. Braking duties are taken care of by a 298-mm disc at both ends. In spite of stripping it down to the essentials, it still weighs 251 kg.

In India, the Scout Bobber will compete with the Harley-Davidson Forty-Eight, the Moto Guzzi V9 Bobber and the Triumph Bonneville Bobber. Let’s hope the Scout Bobber is priced as aggressively as it looks.