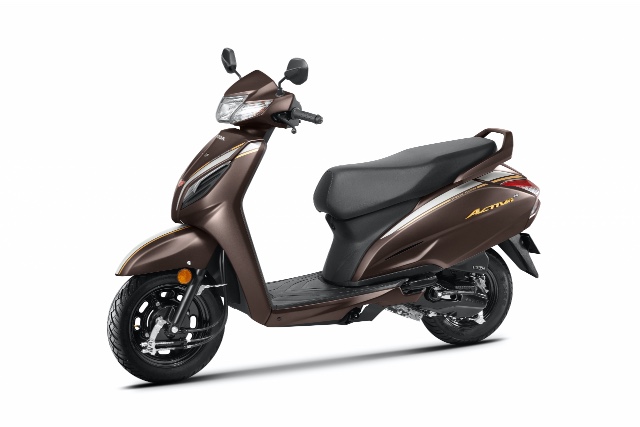 In the last two decades the Honda Active scooter has sold a staggering two crore units just in India. To acknowledge this massive achievement the company has launched the Honda Activa 6G 20th Anniversary Edition with some cosmetic updates.

To start with the new special edition Active 6G is available in a new Matte Mature Brown colour with matching rear grab-rails. As expected, it also gets a “20th Year Anniversary” emblem, a golden Activa logo and new decals on the front of the scooter. It still doesn’t get modern alloys, instead it runs on simple black steel wheels. Though we’d like to point out that it get a larger 12-inch front wheel and the usual 10-inch rear wheel. Other new bits include dark brown inner panels and seat cover, while the engine cover gets an all-black treatment.

Mechanically, the special edition is identical to the BS6 Honda Activa 6G and continues to depend on the tried-and-tested 110-cc fuel-injected HET (Honda Eco Technology) engine. The single-cylinder engine comes with Honda’s Enhanced Smart Power (eSP) and the surprisingly silent “ACG” starter. As you know, the Activa 6G comes equipped with a telescopic suspension and increased ground clearance, apart from other convenient features like an engine start/stop switch and an external fuel lid.