Harley-Davidson have unveiled their latest model, the Breakout, at the annual Daytona Bike Week motorcycle rally.

One of the most premium motorcycles in Harley’s lineup, the Breakout features a long and low stance, with a 240 mm wide rear tire, thick forks and chopped fenders. Motive power comes from a 1690cc engine churning out a tree-uprooting 130Nm of torque and mated to a 6-speed Cruise Drive gearbox.  Designed to be smooth, tight, and showcasing the engine and the tyres, the Breakout’s ensemble is completed by the shaved tank console and the drag handlebar on which the speedometer console rests. The motorcycle uses 10-spoke cast-aluminum Gasser wheels finished with gloss black powder coat. The bike also gets a gloss-black finish on the cast-aluminum oil tank, fork lowers, muffler shields, and the handlebars. To maintain a clean look the Breakout also uses a side-mounted license plate frame and combination stop/turn/tailights to leave the rear fender uncluttered.

“With Breakout we got down to motorcycle essentials, which means emphasising the powertrain and the wheels,” says Harley-Davidson Styling Manager Kirk Rasmussen. “The black and chrome engine visually pops out of the centre the bike, and then to maximise the impact of the tyres, the fenders are chopped. We wanted a lot of rubber showing to give the Breakout a tough, muscular look.”

Harley-Davidson is offering the Breakout with ABS and a proprietary factory-installed security system. 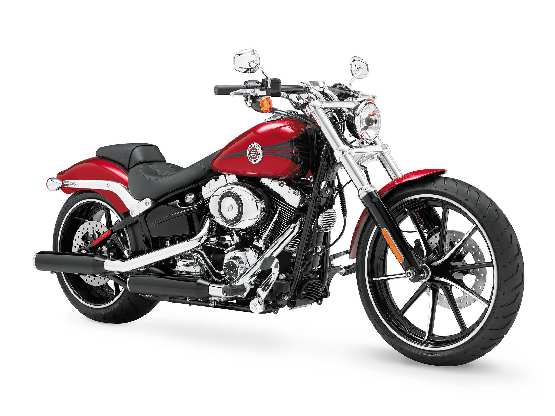 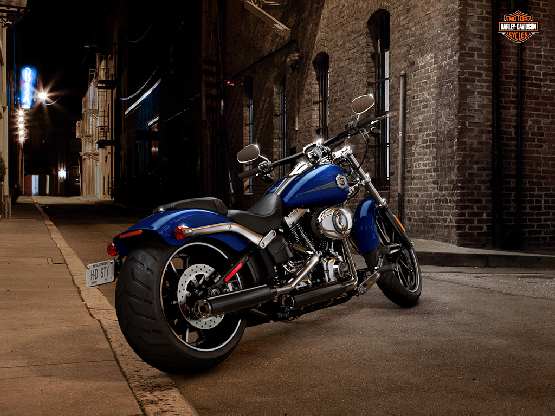