In a awe-inspiring homage to Mick Doohan and the Honda NSR500 with which he dominated GP racing in the 90s, Australian artist Eamon O’Toole have created an art installation of the bike exploded and suspended in thin air. Made of aluminium, plastic and paint, this sculpture is an exact replica of Mick Doohan‘s legendary racing bike with the so-called “Big Bang” engine, except that this one looks like it’s being blown into pieces together with the rider as in the real Big Bang theory in physics. The sculpture demonstrates the love for motorsports of its creator, who described it as, “a complex sculpture comprising thousands of parts joining to make up a whole and symbolic tribute to the true inherent nature of art and sport – the creativity of design, where the mechanical is modified to suit the needs of man.”

“The way the Doohan piece came about was that one of the bikes Mick rode had an engine configuration called the Big Bang. I wanted to make something that put Mick into that arena of something special and that nothing truly existed until he came along. I wanted him to be immortalised to some extent and that was the best way I could do that. That’s why it is an exploded three-dimensional drawing of Mick and the Bike,” Eamon added.

‘The Big Bang’ was created from over 300 components and took more than 600 hours to make the various components from heat moulded PVC and then suspending them from a 3D clothesline. Each part of the NSR500 has been created from magazine photos, drawings and painstaking online research. For the detailing, Eamon used enamel paints and finished it off with aluminium, gold and silver leaf. 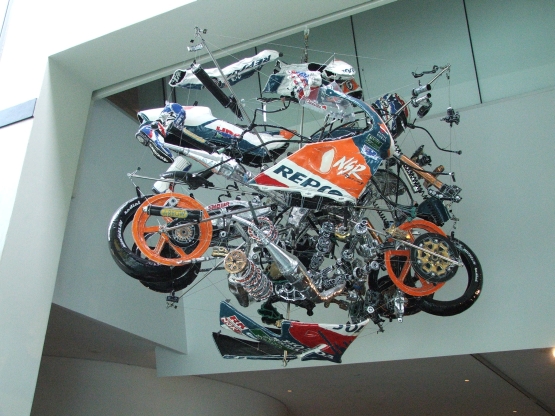