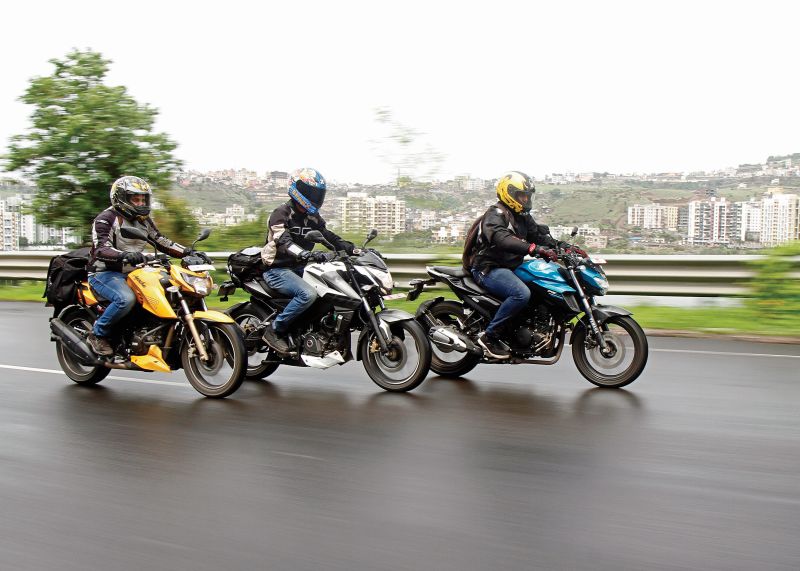 Yamaha’s 250 not just takes on other quarter-litre bikes, but strikes at the very similarly priced 200-cc machines as well. Enemy lines were drawn when Yamaha priced the FZ25, a 250-cc motorcycle, at just Rs 1.18 lakh (ex-showroom). This was neck to neck with smaller capacity bikes such as the TVS Apache RTR 200 4V (Rs 1 lakh) and Bajaj Pulsar NS 200 (Rs 96,000). We decided to test the mettle of the three best motorcycles aggressively priced at Rs 1 lakh. Starting from our place of work we battled the city traffic to reach the wide open highway, and finally did some sharp bending around corners to explore the scenic hill roads. All this to find out which one stands out. Here’s how it turned out to be.

All the three bikes have a sporty and muscular design that tugs at the heart of enthusiasts. The Yamaha is the youngest in this lot but its design isn’t really radical. It looks like a natural evolution of its popular younger sibling, the FZ16. The beautifully chiselled tank of this bike with its intricate tank extensions add muscle to the design. It has the capacity to carry 14 litres of fuel, which is a couple of litres more than the others. The good-looking exhaust is also similar to that of the FZ16. The small headlight and minimalistic rear design give it the mass-centralised look which works well for us.

Coming to the Apache RTR 200 4V. TVS took the Apache legacy forward when they launched the 200 last year. One can’t miss its TVS Racing DNA. It’s among the better looking bikes from their stable, with its edgy form. The razor-sharp tank and belly-pan look lethal; however, the wedged exhaust design doesn’t appeal to me and looks bare. I do like the off-set fuel filler lid, the split seat and ‘grinning’ headlight which make it the most radical among its rivals.

Speaking of rivals. The Pulsar NS 200 is the oldest here. It was launched about five years ago, phased out in the middle and resurrected yet again this year with some upgrades. Not much has changed in terms of design, apart from new body decals and dual-tone colour, which has slightly enhanced the style quotient. It has now got a two-piece fairing on the belly, which the older 200 didn’t. Overall, the NS 200 looks and feels bigger and bulkier than its competitors. 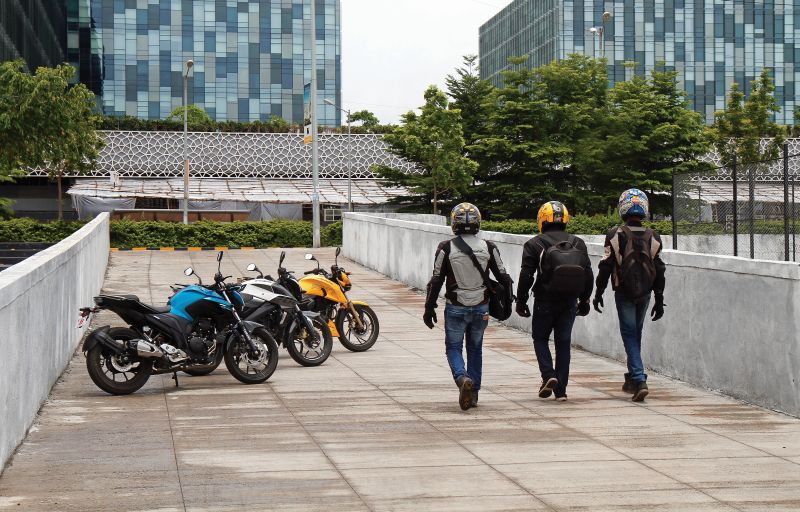 I compared the specs and realised that the Pulsar has the longest wheelbase, followed by the FZ25. Besides, it has the highest seat height of 804 millimetres, (9 mm more than FZ25). You sit lower on the Apache at 800 mm, which also happens to be the most comfortable. Not surprisingly, the Pulsar weighs more than its competition by four kilograms, with both the TVS and Yamaha tipping the scale at 148 kg.