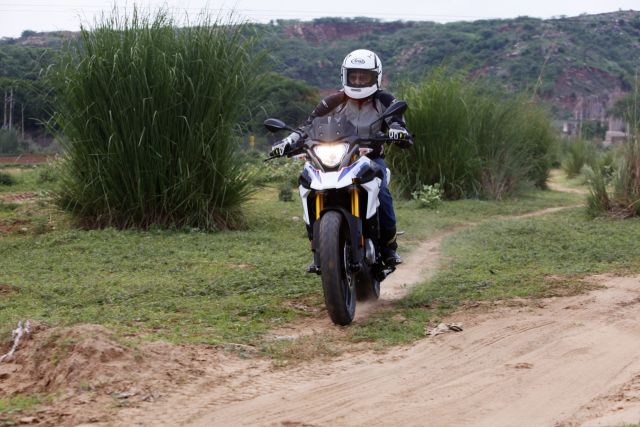 GOING OFF THE ROAD
It’s not meant to be an enduro but the GS doesn’t mind kicking some dust and clawing a bit of sand around. Riding over under-construction roads and through lush green fields, the longer wheelbase (up by 40 mm over the R) give it more stability. BMW Motorrad have achieved the 1,420 mm wheelbase by modifying the front wheel mount which has moved the front wheel axle further by an inch (the ‘R’ has the wheel mount under the front fork).
This tones down the handling sharpness a little bit, but, in return, helps this adventure bike remain stable as it tames broken paths and river crossings. Even the ABS on the GS can be turned off (only for the rear wheel) at the touch of a button, which allows the rear wheel to slide out on loose surface such as sand or gravel. Again, do keep in mind that this isn’t a hardcore off-roader, but with a longer suspension and dual-purpose Metzeler tyres, one can dare to be a lot more adventurous as compared to the G 310 R. 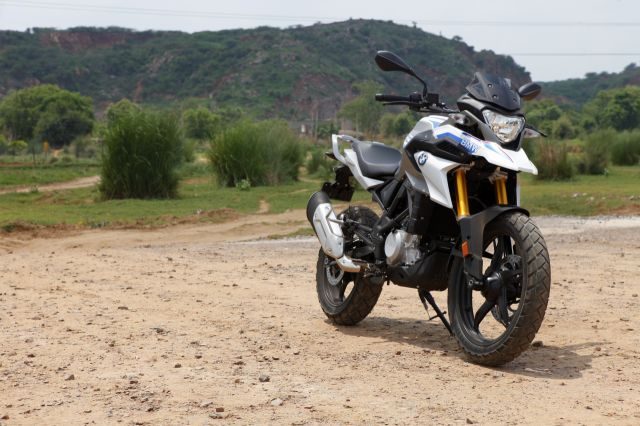 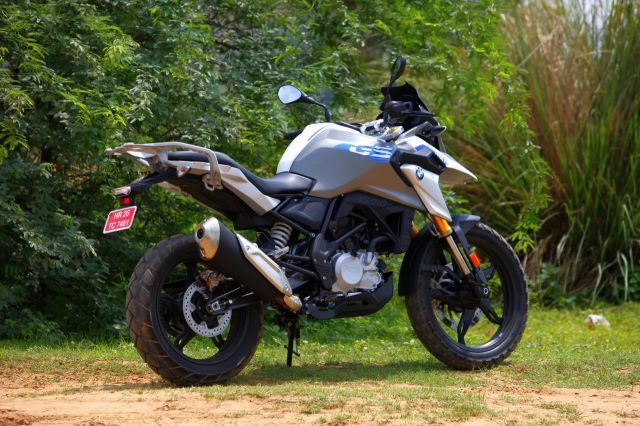 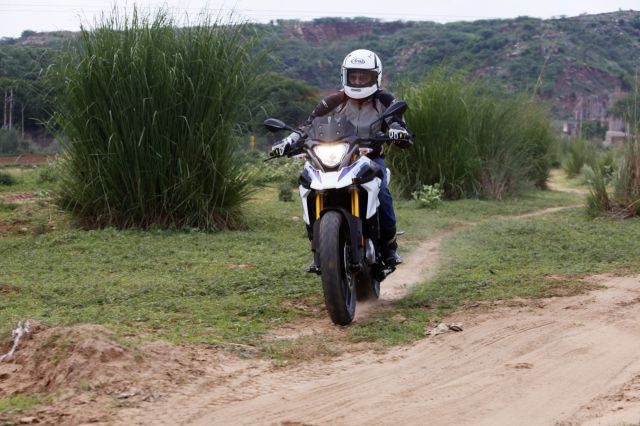 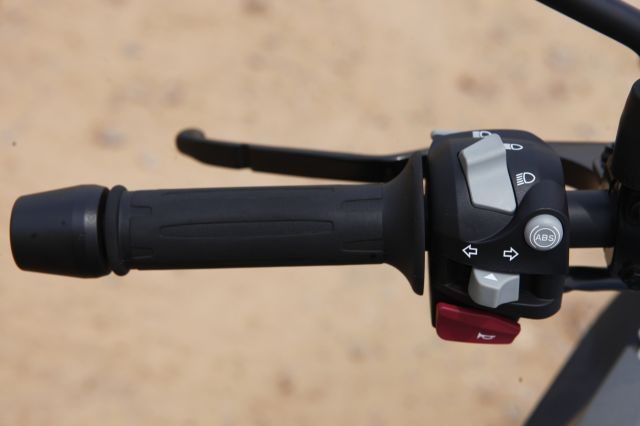 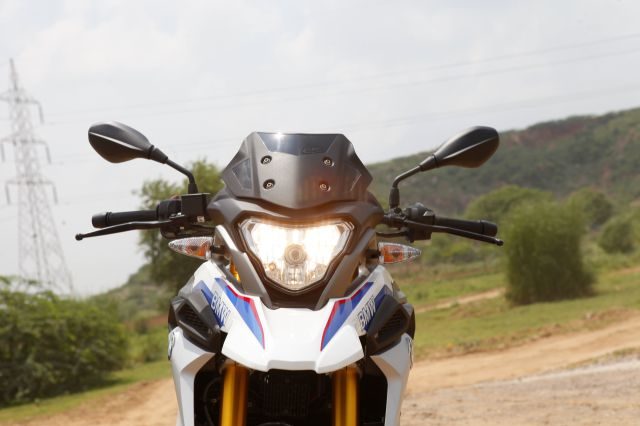 PERFORMANCE ON THE TARMAC
The tyres also offered decent grip on the bone-dry tarmac of our test route, though we reserve our judgement till we ride on some wet stretches. While riding on some not-so-well-maintained roads, the BMW G 310 GS practically irons out all road undulations – just stand on the pegs and throttle it out. It also feels a shade more mellow and mature, as it doesn’t have razor-sharp reflexes of the R. At 169.5 kg the GS weighs about the same as the fully-faired TVS Apache RR 310, and is 11 kg more than the G 310 R . For a taller and slightly heavier bike, the adventure tourer is fairly agile and fun to fool around with. The size of the bike, which is neither too big or too small, will make it very manageable to live with day to day. Unlike full-sized adventure bikes, the 310 GS is easy to pull out of a parking lot and manoeuvre around. As you would have guessed, with the additional weight and taller stance, the 313-cc single takes a bit longer to reach the 80-km/h mark. The performance is adequate for the size of the bike and since there’s no sudden spike, it feels ideal for the tourer.

POWERTRAIN
And that brings us to the performance of the BMW G 310 GS. The four-valve, 313-cc single-cylinder engine is identical to the G 310 R, and produces a decent 34 PS at 9,500 rpm and 28 Nm at 7,500 rpm. The engine layout is also different from run-of-the-mill bikes, as it has been rotated 180-degrees and also tilts backwards to improve the weight distribution and, hence, aids handling. The power delivery, however, isn’t manic like the KTM 390s but comes in a smooth fashion, but without any lag. The six-speed gearbox shifts are effortless at slow speeds and even when the engine is revved out. Plus there’s a good spread of torque which ensures there aren’t any dull spots. But what I like most about this large capacity single is the motor’s tractable nature. You can be a bit lazy and keep it slotted even in fourth gear while slowing down to city riding speeds, and yet it manages to pull along without protest. On the other hand, this puny adventure bike can even cruise at three-digit speeds in comfort, covering long distances with fewer breaks and, most importantly, without inflicting a sore back. IT CAN’T BE PERFECT…
Obviously, it’s not. Firstly, for the price BMW are demanding, we really wish the G 310 GS came equipped with a slipper clutch. Since it’s a large-capacity single, there are some engine vibrations, but the counter-balancer makes sure that it isn’t a deal breaker. But for a premium motorcycle, the engine clatter during low revs is quite surprising. This seems to be the backlash noise of the oil- and water-pump drives, and the sound tends to fade away as you speed up.
The exhaust note is surprisingly sporting for a single as it roars right from the moment the engine comes alive and reaches its crescendo around the 5,000-rpm mark. Speaking of which the 310, for a single, is a quick bike to ride. Not the fastest, but exciting enough. We haven’t tested the bike yet, but it did manage to hit 80 km/h in a respectable time. More importantly, you can ride the BMW G 310 GS all day holding at 120 km/h without stressing the engine or generating unbearable heat.

PRICE MATTERS
The G 310 GS carries a premium price tag of Rs 3.49 lakh (ex-showroom). That’s Rs 50,000 more than its naked roadster sibling G 310 R but still undercuts the Kawasaki Versys-X 300 by about Rs 1.10 lakh. In spite of the hefty price, I strongly feel the GS will outsell the R version in India for its sheer presence and decent off-roading ability.
As you spend more time with the BMWs, you will learn to appreciate the detailing and the brilliant use of different textures. The overall touch, feel, and general quality seems to be more superior than most other bikes mass produced in India. So, if you are a wee bit hesitant to sign on the dotted line, remember the G 310 GS has not been built for the price tag, but to match the legendary standards of BMW Motorrad.