Errr… why are we featuring a car here? Well, Alfa Romeo recently launched the MiTo Quadrifoglio Verde SBK Limited Edition car to show their support for the FIM Superbike World Championship – of which Alfa Romeo has been the sponsor for the last seven years. Alfa Romeo also provides the official safety car for the championship and has decided to produce just 28 of this beauty and plan to sell them only in the UK.

At the launch of the limited edition MiTo SBK, precision driver Paul Swift took on superbiker Chris ‘The Stalker’ Walker in a cat-and-mouse driving dare.

The MiTo Quadrifoglio Verde SBK Limited Edition is only available in Solid Black with an Alfa Red roof, and is priced at £21,595 (Rs. 1.8 Million). 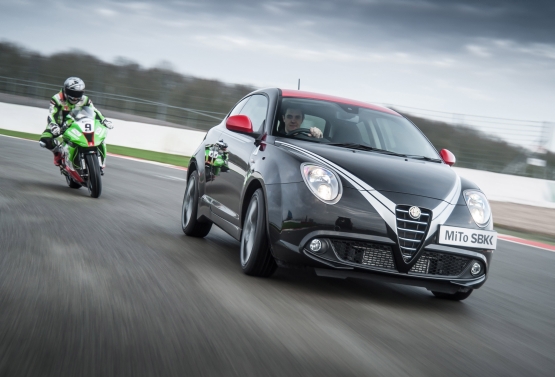