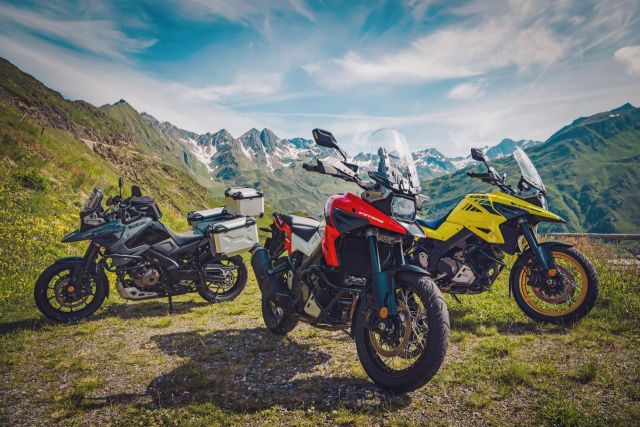 Japanese brand Suzuki gave us a detailed look at what the latest generation of their V-Strom 1050 adventurer-tourer looks like at EICMA, and have also had the top-of-the-line V-Strom 1050 XT on display.

The V-Strom has always been Suzuki’s biggest, baddest adventure bike and it has been given a proper revamp for its 2020 iteration in the form of the V-Strom 1050 range. Here’s everything you need to know about the new V-Strom and its XT flagship model.

This latest version of the V-Strom has been inspired by Suzuki’s legendary DR-Z desert racer and DR Big in terms of design. Distinctive features include a new rectangular LED headlight that has an old-school charm. The tank gets a bit more muscle with additional shrouds and the bike’s distinctive beak melds straight into the tank. This creates a busy, athletic design language that looks butch pays homage to brand’s storied ADVs of the 80s.

The engine powering the V-Strom 1050 is the same as before – a 1037-cc 90° V-twin. However, it has been upgraded for 2020. Upgrades include the following: “reprofiled intake and exhaust cams, with increased lift duration and less overlap. Twin-plug heads remain, along with lightweight three-ring-type forged pistons. A new radiator increases cooling capacity by 15%, and there is a new oil cooler. A slipper clutch aids smoother downshifts and lighter lever action.” What does all that equate to? Euro5 compliance and a 7% increase in peak power. The V-Strom 1050 churns out a 107 hp at full chat. 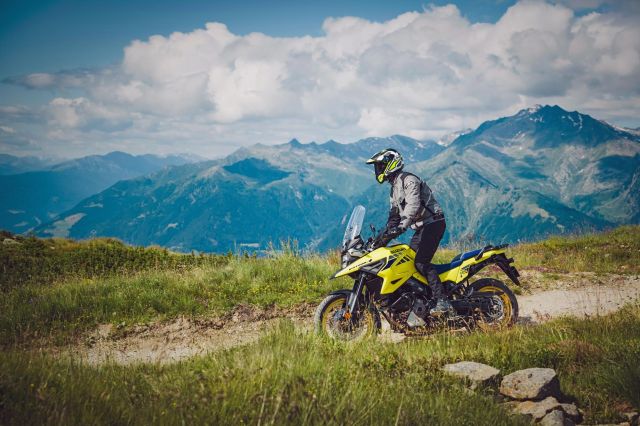 There’s No Doubt the V-Strom 1050 is Adventure-Ready

The new V-Strom 1050 gets all the kit you would want from a big continent-crushing adventure tourer. It gets a twin-spar aluminium frame mated to an aluminium swingarm to keep the bike’s weight down. Suspension duties are performed by fully-adjustable 43-mm USF forms from KYB, and a monoshock that is adjustable for preload and rebound damping. There’s a lightweight, wide handlebar to grab on to which gets a fresh ergonomics-friendly approach for when you’re sitting down or standing up. The footrests have been redesigned for greater ease when standing and toughened up as well. The wheels are 19-inchers up front and 17-inch wheels at the rear with Bridgestone Battlax Adventure A41 radial tyres.

The V-Strom 1050 Gets Updated Electronics

As with a lot of the modern 1000-cc plus premium adventure tourers, the V-Strom 1050 gets a comprehensive electronics suite called Suzuki Intelligent Ride System (SIRS). This includes ride-by-wire throttle and a six-axis IMU from Bosch. So you get combined braking, lean-sensitive ABS, two ABS modes, three traction control modes, three engine modes and hill-hold assist. Another interesting feature of SIRS is slope-dependent control which “optimises pressure across the front and rear brakes to maintain control and avoid rear-wheel lift under heavy braking downhill.” Oddly specific but could prove useful in a tight spot. There’s also load-dependent control which allows the ABS to optimize braking based on changes in load from the addition or removal of luggage or a pillion. You also get cruise control as part of the electronics suite. The V-Strom 1050 XT features all the extra goodies seeing as it is the top-spec model in the range. These goodies include the entire electronics package as opposed to the standard variant which only gets three-mode traction control and the three engine modes and no SIRS. It also gets cast-aluminium wheels rather than spoked wheels, and loses out on LED indicators and even has different mirrors. While the XT gets an 11-step adjustable windscreen that you can set up on the fly, the standard 1050 only gets three-step adjustability and you need to break out the toolkit to set it in place. Furthermore, it comes in only black, grey and white colour-schemes.

No official word yet on when the V-Strom 1050 will come to India or if it will come at all. We do expect it to eventually make it way here and be priced in the Rs 14-16 lakh bracket like its predecessor.