We test the BS6 TVS Jupiter Classic, the top-end variant of this scooter, to tell you all about how it fares on our streets. 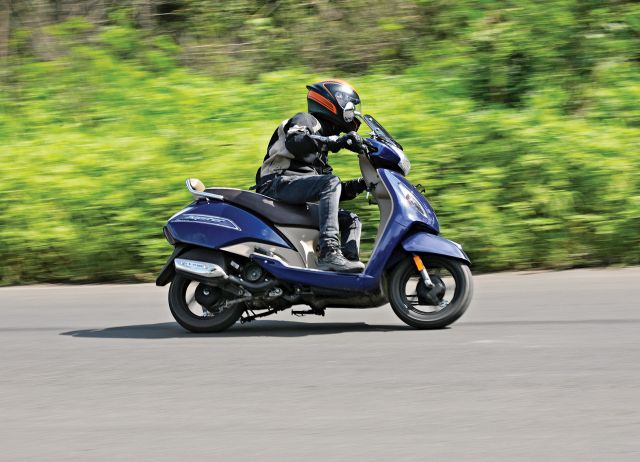 A variety of scooters are available in the Indian market, but very few of them have gained popularity or appealed to the Indian customers. The TVS Jupiter was originally launched in 2013 and since then it has made quite a name for itself. Just 30 months after its launch, over 10 lakh units of this scooter were sold, making it one of the fastest to reach those sales figures in such a short span of time. In 2017, the manufacturer revealed that the Jupiter had crossed the 20-lakh sales milestone and, one year later, announced that sales were catching up with the most popular scooter in India, Honda Activa. 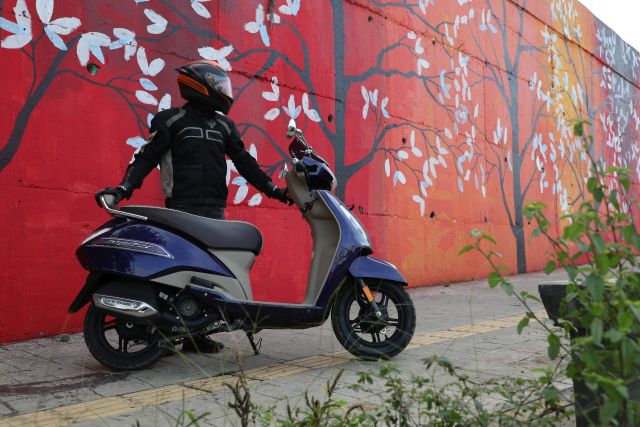 The BS6 TVS Jupiter Classic sports the same design seen on the BS4 model. The scooter is immediately distinguishable and it stands out because of the large windscreen and chrome mirrors at the front. It also sports a dual-tone seat as well as a cushioned back-rest for the pillion. The model we got for our road test sported a new blue colour scheme, called Indiblue, and also had “Classic” decals around it in a definitive font. This paint job is neat and bright, further highlighting the classic element of the scooter. The floorboard area for the rider and the bodywork, which is usually blacked out on most scooters, gets a beige colour that runs through the bodywork and this gives the scooter a more premium look and feel. 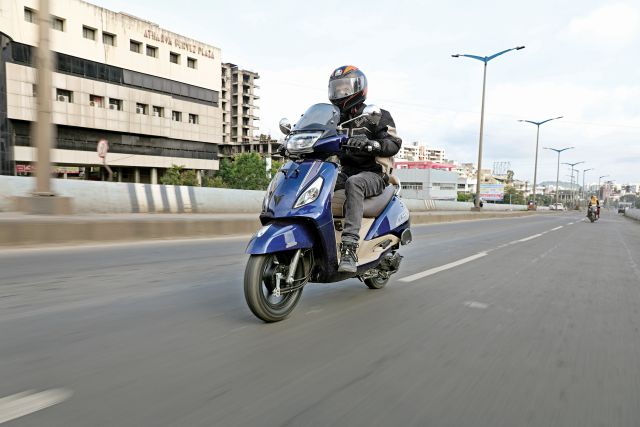 The BS6-compliant 109.7-cc engine is the main upgrade in the scooter which now gets an ET-Fi (Eco Thrust Fuel injection) system. With the transition to BS6, the company is now using two new fuel-injection platforms: RT-Fi and ET-Fi. Since RT-Fi is a performance-spec fuel-injection system, TVS have decided to go with ET-Fi for the Jupiter and they claim that it now offers a 15 per cent better fuel efficiency than its predecessor. The 109.7-cc engine puts out 7.3 hp at 7,000 rpm and a peak torque of 8.4 Nm at 5,500 rpm. The engine is now more refined, quieter, and makes for a really enjoyable ride around the city. 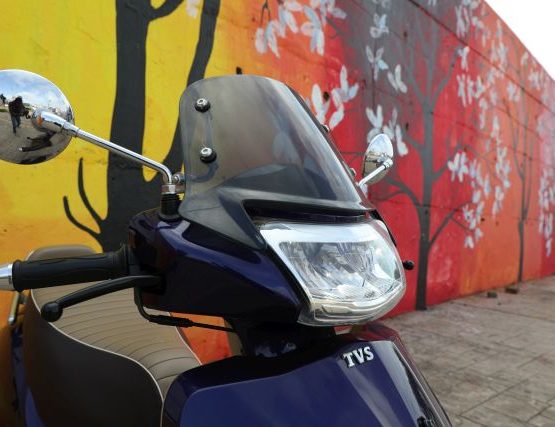 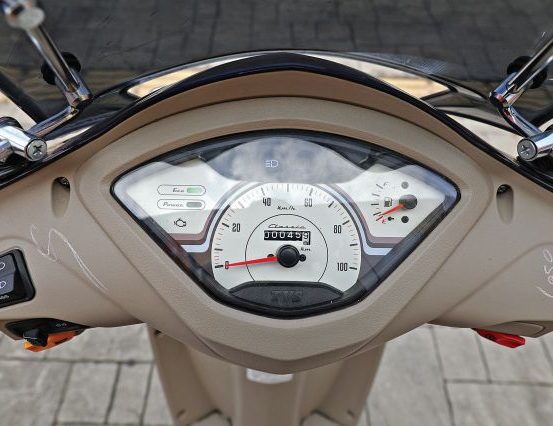 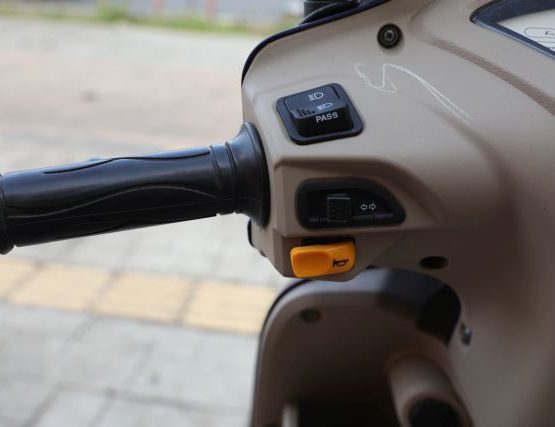 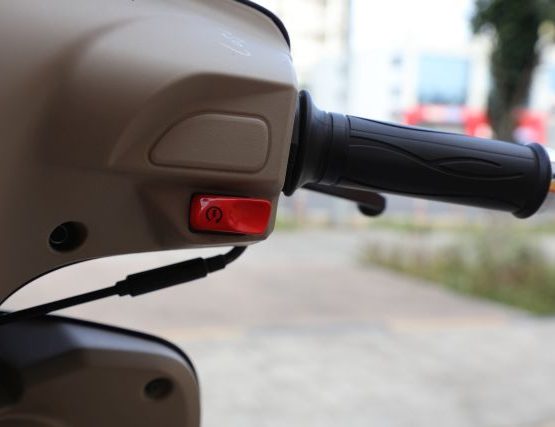 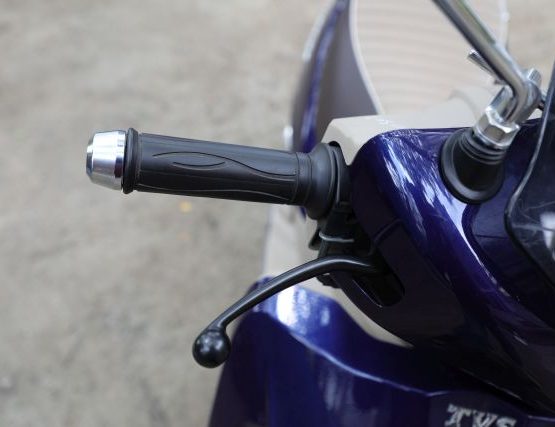 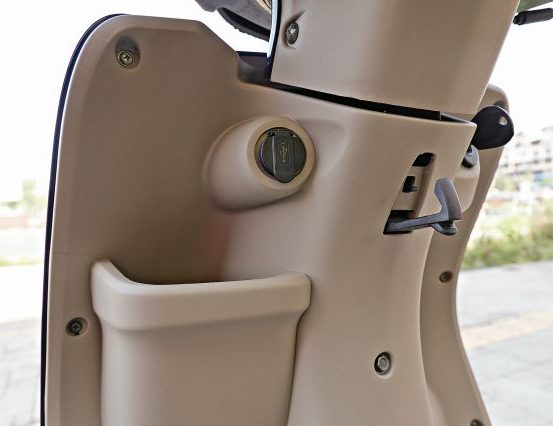 Apart from being a classic looker, the Jupiter is a delight to ride on account of the way it handles. The scooter inspires a lot of confidence and flows through corners with poise. Its suspension set-up consists of telescopic forks at the front and a three-step adjustable monoshock at the rear. With a kerb weight of 109 kilograms, the Jupiter feels light and easy to manoeuvre and to move around in and out of parking spots. The cushioned seat and back-rest provide a comfortable ride for the rider as well as the pillion.

Even though the Classic variant of the scooter is priced the highest, it does not get a disc brake at the front; however, its drum brake set-up works quite well and makes the scooter come to a quick halt in any situation due to the SBT system which activates a part of the front brake when the rear one is applied. Braking from 80 km/h to a standstill takes 3.67 seconds in 38.58 metres, while braking from 40 km/h to 0 km/h is achieved in 1.94 seconds and 9.36 metres. A factor that will appeal to many is the convenience that the scooter offers. For starters, it gets a small storage space at the front for a mobile phone, wallet or any of the knick-knacks that are required while on the move. The dashboard also gets an Eco and a Power light for users who want to get the best mileage out of the scooter. Then we get a USB charger, which is placed just on top of the storage compartment at the front. At the rear we get a large 21-litre under-seat storage with the fuel-tank cap placed outside, making for a convenient trip to the petrol pump. The under-seat storage also gets an OBD (on-board diagnostics) port which will make it easier while the scooter is being serviced or checked. This is the top variant of the Jupiter and it is priced at Rs 70,052 (ex-showroom), thus making it about Rs 7,000 more expensive than the standard model. This is an attractive price considering all the features that the scooter offers. We still feel that the scooter could be offered with a disc brake at the front, which would also make it a complete package. That being said, it is still a great scooter to own because of how stable it feels and how well it handles.