We give the Benelli TRK 502 a workout, both on tarmac and off it 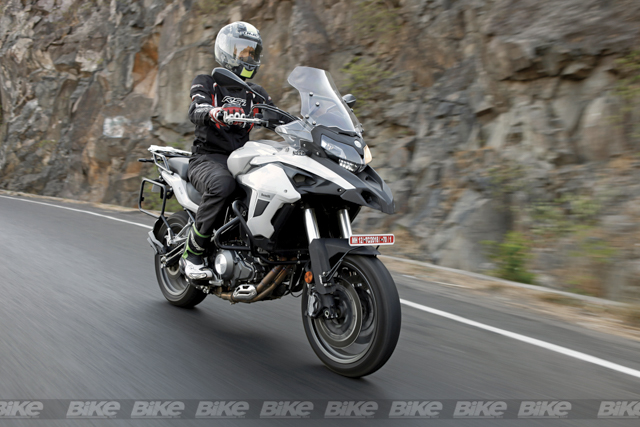 Fellow riders and car drivers checked their mirrors for the source of the howl and quickly made way to let me through. Personally, I am not used to such road presence but that day I was astride the newest Benelli in town, the TRK 502, and, honestly, I was enjoying the attention. 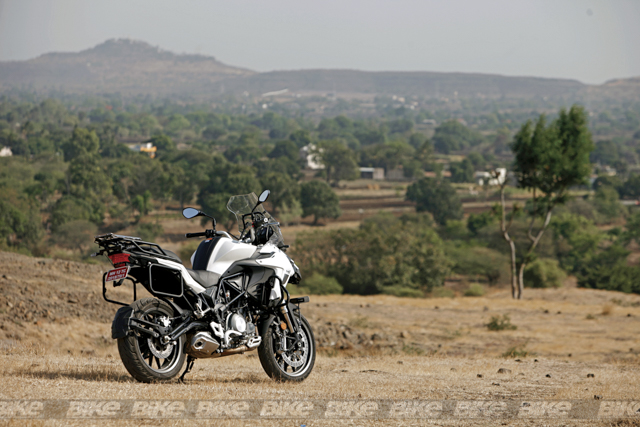 The TRK twins are the Chinese-owned Italian manufacturer’s latest addition to their Indian line-up. Unlike the rest of the motorcycles in their portfolio, the TRKs have no direct rivals because they are the only 500-cc, parallel-twin, adventure tourers in the market. Certainly a point in their favour, especially when they are easily mistaken for larger European motorcycles at first glance. 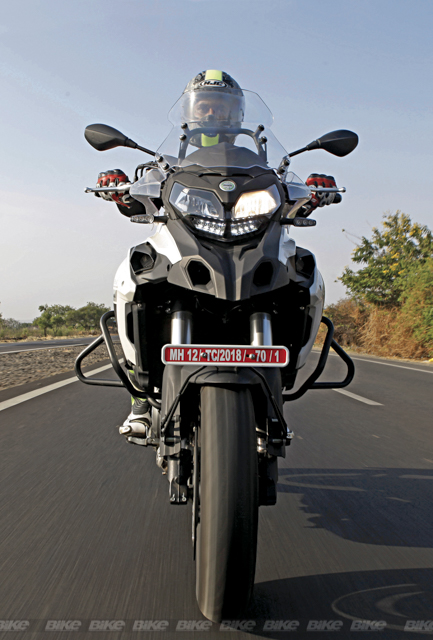 The long, sharp beak, headlamp, large windscreen and beefy USD fork give the TRK the same angry-avian look that is quite popular in this segment. Said beak merges into a fairly wide three-quarter fairing on either side of the massive 20-litre fuel-tank. Meanwhile, the exposed trellis frame and stocky tail-end along with the robust crash-guards round off the motorcycle’s muscular stance. Attractive, in an aggressive way. The only let-down in the styling department are the rather dated, plain instrument cluster (if you are into modern-day TFTs) and switchgear of average quality.

There is no doubt that the TRK 502 is a big motorcycle but it is most evident when you swing a leg over it. The well-contoured, spacious saddle felt plush and was perfect for the motorcycle’s relaxed rider triangle. Although the TRK is not wrapped in the silk of refinement, Benelli have done a commendable job of keeping vibrations at bay. In fact, it was only close to 7,000 rpm that I began to feel them at all through the rubber-topped foot-pegs and it was far from intrusive. Similarly, the heat from the engine is channelled to exit just behind the rider’s legs; quite thoughtful.

Before moving on to the TRK’s road and off-road manners, let’s take a look at its equipment list. Mounted within the trellis frame is the 500-cc, liquid-cooled, DOHC, eight-valve, parallel-twin engine. This motor churns out 47.5 PS at 8,500 rpm, a peak torque of 46 Nm at 6,000 rpm, and is mated to a six-speed gearbox. Soaking up the bumps are a 50-mm USD telescopic fork at the front and a monoshock (preload and rebound adjustable) at the rear. Meanwhile, braking is handled by dual 320-mm floating discs up front, bitten by four-piston calipers, and the rear is managed by a 260-mm disc. There is dual-channel switchable ABS involved, of course. 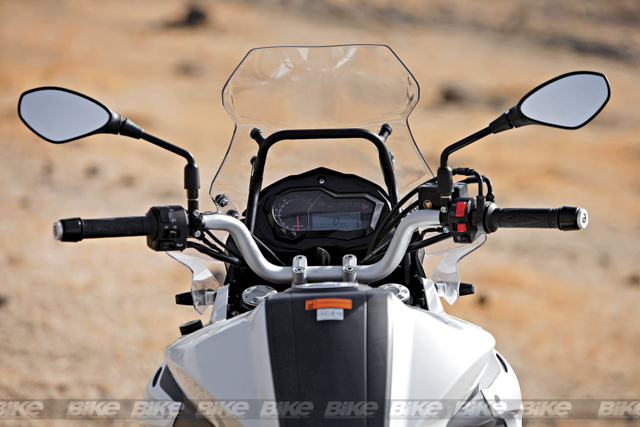 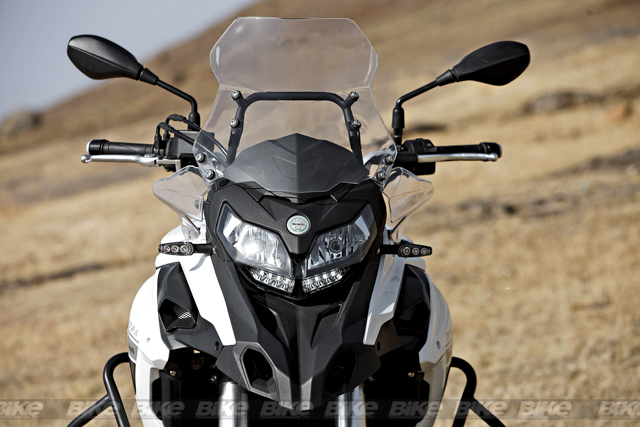 Fairly satisfied with the brochure, I fired up the TRK and headed out for an early morning ride. Throttling through the revs, I could not help but appreciate the TRK’s exhaust note, which howled more like an excited in-line four than the parallel-twin concert I was expecting. The engine’s character itself was also similarly surprising. Instead of producing low-end grunt to supplement its ADV duties, the TRK 502 felt remarkably relaxed below the 4,000-rpm mark. From there, it powered to the red-line like a dog chasing its feline nemesis. Benelli have made up for this uncanny torque band with short gearing, allowing the TRK to pull away in sixth gear at 40 km/h from as low as 2,000 rpm. At full sprint, we even managed to dismiss 0-60 km/h in 2.88 seconds with a top speed of 150.87 km/h. 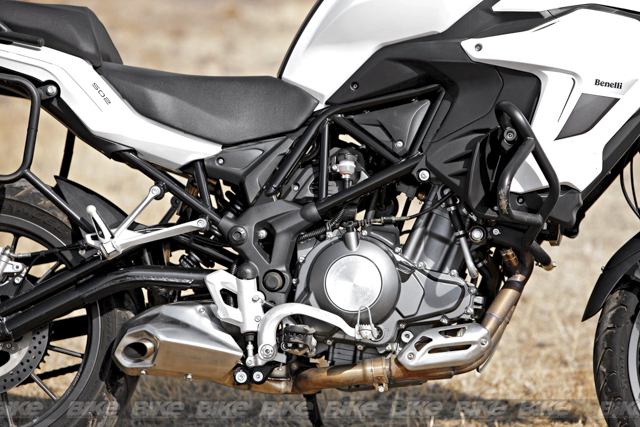 The broad fairing and windscreen did a remarkable job of keeping me insulated from wind-blast and gave me confidence to carry triple-digit speeds on the highway for a longer time without tiring myself. When it came to shedding that speed in a hurry, the TRK did not disappoint. While the calipers have great bite and the ABS functions to a T, the system would have been perfect if there were more feel at the lever. We were able to bring the motorcycle to a standstill from 80 km/h within 34.80 metres in 3.06 seconds. 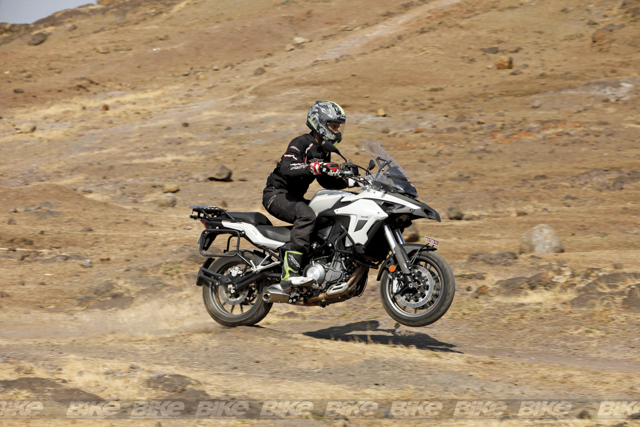 The TRK’s behaviour on switchbacks was equally stable. The wide handlebar allows good leverage for relaxed rider input and the motorcycle tips into corners without fuss; holding the line with poise and confidence, aided by the Pirelli Angel ST rubber. The suspension set-up is on the firmer side but it has proved itself capable on both highways and twisties. Fairly well-equipped to munch miles on tarmac, I would say. Off-road, it was a different story. The lack of low-end torque, stiff suspension and, most importantly, the motorcycle’s sheer weight (235 kg) discouraged me from venturing off deep into the trails. Perhaps, that is best left to the more off-road-focused TRK 502X.

Overall, the Benelli TRK 502 has everything that a small (relatively), long-distance touring motorcycle requires but is let down by its heft. If you can look past that wrinkle, then the TRK 502 is a good, comfortable motorcycle that can handle everyday use and will easily take care of long road trips as well. At Rs 5.10 lakh (ex-showroom), the TRK 502 is not exactly wooing customers by the dozen but if it had been about one lakh rupees cheaper, it would have certainly made a strong case for itself.